Dugas scores big on the moose hunt - By David Field


Josh Dugas is an experienced hunter when it comes to deer and bear.  However, his name was drawn this spring for the chance at a moose.  According to his father Joe, they picked Zone 12 because of its nearness to Windham and they had a friend’s camp in the area they could stay in.

“We went up the Saturday before and scouted the whole day and Sunday too.  We never saw a moose.”  Joe Dugas had done a bunch of scouting late in September and early in October in addition to this.  “This year’s second season is a week later and the rut was over.  We had a bull permit and they weren’t responding to calls at all.”  Josh, his father and a group of friends went out on Monday, Columbus Day, in search of an elusive target in Grafton.  The day was finished with not even a sighting of either sex moose. 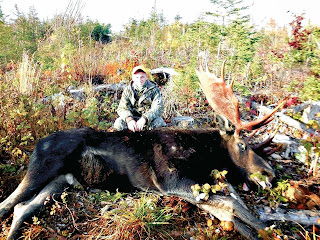 On Tuesday, Joe and Josh headed by ATV two miles into the woods and hiked an additional half mile hunting for a bull in a different area in Grafton.  They called for two hours at their location and nothing responded nor showed.  Around 8 a.m, they headed out to try their luck in another location.  They saw a bull in another area that had been cleared about 200 yards out.  With the wind at their backs the moose got antsy.  Joe worked the call while he encouraged Josh to take a shot if a good opportunity presented itself.

At 8:15 a.m, Josh squeezed off a couple of rounds from his Remington .270 and watched the moose disappear.  After a few minutes, the search was on in the slash of a 3-year-old cutting.  With the moose located, the real work began.

It took some time to get the gear from the truck to get the moose out of the cutting.  While those preparations were being made, work had to be done to eviscerate the moose.  With the help of friend Chris Sterling, that got done and the hauling process began.  The team finally got the moose to the road around 1 p.m.  They then headed to Roxbury to tag their prize.

At the tagging station, the measurements began.  Josh’s moose weighed 800 pounds and had an antler spread of 53 inches.  The Dugas’s were very appreciative of the great help they had from the great people in their party.

Josh Dugas is a junior at Windham High School and plays soccer, is the place kicker on the football team, plays basketball and baseball.
Posted by Michelle Libby at 9:16 PM