A seventh inning, 3-run homer not enough against Noble girls - By Stephanie Coffin


The Lady Eagles hosted Noble High School on senior night for Windham softball.  The Eagles lost 11-5 despite a seventh inning home run by Madison Elliott.  Elliott racked up three RBIs on one hit for the Eagles. 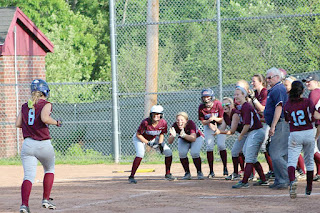 Danielle Tardiff took the loss for Windham.  She allowed eight runs in five innings, walked four and struck out six.  Gower got the win for Noble.  She allowed four runs over seven innings. She struck out six, walked three and surrendered four hits.

After scoring four runs in the first on two singles, Noble kept the lead from Windham.  Two runs in the bottom of the fourth helped the Lady Eagles spring to life and close the score 3-2 when two errors from Noble occurred.  However, Noble’s Gower was able to get Lauren Talbot to fly out to end the threat.

A three-run home run by Madison Elliott fueled the Lady Eagles' comeback when Noble’s Gower once again ended the inning and game by getting Olivia Mora to ground out.

Posted by Michelle Libby at 8:13 PM