University of Maine at Farmington women's cross country coach, Scott Hutchinson, earned his first win as the Beavers took home the number one spot at the 2015 Husson Invitational. 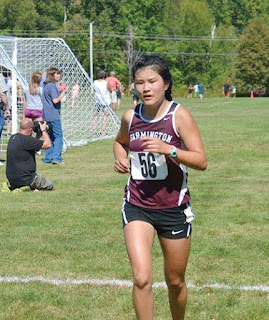 The Beavers earned a score of 52 points for the top spot, finishing two points ahead of Maine Maritime with Husson, Castleton, and Elms rounding out the top five.

Workmanlike performances were turned in by the entire UMF team starting with sophomore Laura Pulito who finished seventh with a time of 22:39.2 and junior Emma Pidden who secured tenth place with a 23:05.2 in the 5K run on the Husson home course.

Sophomore Alisha Labbe nipped at Pidden’s heels in 11th and junior Anna Dowling finished in 19th  place. Windham’s own Gwen Baker, UMF freshman, rounded out the scoring with a solid 24:08.9 in twentieth position.

UMF claimed the Husson Invitational title by beating out eight schools in a field of 83 runners according to the Track and Field Results Reporting System.

UMaine - Farmington will compete in the Bowdoin Invitational on Saturday, September 12.

Posted by Michelle Libby at 5:52 PM