It is said, that it is not winning - but how you play the game, that matters. This couldn’t be closer to the truth when it comes to the Windham Eagles Unified Basketball Team. On Monday, January 30th, those Eagles soared onto the basketball court of Windham High School for the first time. Coming off a 48-20 Knights loss in their first away game, against the Poland Knights three days before, the Eagles were looking for redemption -figuratively speaking. When referring to the game of Unified Basketball, there are no expectations, no criticisms and no foul play.

“These players are only out there to have fun,” expressed Co-coach and Middle School special education teacher, Brittany Taylor. The Unified Basketball Team is comprised of students with and without developmental disabilities. “There are five players on the court at all times. Three have developmental disabilities and the two that do not, are what we call Partners,” explains Taylor. 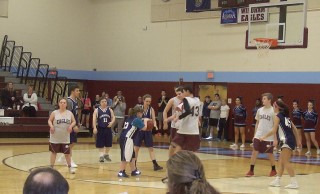 “Those athletes are here volunteering their time when they are not playing winter varsity basketball.”
All this is made possible by the existence of the MPA (Maine Principals Association), a Division of Interscholastic Activities (for member high schools). But without the added support of individuals like School Principal, Christopher Howell/Athletic Director, Richard Drummond/ Athletic Trainer, Casey Sinclair and countless others - this would not have come to fruition. “It has really been a collaborative effort on all parts and Lisa Garneau (Special Education Director) has also played a big role,” said Drummond.

The logistics can be overwhelming: Securing a schedule for the team, lining up transportation, putting coaches in place, finding student helpers, securing gym time in an already busy winter season; as well as finding game workers and game officials. Add to this, managing day-to-day items with the program, as well as publicizing it. “That is what we do as a department for all our teams and offerings but with this being so new it requires a little extra attention,” continued Drummond.

That attention was well placed. The game would begin with a supportive and unsuspecting crowd looking on. The Clippers would score first, building just a small lead before Eagles’ number 50, worn by James Tucker, would score the team’s first two-pointer. With both teams adjusting to their objective, the first half saw both teams driving toward their perspective hoops with many exciting and crowd pleasing steals along the way. To this end, the Eagles would put together four good scoring drives, giving them eight points at the end of the half.  The Clippers’ players would enjoy their own success, scoring 17 points that included a three pointer by Colin Cook.

With a half time score of 17-8, it was time for the Eagles to regroup. Players received accolades for their efforts and a few pointers from the Partners and Coaches. “Partners are supportive of the kids, providing guidance and pep-talks during, as well as before the game,” stated Taylor. As they had done in their first game, the Eagles would enjoy a stronger showing in the second half. “They played and looked like an entirely different team,” said Taylor with excitement.

Both teams would battle right down to the closing buzzer. With less than five minutes to go, the Eagles managed to get within three points and at one time, took the lead by two. Then with the scored tied with less than two minutes left, the excited crowd saw the lead change back and forth. In the final minute - with the fans, coaches and players cheering for each player, the Clippers would score what proved to be the decisive basket for a final score of 33-31. 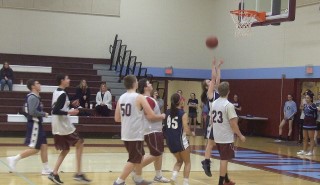 Despite last week’s loss the Eagles showed their true colors. It also helped being home. “The last game was our first, so the kids were nervous about being away, in unknown territory, so it was all new to them. I think getting a taste of the first game last week gave them confidence knowing that this game they are home, it’s where their family and friends are. They played with all their hearts,” shared Taylor.

Preparing this team for next week is no different than any other team. “We have practice on Friday and we made notes of things we need to work on and will target those areas like, defense and rebounds,” continued Taylor.

Sharing his final thoughts of the game Drummond said, “Through a collaborative effort we have been able to provide a great opportunity for some students in our district. The return on this program is impacting so many people in a positive manner. It’s the best thing I’ve done. It’s awesome.”
Eagles Co-coach Anne Baker also expressed the importance of this program, “It’s so nice to be able to bring both schools together in unity.”

The Eagles’ next game is away, against the Westbrook Blue Blazes: Friday, Feb.10th at 4 p.m.
FMI visit:  www.mpa.cc
Posted by The Windham Eagle at 2:00 AM