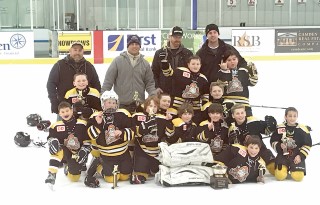 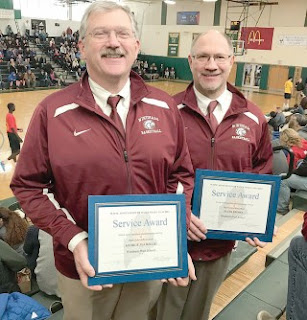 Coach George McCrillis and Coach Peter Brown receiving the MABC Service award for 9 years of coaching at Windham High School
Posted by The Windham Eagle at 2:00 AM No comments: 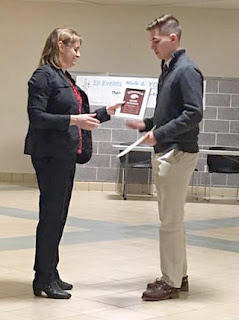 A heartfelt congratulation goes to Jeremy Bennet for receiving the Boys Track Most Valuable Player Award. Bennet will run track at Bates College next year.

The first ever season of the unified basketball team came to a close with a home game played on March 6, against the Lewiston Blue Devils. In typical fashion, the game began with the same enthusiasm from both teams.

There was just one exception from the typical: This was also Senior Day at the high school. In a brief ceremony, the only senior on the Eagles’ team, Anne Stuchbury, received a red rose at center court from Co-coaches Brittany Taylor and Anne Blake, much to the approval of the fans.

Then it was business as usual. First half action did not disappoint as both teams took little time to put points on the scoreboard. Without the use of timeouts, these games are fast paced and just fly by, making scoring a tiresome effort. Even when substitutes enter the game, the clock keeps ticking. The team that makes the best of use of the clock definitely has the advantage. In the first half that advantage went to the Blue Devils. They would go into the second half with a 36-27 lead.

During half-time senior Anne Stuchbury was brought to center court by her coaches. Surrounded by her teammates and with the help of the Blue Devils and the fans, “Happy Birthday” was sung to a surprised Stuchbury. This was definitely her day and an unforgettable one at that.

In the second half, the Blue Devils did not gain as many points as they did in the first; and the Eagles almost doubled their score. But it would prove to be, just not quite enough to result in a victory. With the clock winding down and time running out, the Eagles would score the final two points of the season with less than a minute to go. The points amassed by both teams equaled 118, with a final score of 67 for the Blue Devils and the Eagles at 51 points.

After the game Taylor reflected on the season. “I think it was awesome! It was so much fun. The kids loved it and we had a good time.” The kids improved every game and with just one senior on next year’s squad their future looks bright. “It was a blast and can’t wait for next year,” concluded Taylor.

There is action next week on March 15, in the form of a festival to be held at Yarmouth. Rather than being a game, all teams will have a choice to participate in either a playoff format or round robin. It has not yet been determined which teams will be participating in either format. The time has also not yet been solidified.

FMI visit: www.windham.k12.me.us/
Posted by The Windham Eagle at 2:00 AM No comments: 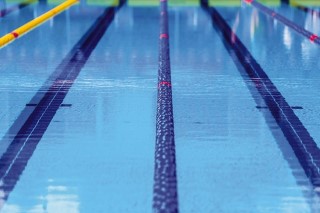 Monday and Tuesday of February vacation proved to be exciting and successful days for the Windham Swim Team, led by Coach Pete Small, Coach Brett Turrenne and Coach Kevin Roy.
On Monday, the Windham boys kicked off the day with the 200 IM Relay, led by 3 seniors: Francis Watson, Ben Breton and James Mannette and freshman Evan Desmond. During the day the boys had excellent events, with many personal records achieved. James Mannette placed 15th overall in the 200 Free and Evan Desmond had an outstanding 50 Free time of 25.33 seconds. Not only does Ben Breton run fast, he also swims fast - anchoring the 200 Free Relay Team and dropping time in the 100 breaststroke. The 2016-17 season ended with the 400 Free Relay Team of: James Mannette, Michael Ryan, Ben Breton and Evan Desmond dropping 11 seconds to place 13th overall.

On Tuesday, the Windham girls were ready to continue the boys’ momentum, with the 200 IM Relay Team comprised of: Sophie Simonson, Camilla Moltoni, Olivia Verrill and Hannah Maurais. The distance swimmer - junior Elizabeth Lucas took significant time off both the 200 Free and 500 Free races; freshman Katharyn Lucas placed 13th overall, with an outstanding swim in the 200 IM, while Senior Olivia Verrill had a tremendous performance, dropping 2 seconds in the 100 Butterfly. The 200 Free Relay Team of: Freshman Chloe Wilcox, junior Sophie Simonson, freshman Hannah Maurais and freshman Katharyn Lucas, broke the 2 minute mark finishing with a time of 1:59.66.

The 400 Free Relay Team of Wilcox, Maurais, E. Lucas and K. Lucas ended the day with a 10 second time drop.

When asked about the performance of the team at States, Coach Small replied, “The coaching staff was impressed with the demonstrated growth over the season that came to a head at the States Meets. The team had impressive time drops. The upperclassmen leadership coupled with the experience that the freshman and sophomores had at the meet, has the coaches very excited about the next couple of years.”
Posted by The Windham Eagle at 2:00 AM No comments:


Earlier this week the Windham Eagles touched off the second half of their season against the Poland Knights, a re-match with the team they faced in their season opener. Although the Eagles did not win the game they did play an improved game. But it did not start out that way. The game would begin with the Knights scoring the first 10 of the 12 total points in the first 5 minutes. But the Eagles soared back and kept the game close in the first half never trailing by no more than 10 points. 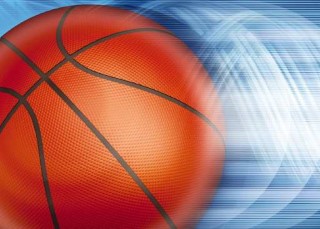 The slow start was no doubt due to having just returned from school vacation and an interrupted practice. As Co-coach Anne Blake would confirm, “We did practice but it is right after vacation and that practice was shortened by a fire alarm so it wasn’t the best.”  Blake also pointed out that the team, as a rule, is timid at the start. The Knights appeared a bit rusty as well but managed a 28-18 lead at half time.

The second half showed promise for the Eagles, always managing to keep pace with the Knights, but in the end could not overcome a consistent 10 point deficit. But nothing could erase the determination and joy on their faces with every effort. As with every game, Blake kept them going with encouragement despite the absence of Co-coach Brittany Taylor. “It’s a little challenging. I usually do the scoring books and Brittany is usually out there. But it’s all right. I know these guys pretty well by now,” shared Blake.

All of the Eagles players scored which was a plus when it comes to performance. High scorers were Cameron Malone with 8 and the rest of the team with four or more. The Knights had two players (Wing and Ellington) in double digits totaling 30 points.  In the end this would prove to be the deciding factor, in what ended up being a 48-30 victory over the Eagles.

With only three games remaining, the season is going to come to a close too soon. There is an outside chance that with this year’s success next year’s season could be extended, although nothing has been put in stone. One thing for certain, the players will certainly not object.