In his match against Sanford, Griffin Moreau had high intensity right out of the gate. He was working hard to pin his opponent and he succeeded.

If a Windham athlete lost or struggled in a match, they did not let it get them down. Their struggle only made them come out with more ferocity the next time.

This was apparent when Jack Elston battled it out against his Kennebunk opponent for several rounds and then multiple overtime rounds. His tenacity was evident and he was truly giving it his all. In the end, he lost by only one point.

At the end of the meet, Windham was victorious over Sanford, 27-9, but lost to Kennebunk 52-21.
Coach Nick Buckley commented on how the team did during this meet and overall during their season.

“The team wrestled hard today; they gave it everything they had, showed a lot of spirit and never gave up. I thought they met their goal of the season to everyday get better and better and better. I’m super proud of this group of kids; they’re fine young people and becoming [stronger] wrestlers.”

Congratulations to the team on a great season!
Posted by The Windham Eagle at 7:33 AM No comments: 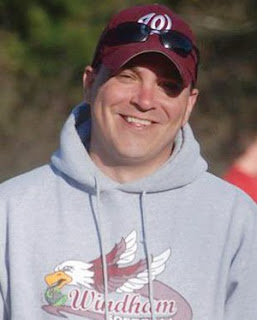 Windham High’s softball coach Travis Demmons started coaching little league softball in 2009 at Windham High School, but has been coaching students and/or employees going back to his days in the Navy of approximately 20 years ago. He has loved and has been hooked on coaching ever since.

After graduating from Bangor High School in 1994, Demmons entered the Navy, earning his
bachelor’s degree in accounting and a master’s in business administration while serving his country.

He discovered that coaching was very rewarding, both on the field and in the office, as a Team Lead/Contracting Officer where trains and coaches many interns and new employees. He saw the impact coaches had on their student athletes and Demmons wanted to have the same type of impact.

Demmons began coaching softball at Windham Middle School in 2012 for two years before moving to coach at Windham High in 2014. Along the way, he was on the Windham Little League Board for five years and became Board President in 2015. He left the board in 2016.

He loves working with his team, whether it’s at a youth clinic, at a practice or at a game. Working with them gets him energized. “A successful season requires hard work, commitment and everyone working towards the same goal,” stated Demmons. “Whether you win two games or sixteen, if everyone commits, works hard and plays as a team, then that’s a successful season.” Demmons would like each player to improve in one area. He’d like to continue their reputation as being good sportsmanship contenders and do as well as they can this season.

“I want my players to control what they can - mainly their attitude and effort,” reiterates Demmons. “If they focus on the controllable things, and let the uncontrollable stuff take care of itself; they’ll go far in life and on the field,” he explained.

He’d also like his team to learn to live life with no regrets by working hard, playing hard, having fun and making the most of the skills an individual has. 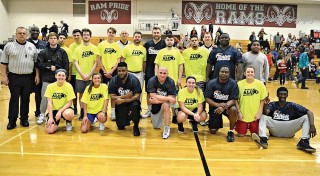 It was a night for fun and basketball on Friday, March 3 when student athletes from Windham, Westbrook and Gorham played against former Patriots players at Gorham High School to benefit the Windham/Westbrook/Gorham Triad.

This was a game less about competition and more about fun. At the half, the score was 43-35, Patriots. During half-time the All-Stars and Patriots signed autographs. The All-Stars were keeping in good pace with the Patriots when at the buzzer Windham senior, Nate Watson, sank a three pointer to make the final score 74-85, Patriots.

Windham senior, Narazi Henderson enjoyed playing in the game. “It was just a really fun experience,” Henderson stated. “It was fun to get to play with other kids you always played against. It was cool to play against Patriots players; it was a cool charity event.”

Windham juniors Tara Flanders and Meghan Hoffses had fun, too. “It was exciting to get to do something different with the boys’ team and to be able to play with people from different towns -we normally play in regular season games. It was fun.”

"The fundraising goal of the Gorham/Windham/Westbrook Triad was $10,000 and as of Friday, March 16th," stated Sargent Ted Hatch of the Gorham Police Department. That goal has been met.

All the money raised goes to five community organizations serving, but not exclusive to Gorham, Windham and Westbrook.
While many of these programs may be based in Gorham, there are no limits to any community in Cumberland County who may require one of these services.

Posted by The Windham Eagle at 7:24 AM No comments: