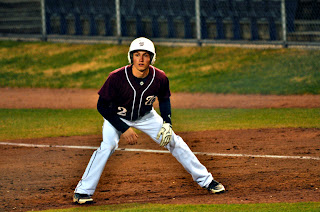 PORTLAND-The Windham Eagles and the Portland Bulldogs battled it out at Hadlock Stadium last Thursday night.  Windham emerged the victors in a tight 2-0 contest.  Windham was led by senior pitcher Nate Boyle with nine strikeouts.

In the first, it looked like it would be a rough night for Boyle.  He loaded the bases and got Chip Webber to ground out a fielder’s choice to end the inning.  Boyle reached base in the second on an error, but to no avail.  After the sprint, Boyle retired the next three Portland batters to give the Eagles their third at bat.
In the third, sophomore Tanner Laberge started things off with a single.  Laberge then stole second base.  Leadoff batter Zach Conley struck out.  Laberge kept his feet going and managed to get to third on a wild pitch.  Laberge found home plate and gave the Eagles the winning run on a passed ball. 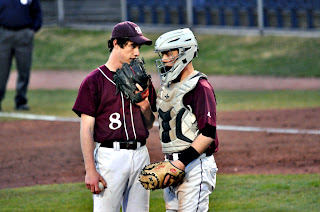 In the seventh, both teams had begun chanting and chirping and the crowd had gotten involved, too.  Windham, with the narrow 1-0 lead came to bat.  Shawn Francoeur drew a walk and coach Brody Artes put in Jake Mello as a pinch runner.  Nate Boyle took matters into his own hands and hit a single to put Mello on second base.  Mello and Boyle executed a double steal that was worth money to watch.  With runners in scoring position, Tanner Laberge hit a single to knock Mello in for the insurance run.
Portland wasn’t ready to give up though.  In the bottom frame, the Bulldogs’ Chip Webber hit a leadoff single.  Webber stole second to put himself in scoring position.  With one out, Travis Godbout drew a walk to put the tying run on base.  Nate Boyle struck out Mike Scala to earn the second out of the inning, but Portland took advantage of a defensive lapse and both runners advanced.  So, with runners on second and third, Boyle bore down and struck out Portland’s leadoff batter to end the game in dramatic fashion.
Posted by Niels Mank at 10:30 AM