Windham hosted both girls and boys junior varsity and varsity basketball games Friday night against the Gorham Rams.  Having a lot of the community in attendance was the perfect opportunity to say 'thank you' to both Superintendent Sandy Prince and Police Chief Richard Lewsen for the recent school events that closed all eight schools in the Windham-Raymond School district. 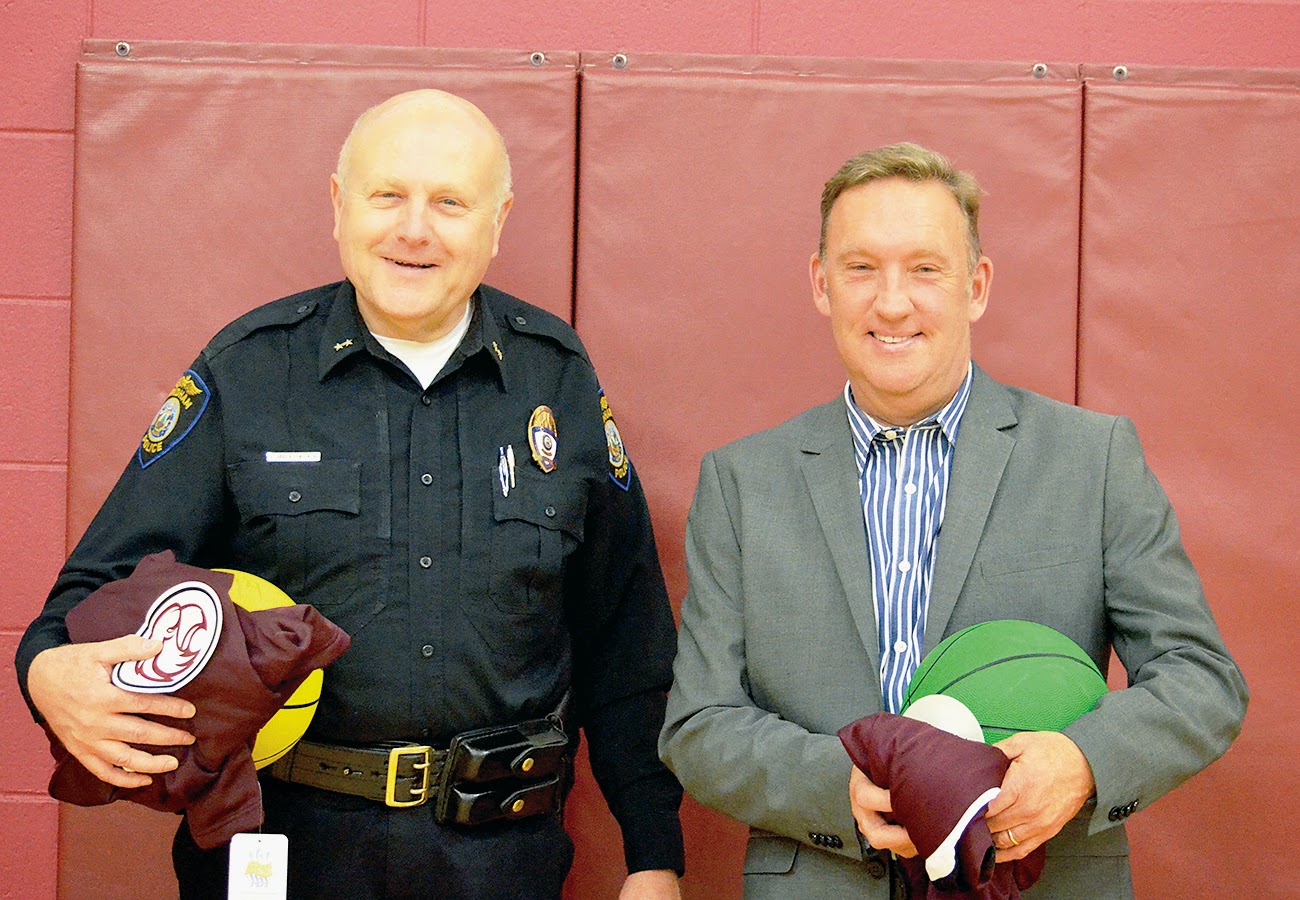 Bob the Screen Printer made up t-shirts for the kids to wear that night to represent their 'thanks' to both Chief Lewsen and Superintendent Prince for making the decisions that they did to keep the students safe.
Between the girls varsity game and the boys varsity game Pat Moody, president of the Windham Youth Basketball Association had a few words to say, then Windham's own Bob Witham spoke to the gym packed full of students, parents and teachers as it was expressed through words how thankful the town is on how the events were handled during a tough situation.  Kids then presented both gentlemen with a signed basketball from the youth players and a Windham pull over from the older players.

Posted by Michelle Libby at 2:28 PM No comments: 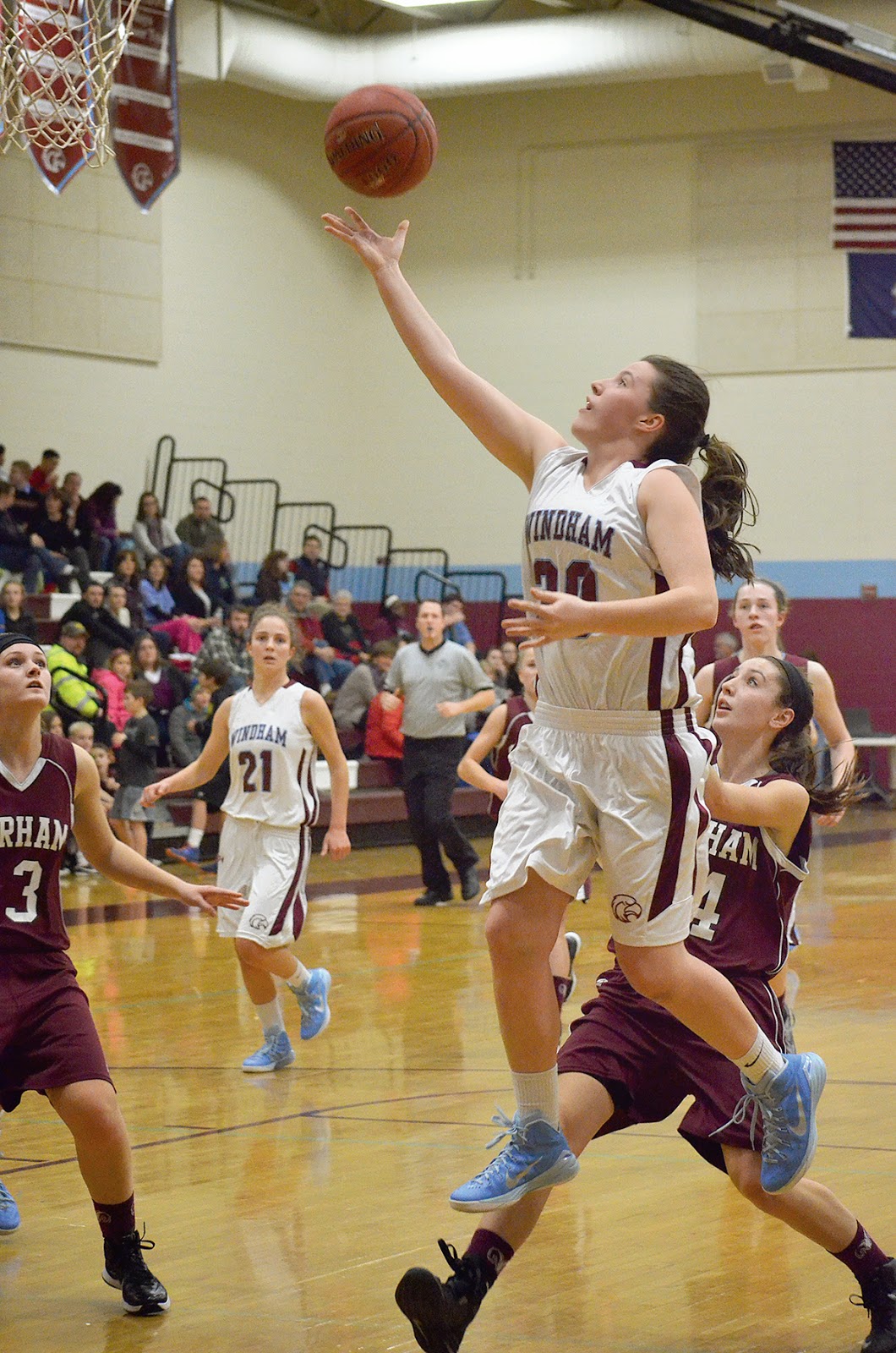 Friday night the Eagles hosted the Rams in quad games that showcased the junior varsity girls and boys teams.

The varsity Lady Eagles faced off against the Rams, giving the Rams an early lead that they would be unable to bounce back from. Gorham won the game 52 -28.

The varsity boys got off to a slow start getting into the game which resulted in a Ram's lead of 35-25 at halftime. Windham started to find their footing in the third quarter and kept the game within 8 points. However, the game came down to the fourth quarter and Gorham stepped up their game when it was needed. Gorham went to the foul line and made 14 of their 18 shots on basket putting the game out of reach in the last minute of play, which resulted in a loss for the Eagles 66-58.

“That was the difference in the game, they hit their layups and their free throws when they had to,” Millington said. “I’m really proud of how our guys just kept grinding back.”

330 Jackson Giampino goes up for a layup

362 Ryan Gorman takes the rebound from the Rams 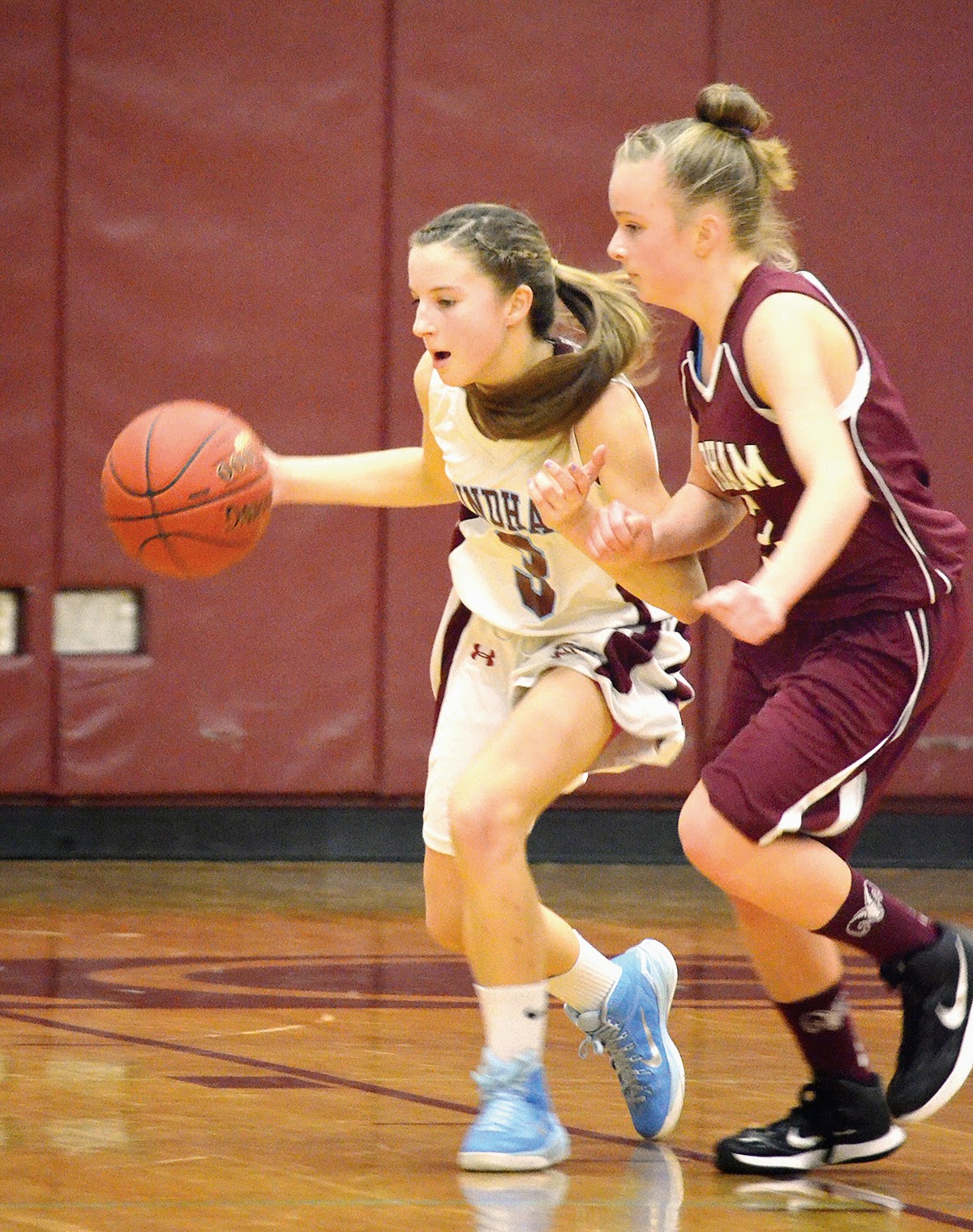 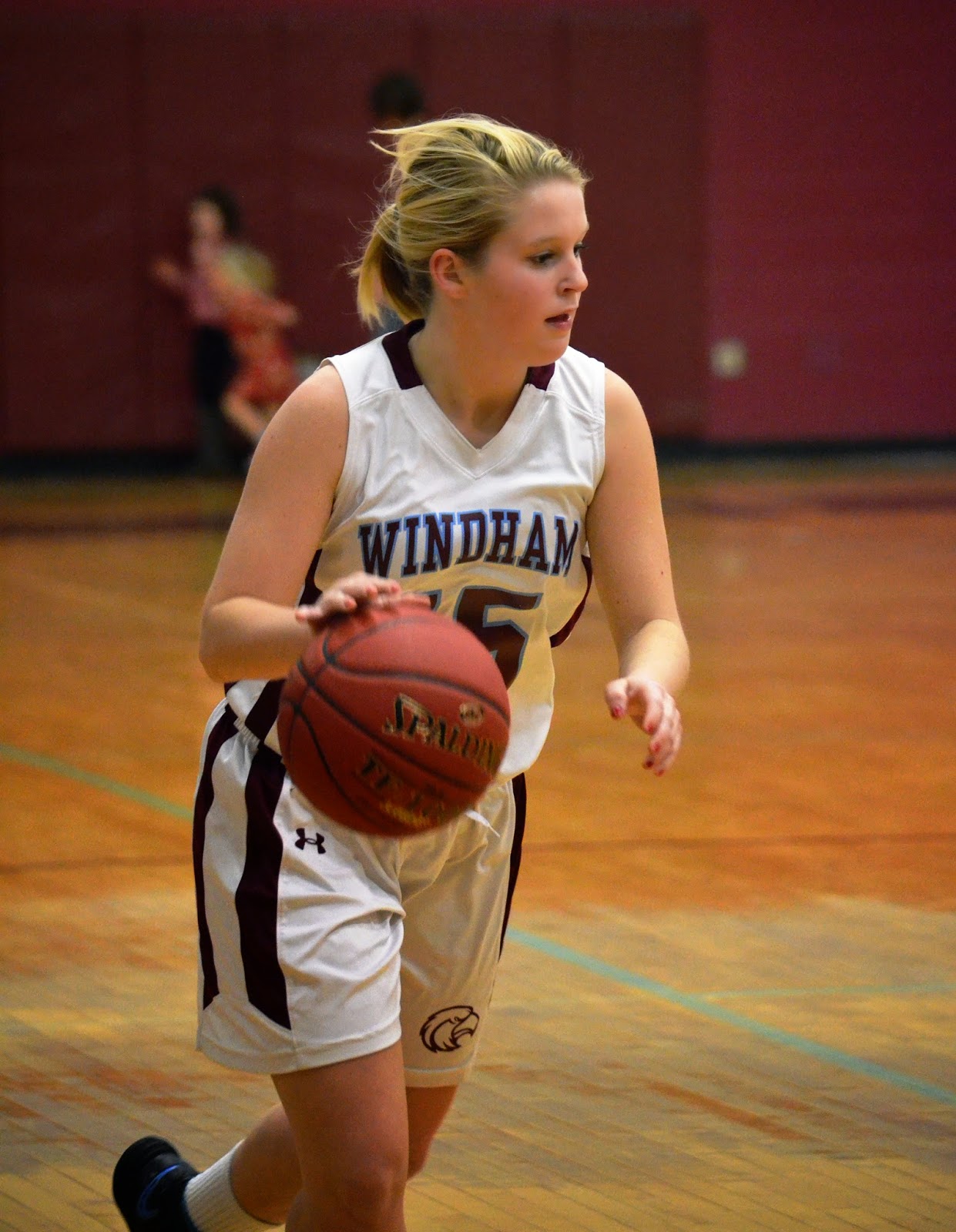 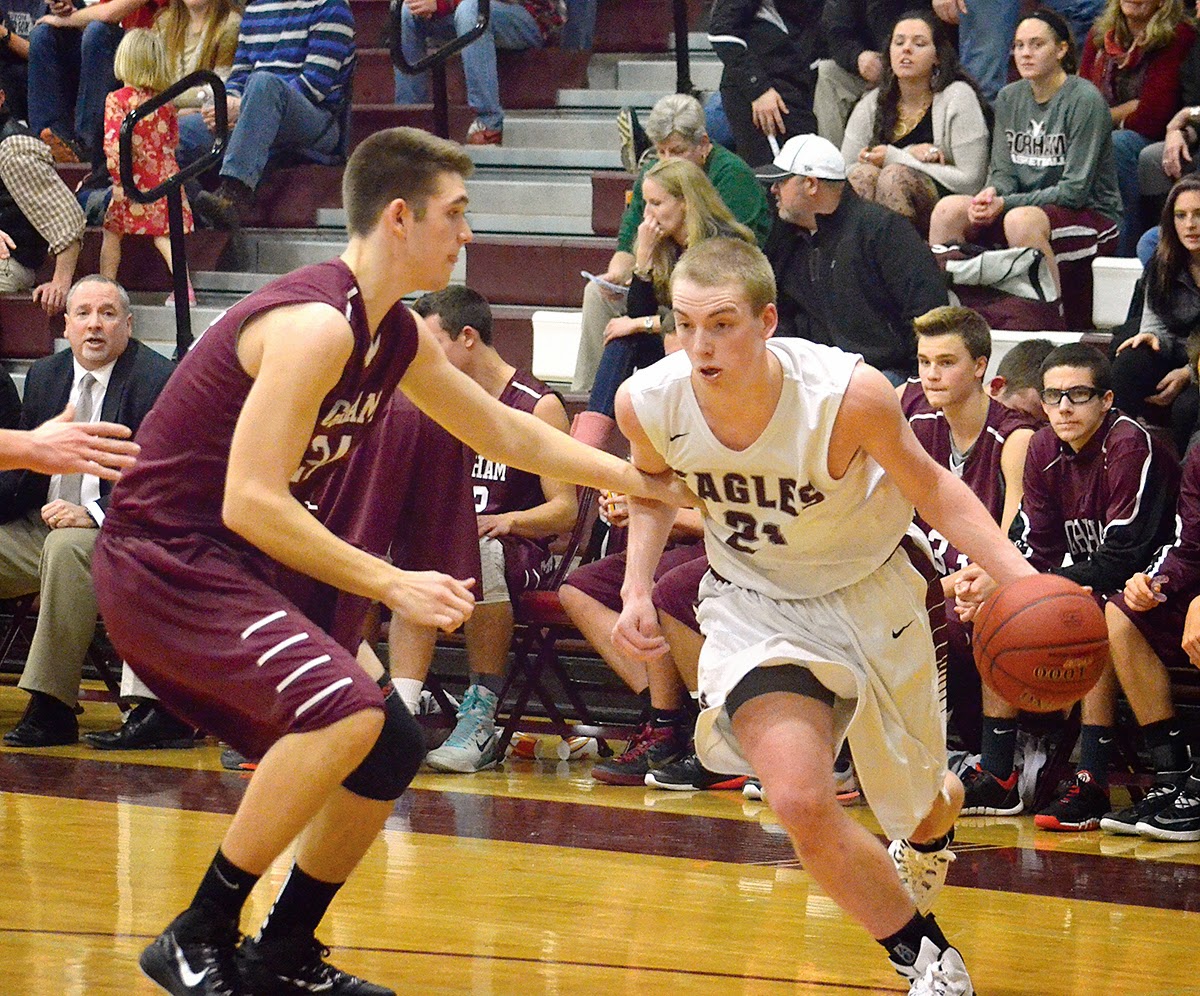 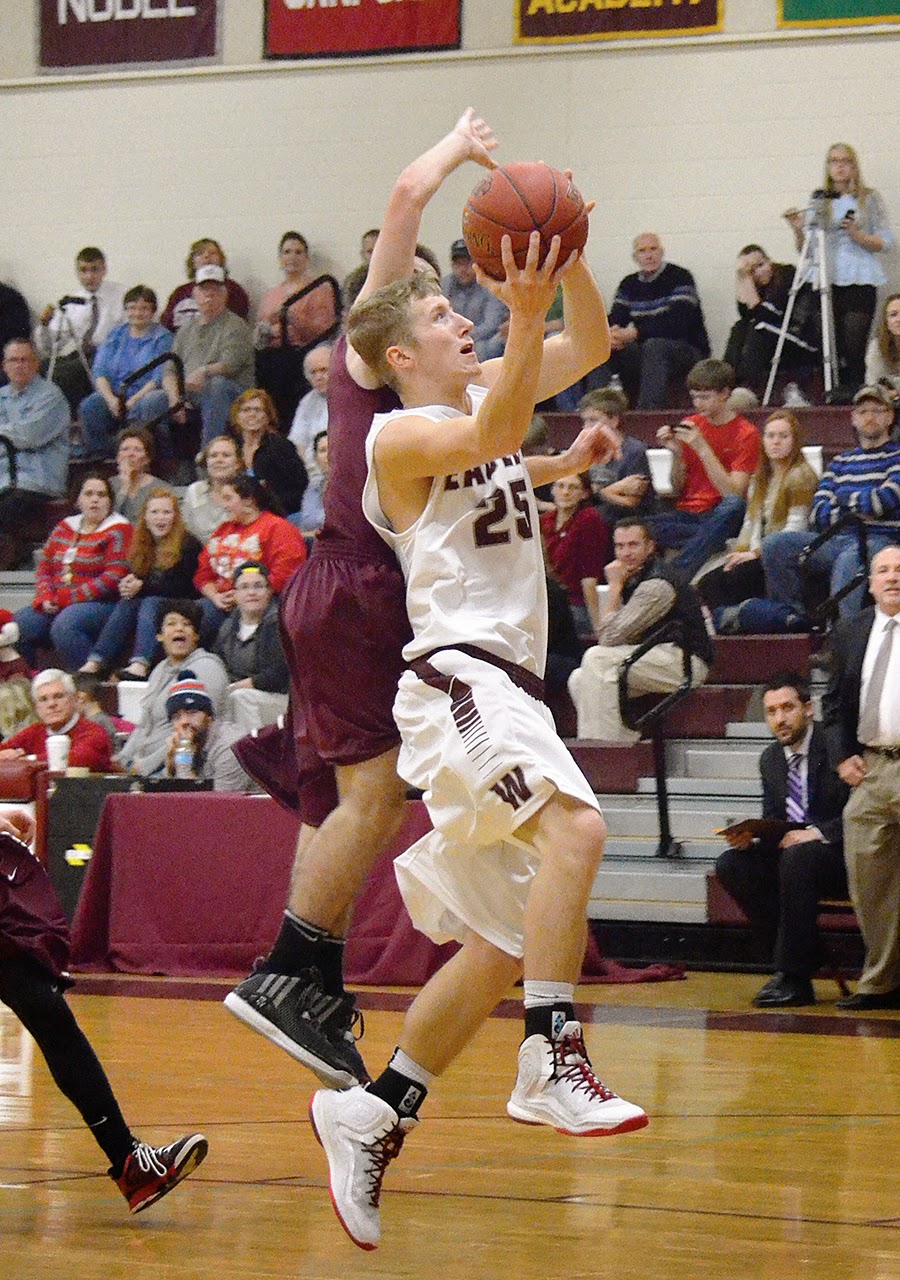 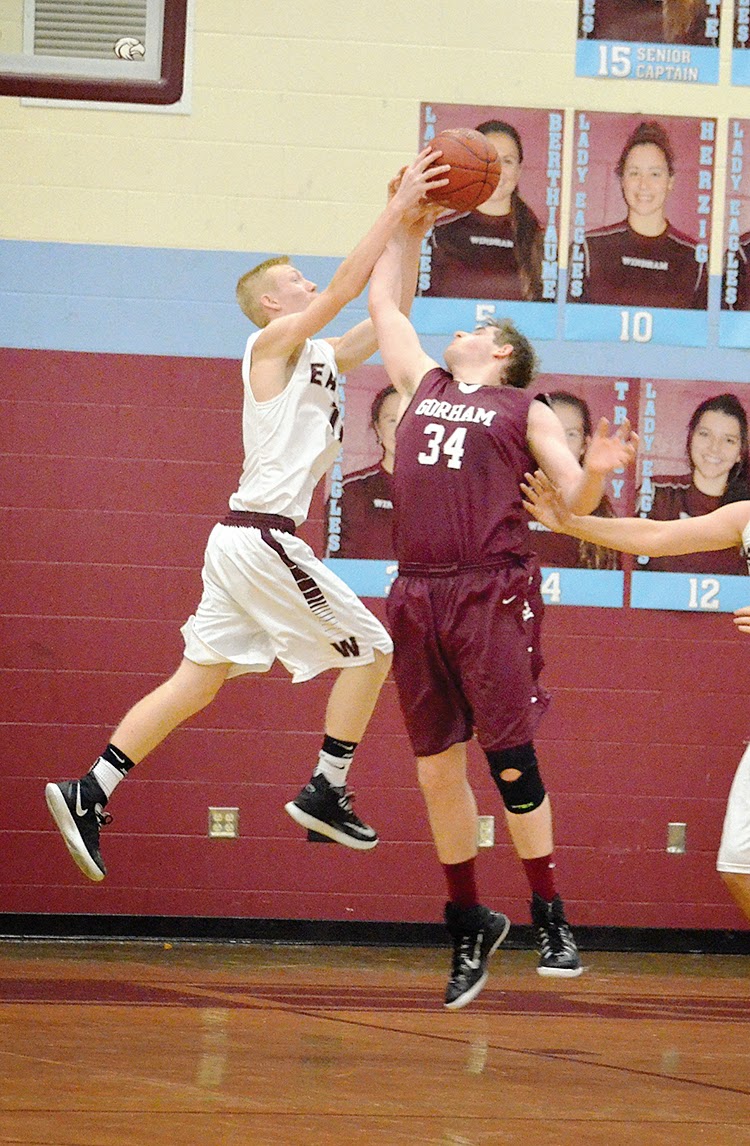 214 Mya Manette dribbles down court past the Rams defense

244Macy Manette drives to the basket

Posted by Michelle Libby at 2:27 PM No comments: 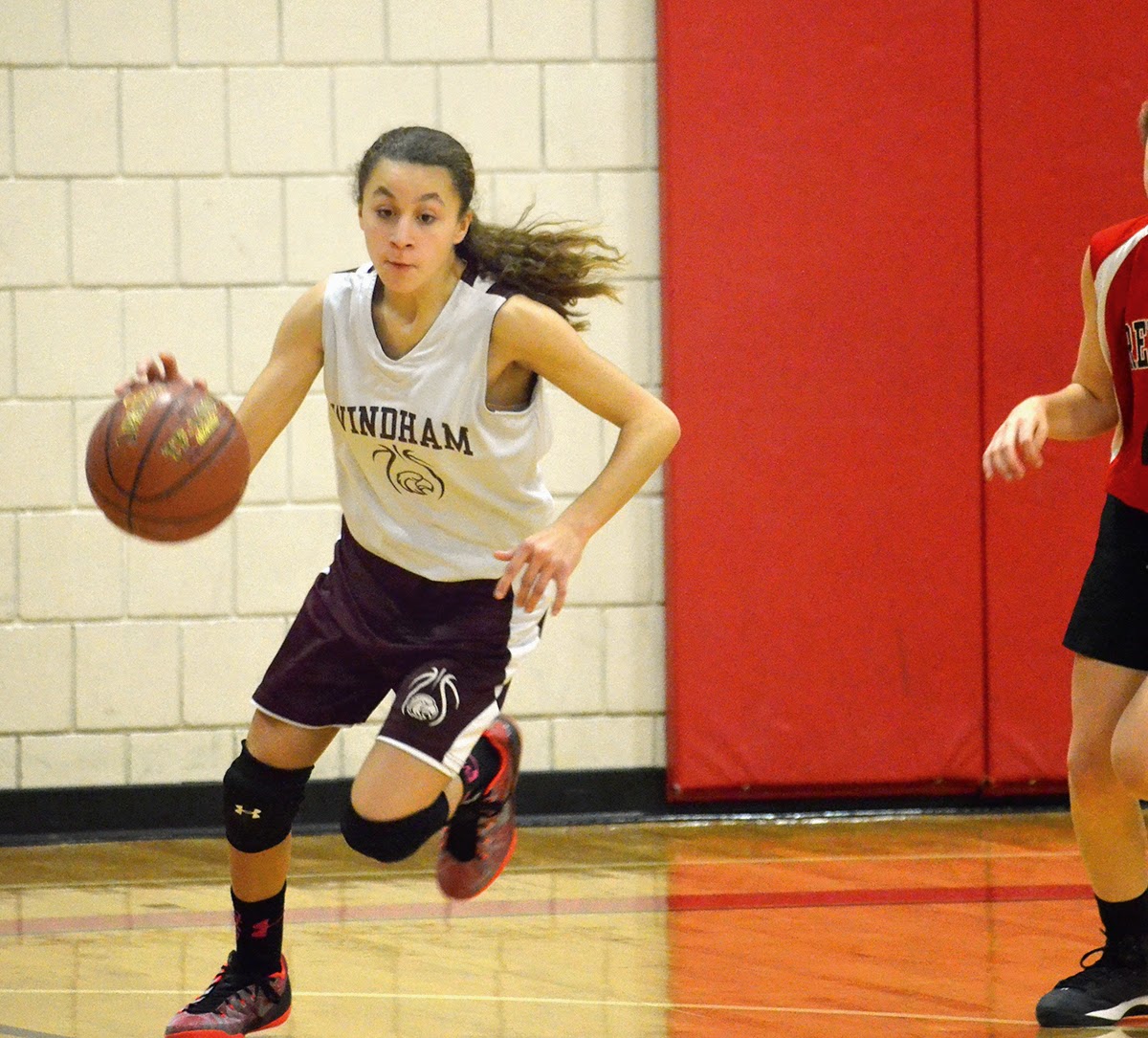 The sixth grade girls travel team consists of 10 girls who are friends on and off the court. More than half of the team is in their second season of playing travel basketball together and adding the other half has only made the team stronger.

Coaches Pat Moody and Dave Fielding are excited about the growth of these girls in their ball handling skills, foot work and team attitude has grown this season. This team will be facing some tough teams such as Scarborough and Gorham and the Little Lady Eagles are giving them a run for their money. These girls are making the other schools step up and give them a challenge. 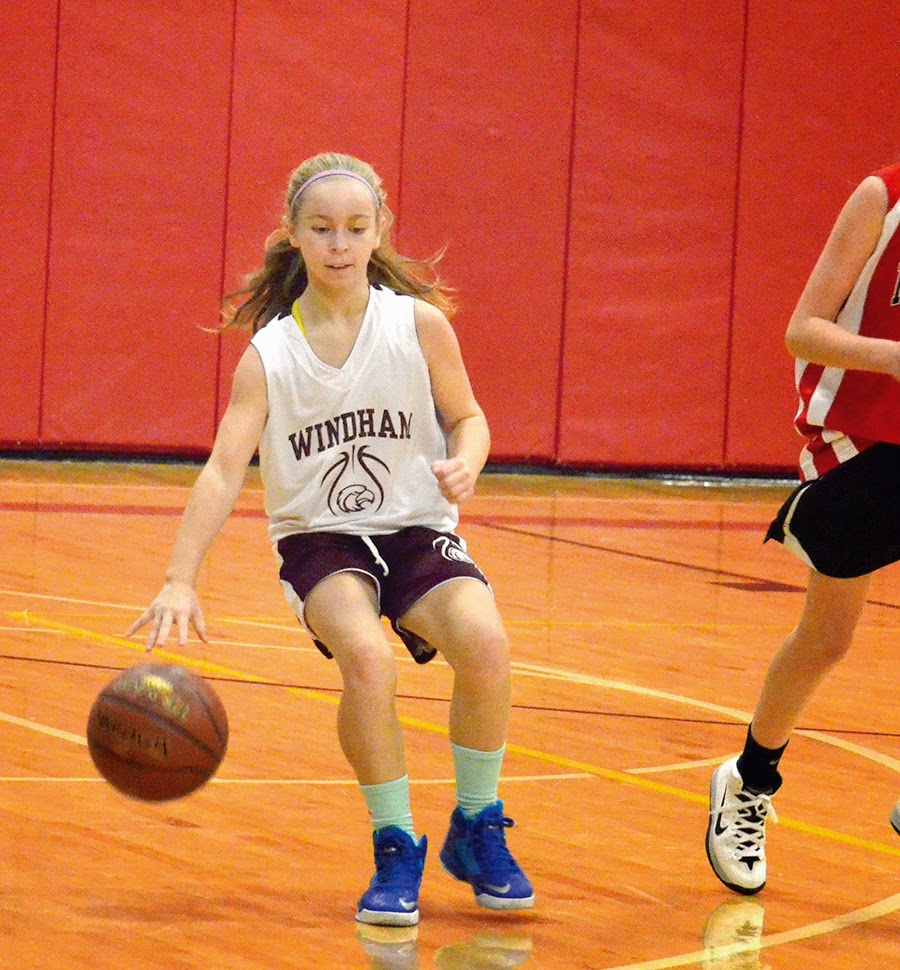 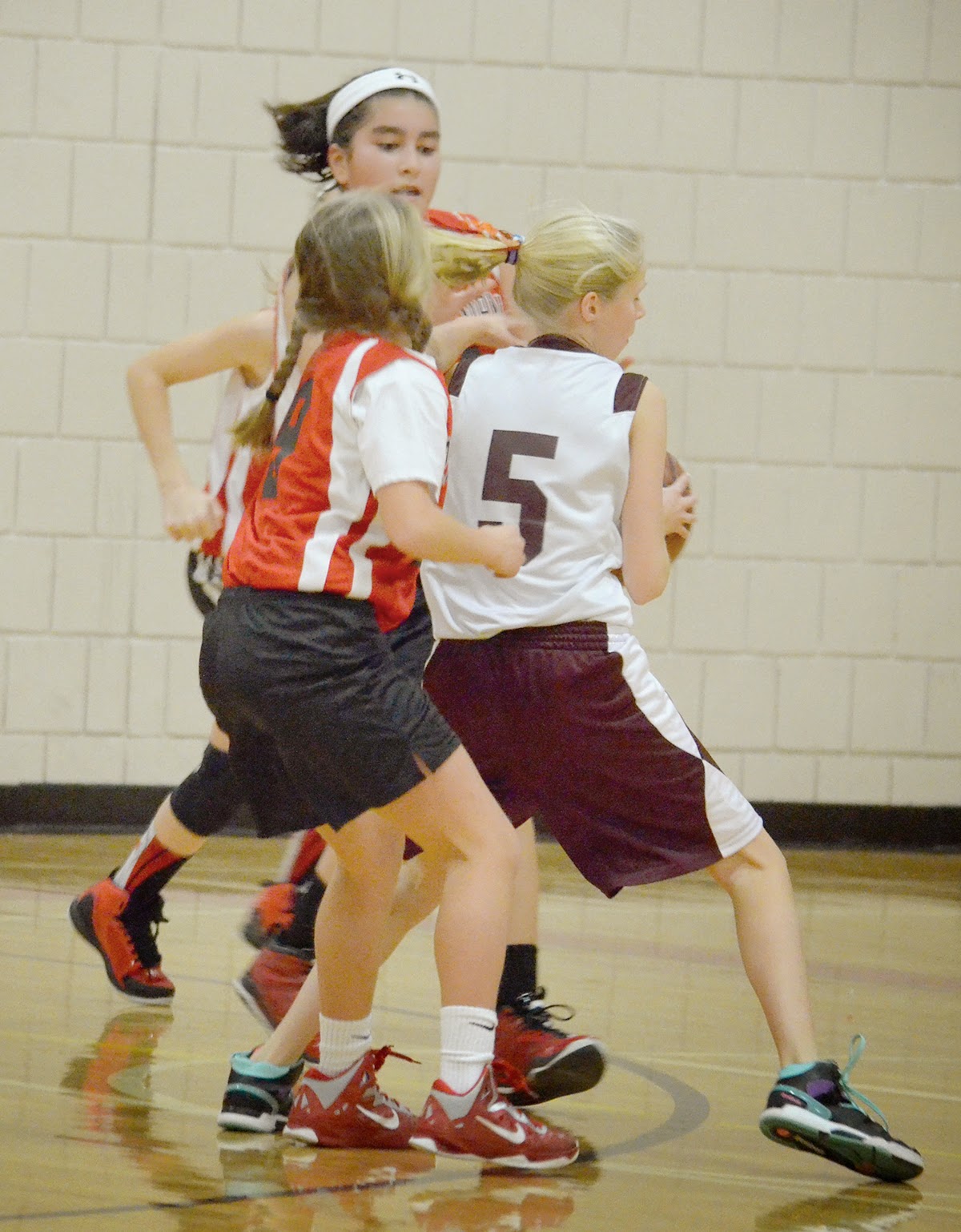 Posted by Michelle Libby at 2:22 PM No comments:


Ten-year-old Estella Inman is The Windham Eagle student of the week. The fifth grader attends Manchester School and is in Ms. Carle’s class. Her family consists of her parents, grandparents, and two dogs, Moxie and Lucy.

“Stella is a remarkable young lady.  From the moment she walks into school, to the moment leaves she puts 110 percent into everything she does.   She embodies all of our schools guiding principles.  She is kind, respectful and responsible.  Stella is a friend to everyone in our classroom and is always willing to work with other and to lend a hand.   Along with being a hard working student, Stella works equally as hard outside of school.  She is a talented and dedicated soccer, basketball and lacrosse player and is a model of good sportsmanship looks like.  Stella has been chosen as student of the week for Manchester School because of her character and drive to always do her best!” said Mrs. Carle.

Her favorite subject is reading and she believes education is important “so you can learn new things and get into a good college.” She has not decided on which college that might be at this time. She does want to be a soccer player when she grows up. She likes playing with her friends and learning interesting things.

Posted by Michelle Libby at 2:20 PM No comments: 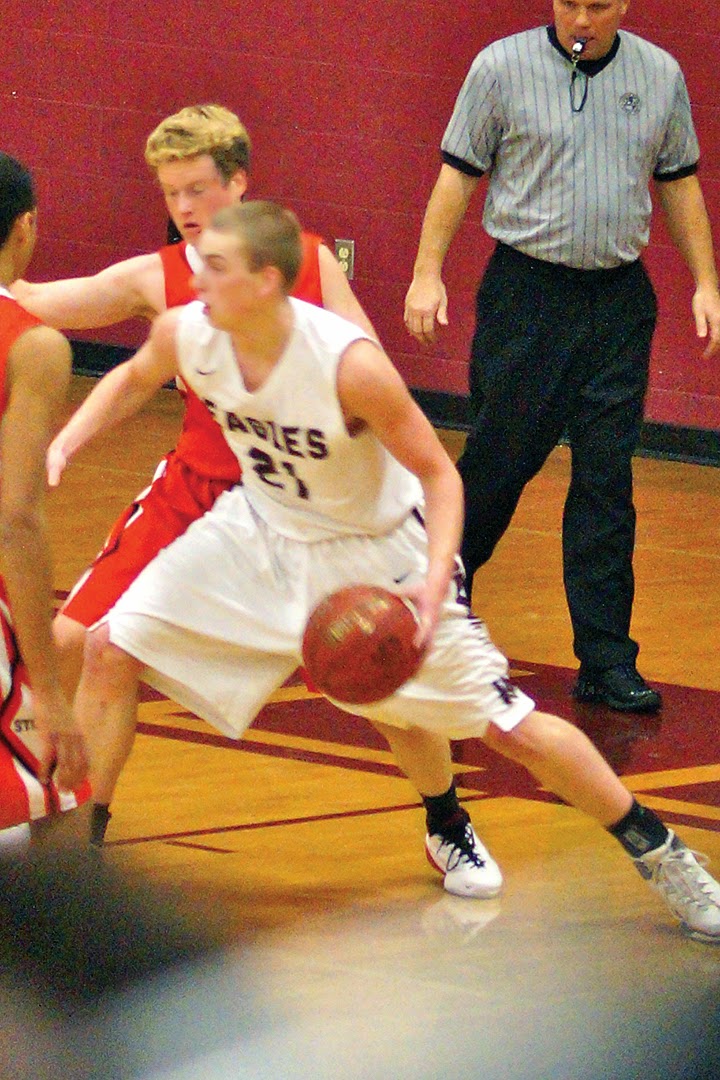 The Eagles hosted the Red Storms in boys basketball Friday night. The fans came out to support the Eagles in their first home game of the season. The Varsity team looks good this season. Expect to see some high scoring games and some big plays by the whole team.

Kevin Weisser scored 18 points and had 10 rebounds, while Marcus D’Andrea added 17 to the scoreboard. Scarborough’s points were led by Milani Hicks who scored 29 out of the teams 59 game points. 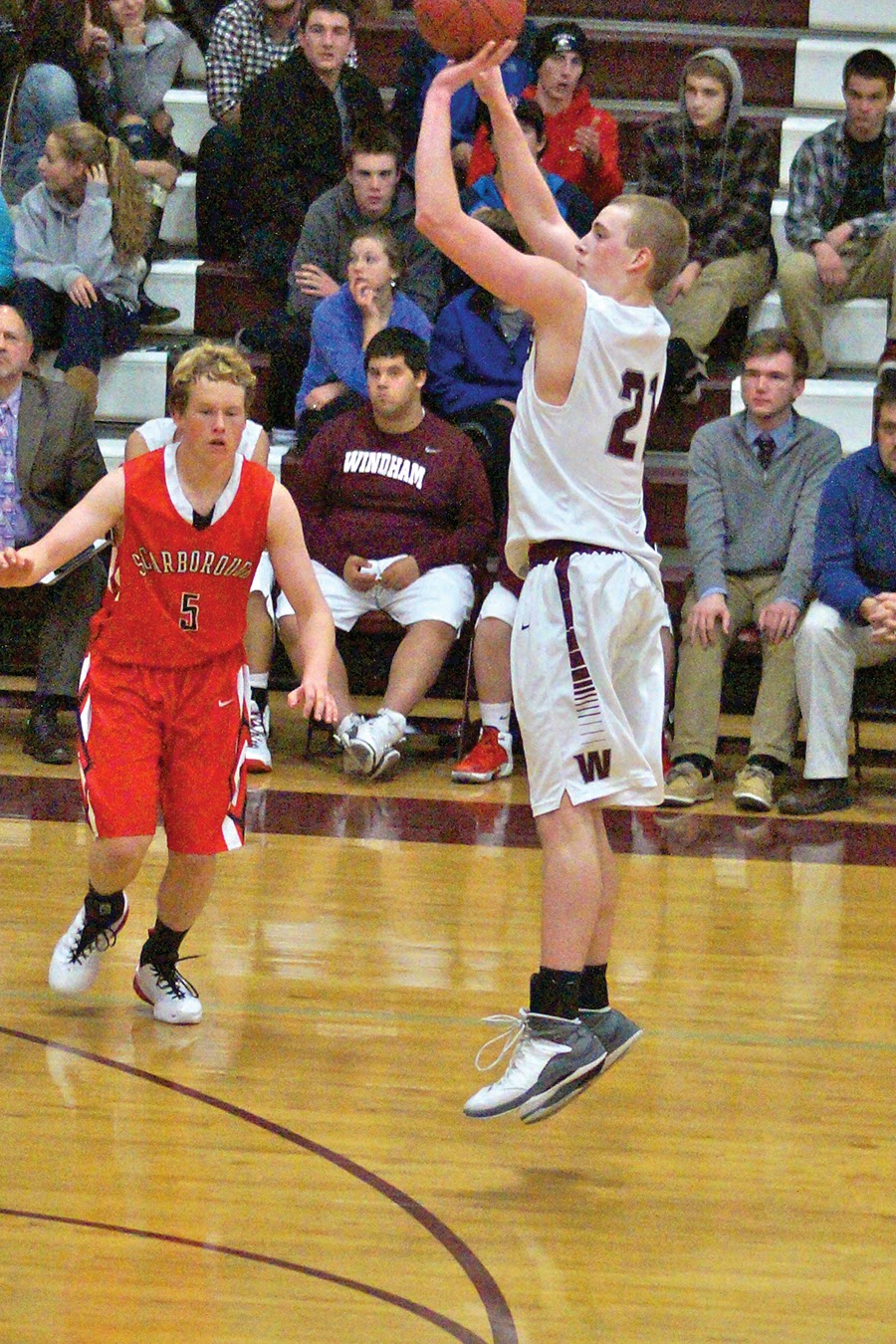 Windham started with a bang, taking the lead off the bat and staying ahead for the most part. Scarborough started a run but it wasn’t enough to catch up to the Eagles. Windham eventually took control of the game in the third quarter, outscoring the Red Storm 19-8 and winning the game 66-59. 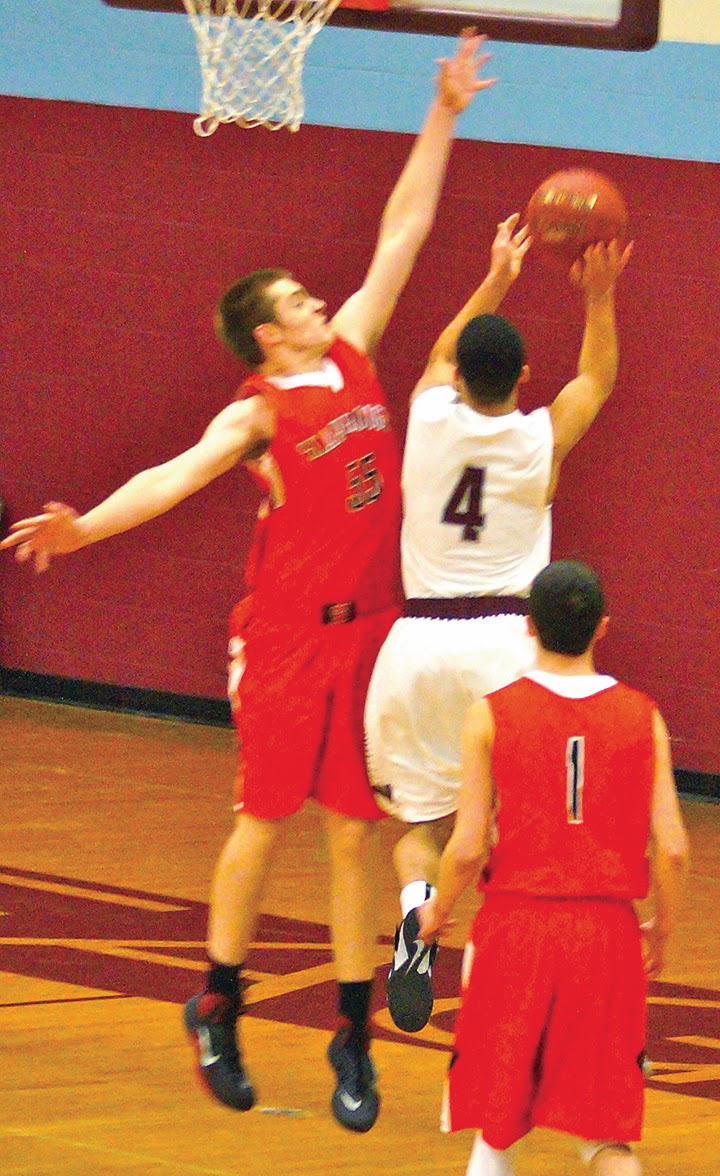 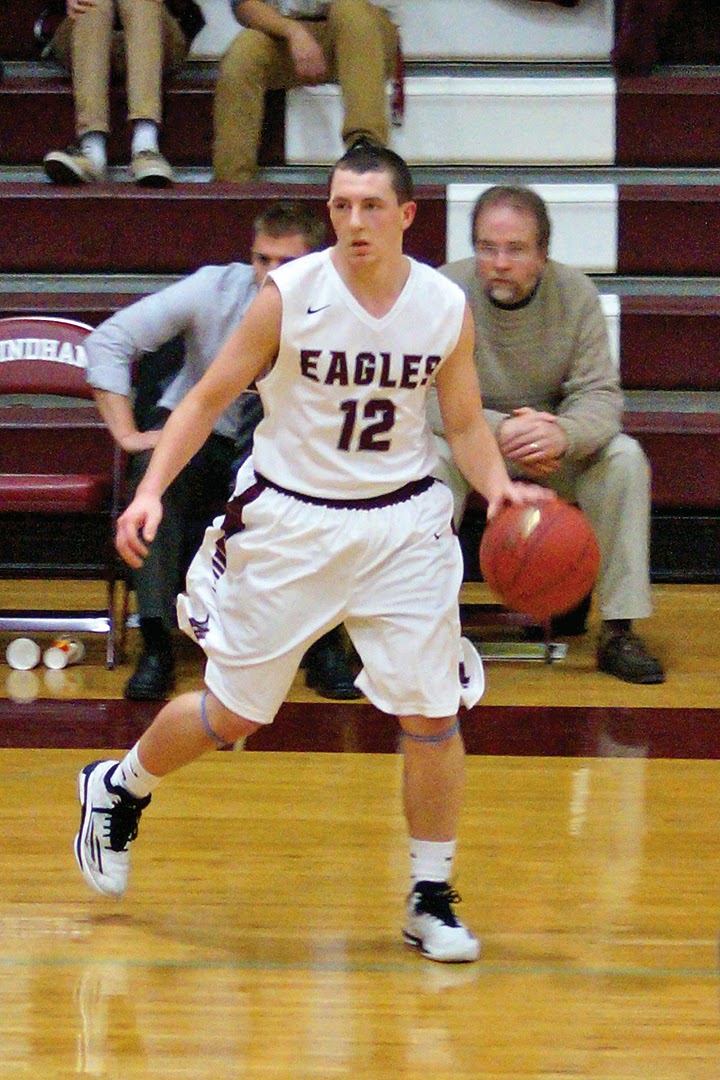 Posted by Michelle Libby at 12:51 PM No comments: