The undefeated Portland middle school football team came to Windham last Sunday and, thanks to some big plays, emerged with victories in the varsity and junior varsity games.

“We are a team that seems to be mired by one mistake that results in big plays,” said Windham head coach Tony Leslie.

In the varsity game, Windham received the opening kickoff, but couldn’t get started offensively and punted away the ball after three plays. The Eagles were playing without Ricky Brichetto, a starter on the offensive and defensive lines.

Portland appeared to score on a long touchdown run that was called back on a holding penalty, but on the next play, they drew first blood at 6:47 in the first quarter.

With Windham on the march, Portland intercepted a pass by Windham quarterback Blake Houser. A long run later and Portland was up 14-0.

When Windham’s Treva Valliere got a kickoff he could field, he made the best of it, running the ball down to the Portland 30. Valliere also had a great day kicking and punting the ball.

Houser’s favorite target, Garrett Peeples hurt his hand in the second quarter, but when he came back into the game, he hauled in a spectacular catch at the Portland 9-yard line. On the ensuing play, wide receiver Parker Varney laid out for an awesome Windham touchdown 20-6. Houser punched in the conversion to put the score 20-8.

“That was a shining moment for him,” Leslie said of Varney. “He made an all-star catch in the end zone.”
With Portland driving just before the half, Windham defensive back Michael Fahey intercepted a Portland pass to give Windham an opportunity to close the gap. The score at the half remained 20-6.
In the third quarter, Windham was playing Portland even, but another big play resulted in a Portland touchdown, putting the visitors up 26-8. Peeples crushed the attempt at a two-point conversion with a punishing tackle.

With Corbin Judy and George Butts filling in for Brichetto at nose tackle, Windham hung tough with its undefeated opponents. Windham got the ball and was moving, but a lost fumble late in the third quarter resulted in another Portland score. 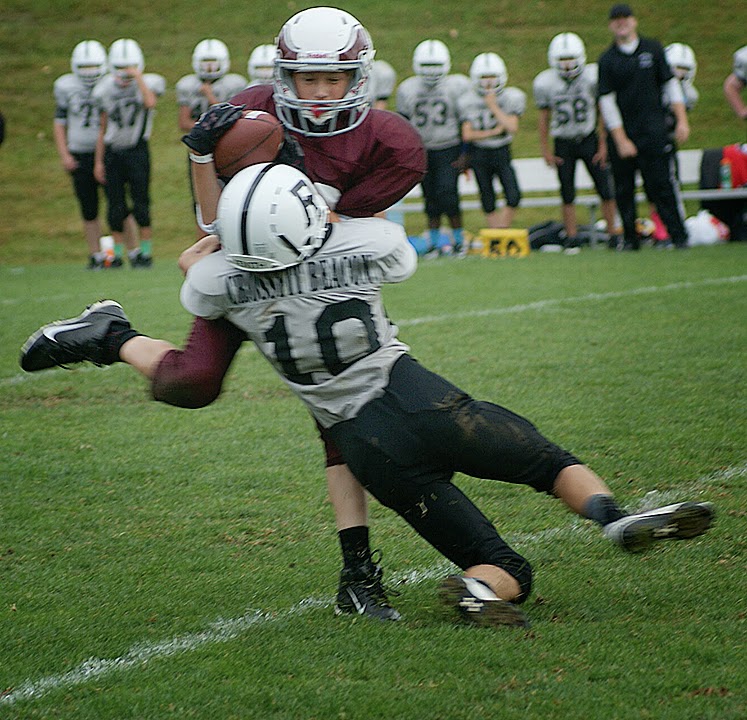 With the score 32-8, Houser found Peeples for a great catch at 5:32 in the fourth quarter and Houser ran over a Portland defender for the Eagles’ second touchdown. That was it for the scoring and Portland won 32-14.
In the junior varsity game, Portland won 22-0 with Windham having a tough time battling the visitor’s line on each side of the ball. Injuries to Mattingly Babb and Judy also had an affect on the game.
Ever the optimist, Leslie said, “If we face Portland again, get everybody healthy and get everybody working as a team at all times, it will make a difference.” This coming Saturday, September 27, the middle school teams play Massabesic at the high school stadium with the JV game starting at 6 p.m. and the varsity game to follow.

Fahey-Int.
Michael Fahey intercepted a Portland pass before the end of the first half. Photo by Eric Colby. 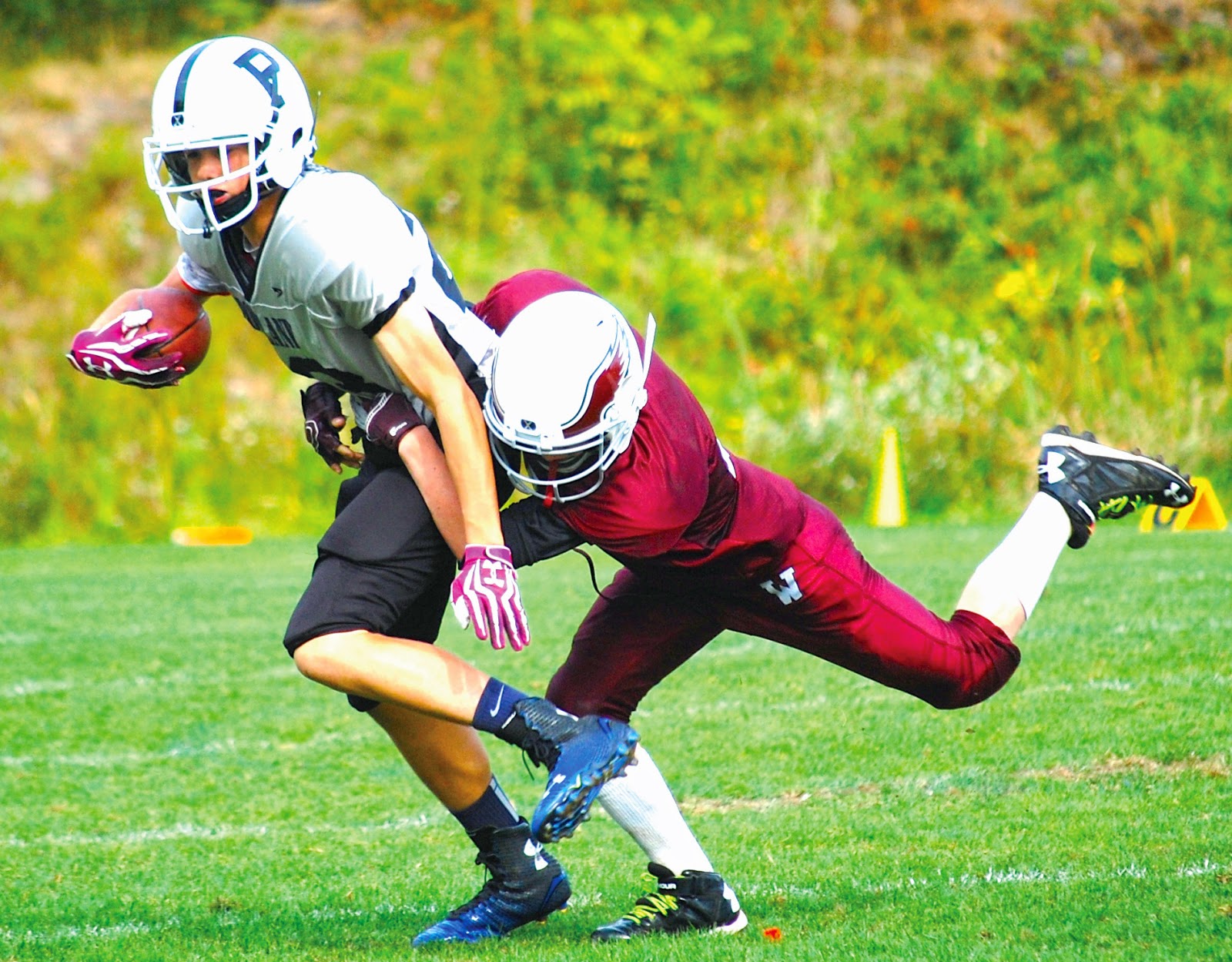 Posted by Michelle Libby at 9:45 PM No comments:


Winds were strong across the field in Lewiston Monday; however, they had no effect on the outcome of the J.V. game that was played.  The Eagles came to play and that’s what they did. 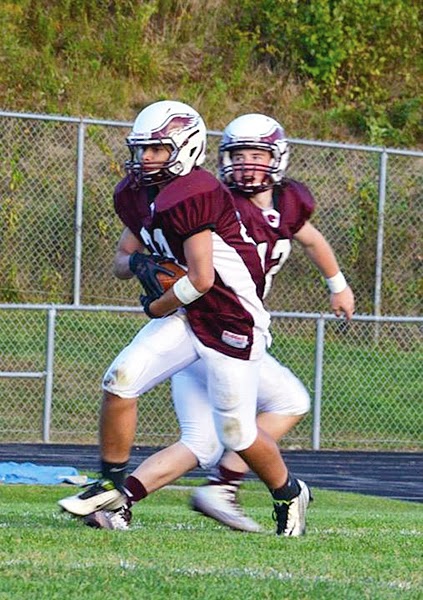 Sophomore Cameron Hoffses ran the ball down the field for two consecutive touchdowns.  The Lewiston defense was no challenge for Hoffses who skirted around and sometime through the line.  Quarterback Tanner Bernier had no issues passing the ball to Hunter Coffin who ran in a touchdown for the Eagles. Nate Watson plowed through several lines of defense to move the ball down field.
Nazari Henderson stepped in during the second half and took over as quarterback and the Eagles stopped the Blue Devils from not only scoring but even seeing their side of the field.  The Eagles dominated this game with the results being 35-0.
Next J.V. game is Monday September 29 at 4 p.m. against Cheverus at home.

Posted by Michelle Libby at 9:39 PM No comments:

Athlete of the week - Ethan Spaulding


The Windham Eagle athlete of the week is Windham resident Ethan Spaulding. The 15-year-old is a sophomore at Greater Portland Christian School. Ethan is a forward on the Western Maine class D soccer team. He also plays basketball and baseball. 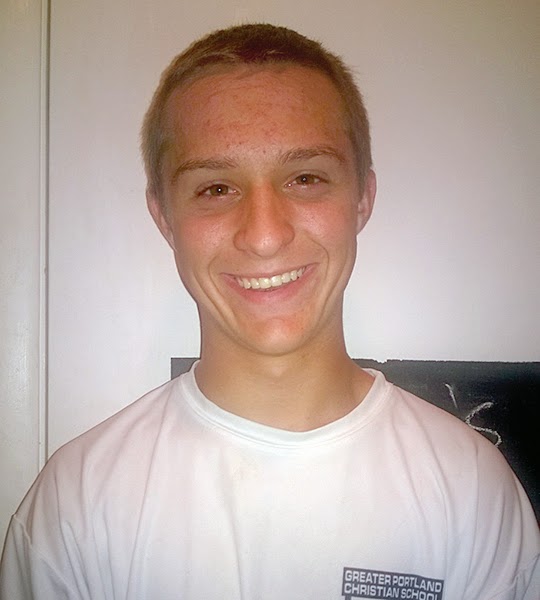 Ethan was nominated by the GPCSs athletic director, Chris Spaulding, Ethan’s father and coach. He had a stellar week of soccer helping his team by scoring a goal to push the team over Vinalhaven on Monday. On Wednesday he scored two goals in the first three minutes to help defeat Temple Academy 4-0 and then on Friday, he scored four goals to top Vinalhaven 5-1.

Ethan is the son of Lorrie and Chris and has three sisters, Courtney, Emma and Casey.

“He has nine goals in six games and has scored in each of the last five despite missing significant playing time due to illness and the injury last Wednesday,” said his coach, Chris.

His most important thing on the field is “making his teammates better, working as hard as possible. Making sure we play a team game and not going for personal glory. Representing Christ,” said Ethan.
Ethan plans on going to college and has been working hard academically this year.

Best way to unwind: A very large supper, lie down and stretch.

Posted by Michelle Libby at 9:35 PM No comments:


Friday’s chilly night brought out the Eagle fans to cheer on another win for the varsity football team. 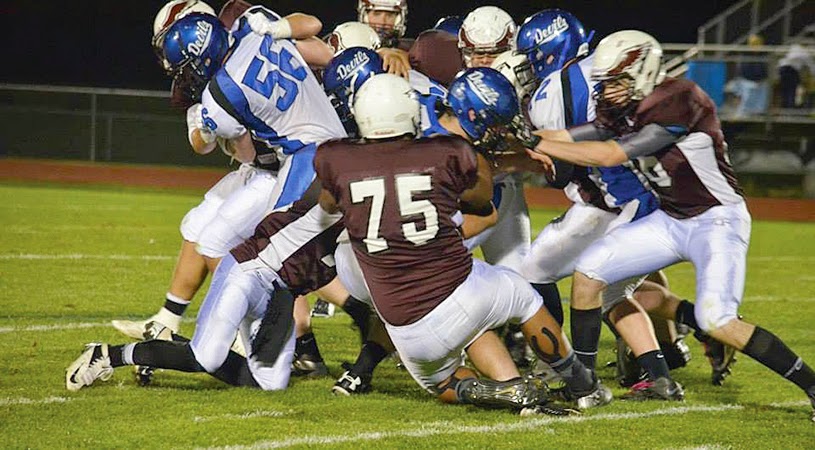 There was a lot of excitement on the field during the first quarter. Josh Dugas put Windham on the board first with a 3-point field goal. Dylan Koza made some great runs down field and Webb ran with a 63-yard punt return. The quarter ended with Laberge passing to Matt Roy in the end zone.

Matt Roy started the second quarter with a 21-yard run ending in a touchdown. Dylan Koza ran in a touchdown and Dugas’ kicks were good both times. Down on the sidelines the team was pumped. On the field, the players were aggressive and the game was fast paced. The Lewiston Blue Devils were starting to get a little too aggressive and all the Referee’s threw in their flags when a Lewiston player kicked Zach Davis in the helmet on a down. The Blue Devil player was ejected from the game. 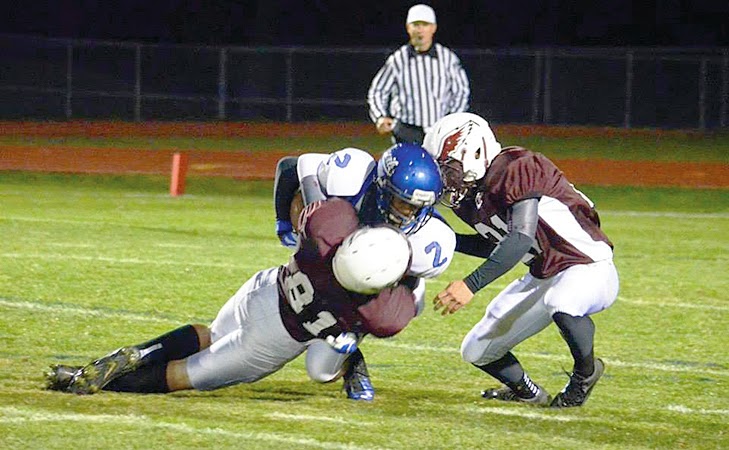 Third quarter brought a great play by Tanner Laberge who made in interception on our end of the field resulting in a touchdown. Cameron Hoffses and Travis Pesce made additional touchdowns ending the game with Windham 61 and Lewiston 22.
Next game is at Cheverus on Saturday, September 27 at 12:30 p.m.

Posted by Michelle Libby at 9:32 PM No comments: 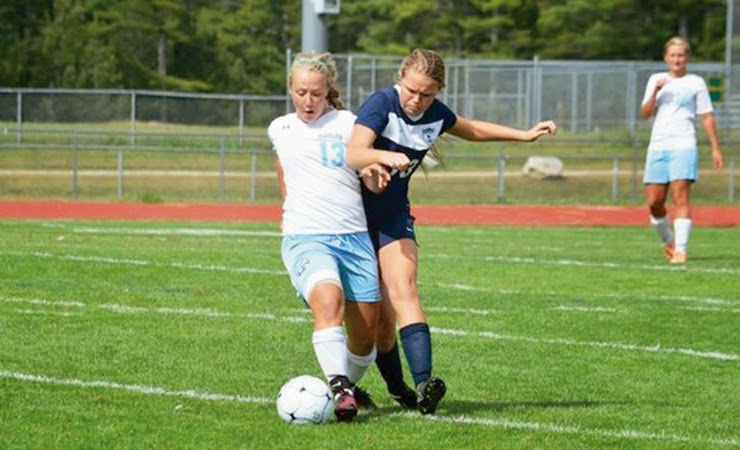 Ending the 2013 season with a 17-1 record and with a Class A Championship Title under your belt, you would think the Lady Eagles would be nervous to try and achieve such a goal again.    Not these girls!  They are ready to make 2014 the beginning of a trend to be carried on.

The Eagles have returning an excess of talent that is led by All-Stators Cassie Symonds and Jenna Soucy.  The team also has All-Western A defender Jordan Sargent, and key players; Alana Dube, Melissa Morton, Elizabeth Mycock, Hannah Haskell, Ciera Berthiaume and Katie Herzig   and Shannon Valente. 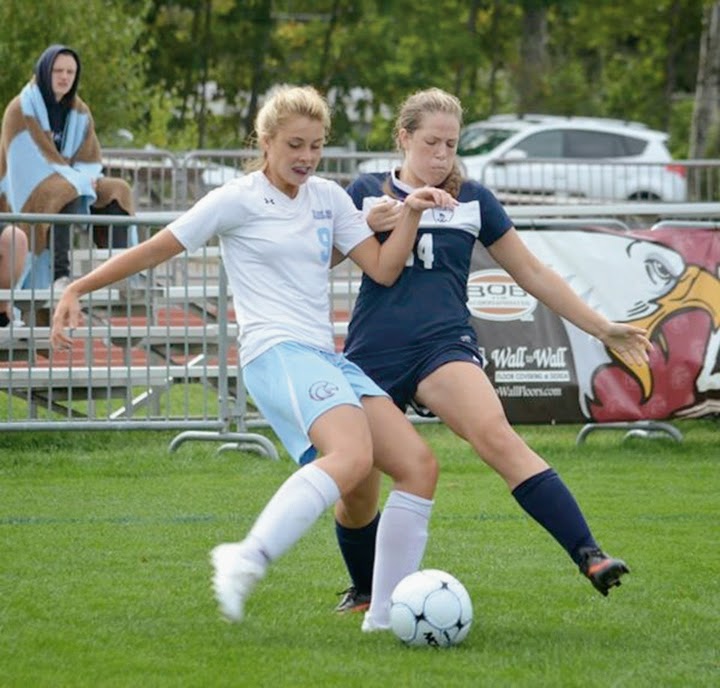 Senior Melissa Morton who is back this year injury free showed her skill by scoring three goals to lead the Lady Eagles over the Blue Blazes.  Jenna Soucy added two goals and an assist, while Katie Herzig and Maggie Symonds each had a goal and an assist.  Goalie Lizzy Mycock  was lonely down at the Windham end of the field , not having to make any saves as the Lady Eagles held a 32-0 shot over the Blue Blazes.
The season looks good for 2014 and the community can’t wait to follow them as they soar. 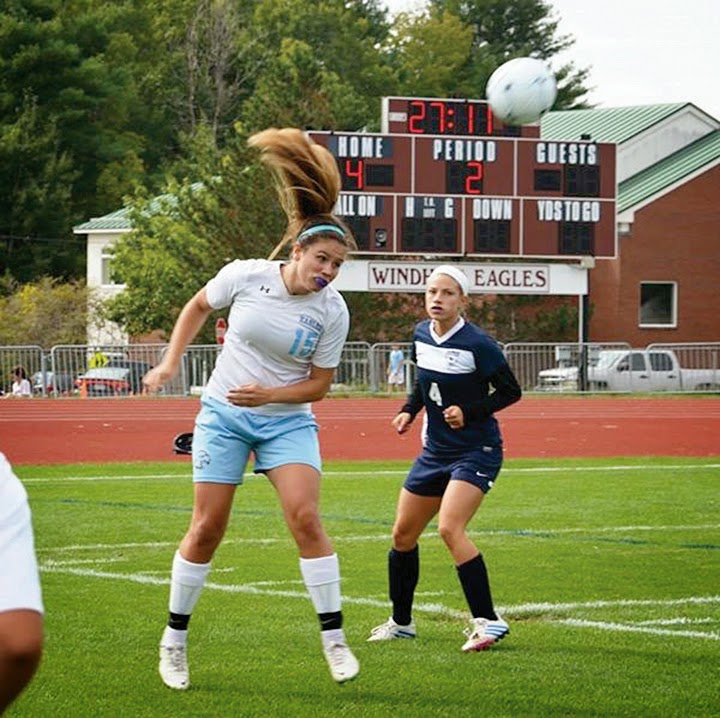 Posted by Michelle Libby at 12:04 PM No comments: