Saturday was the last day of the season for the Windham varsity football team. They faced off at Fitzpatrick Stadium against the Trojans of Thornton Academy. The abundance of fans that came out to support the boys was outstanding to witness. 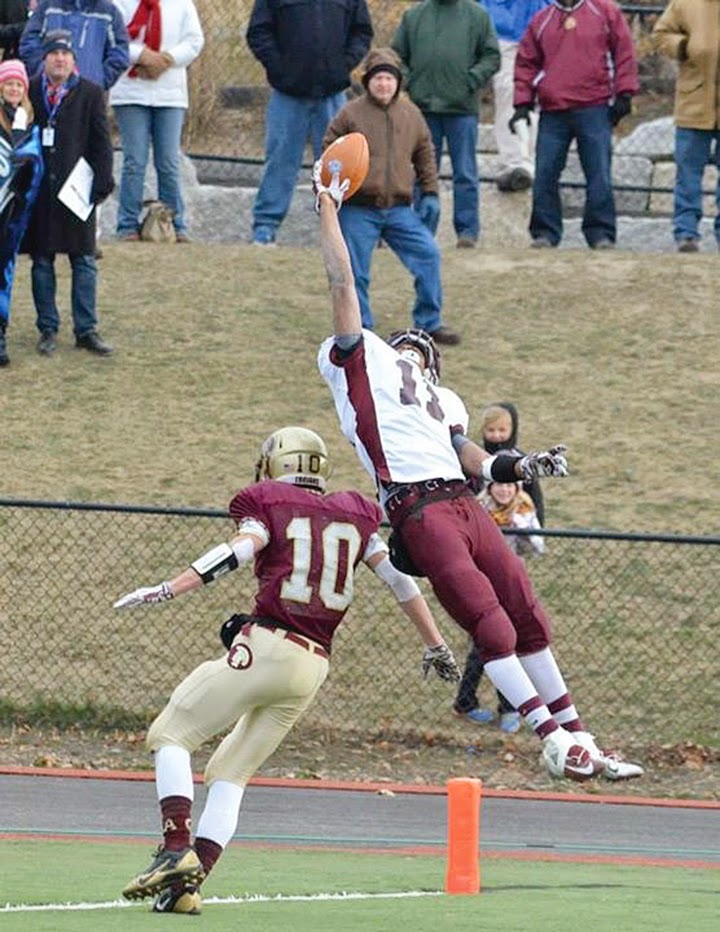 The first half of the game was dominated by the Eagles. The Eagles scored first, a touchdown by Eric Webb. The Trojans tied the game 7-7 with 5:26 left in the half. Windham drove 65 yards in eight plays to regain the lead with a touchdown by Dylan Koza to take the lead ending the first half of the game.
Early in the second half, the Eagles looked to be holding the game when Eric Webb intercepted a pass at Windham’s own 19. However, after two fumbles the Trojans changed the momentum of the game to their side. Senior Matt Roy ran a 51-yard kickoff return to the 24-yard line giving the Eagles hope that they were still in the game. Desmond Leslie passed to a wide open Zach Davis at the corner of the end zone.

Davis caught the ball, but the officials ruled he had one foot out of bounds. On the fourth down Leslie was pressured and threw an incompletion and the Trojans took over the ball. The game ended 35-14. 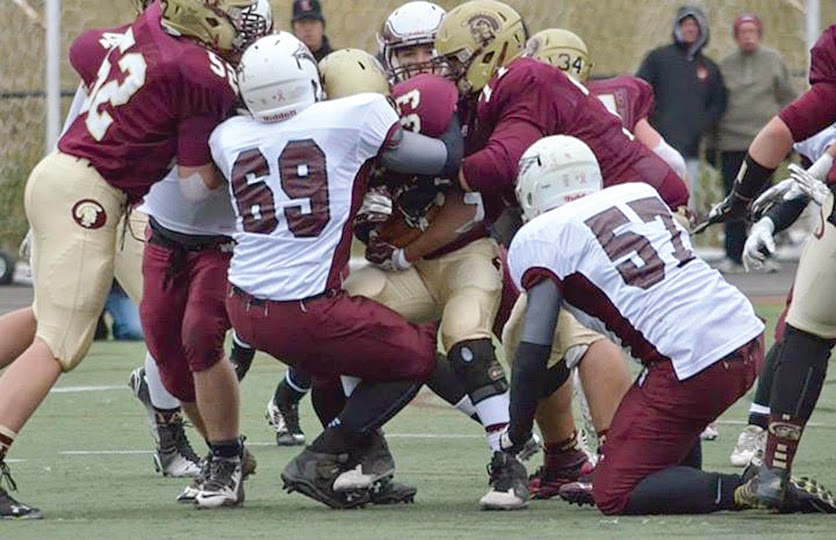 The Windham Eagles accomplished a lot in the 2014 football season. The Eagles ended their regular season game schedule going 9-2. The boys won the Eastern Maine Class A Championship Title, and won a spot in the State finals game. Congratulations to the team from all of us at The Windham Eagle.

“As a parent and a Windham resident I couldn’t be more proud of these boys, this team and the positive attitude they have had all season. In my eyes, this team as a whole, are winners and I look forward to next season.” – Stephanie Coffin 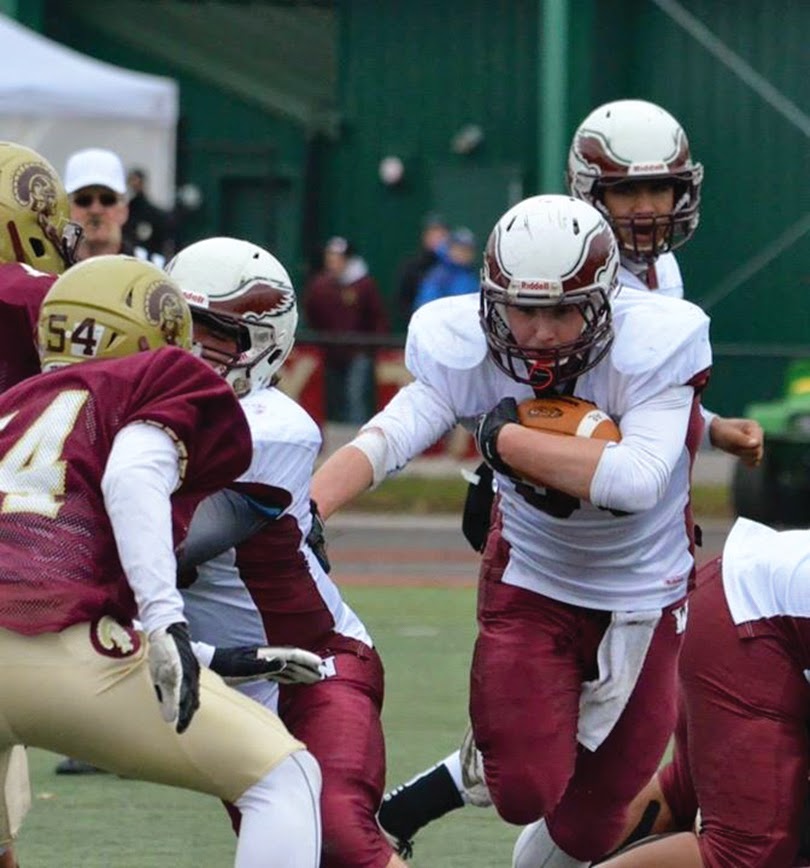 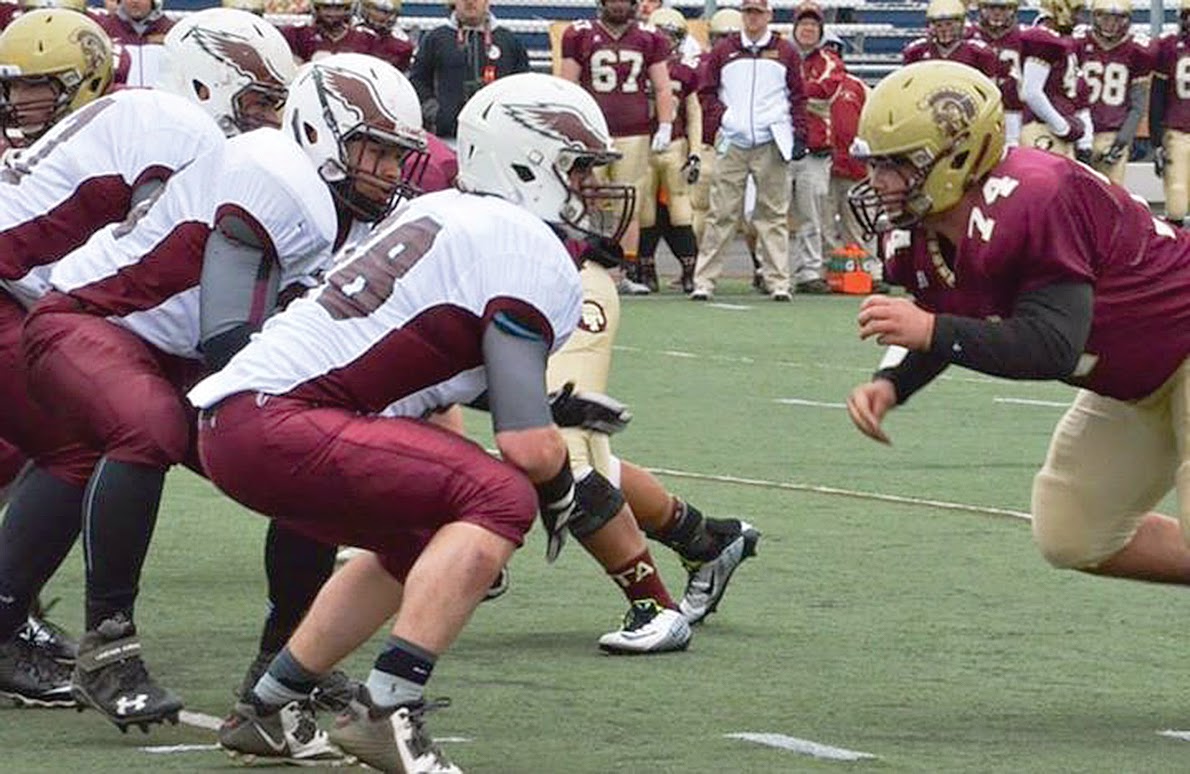 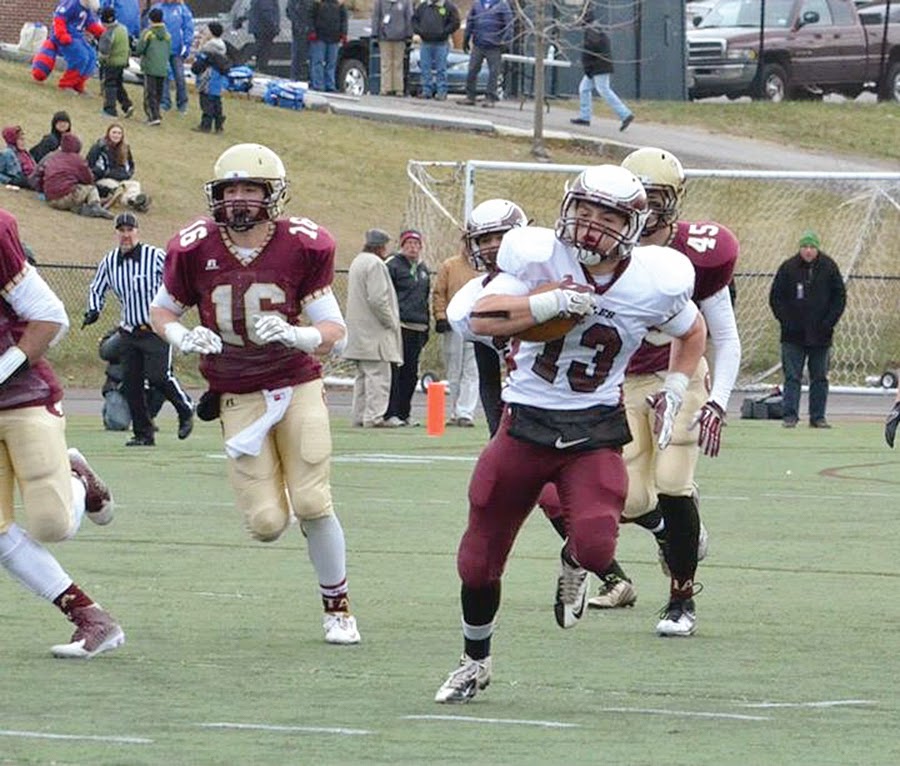 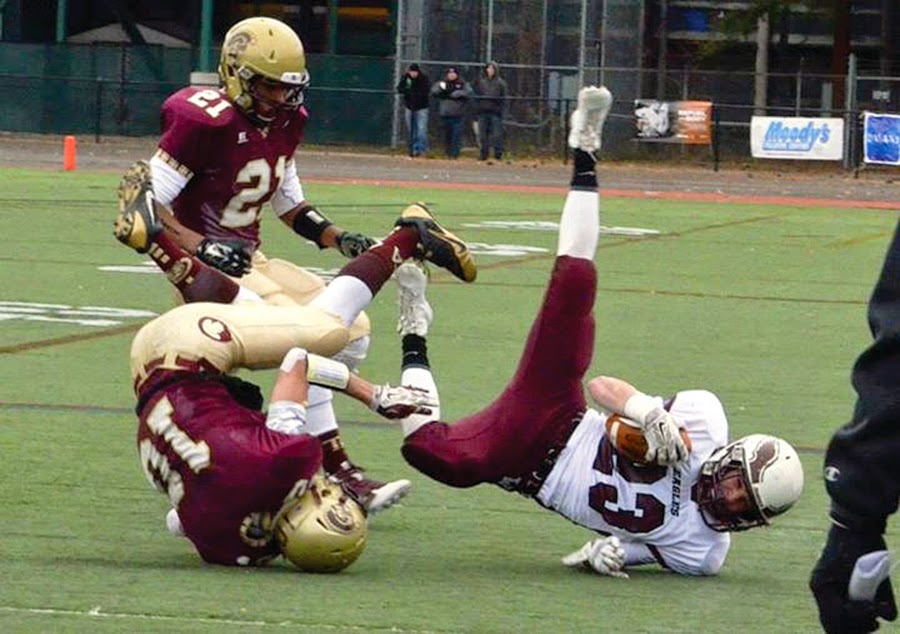 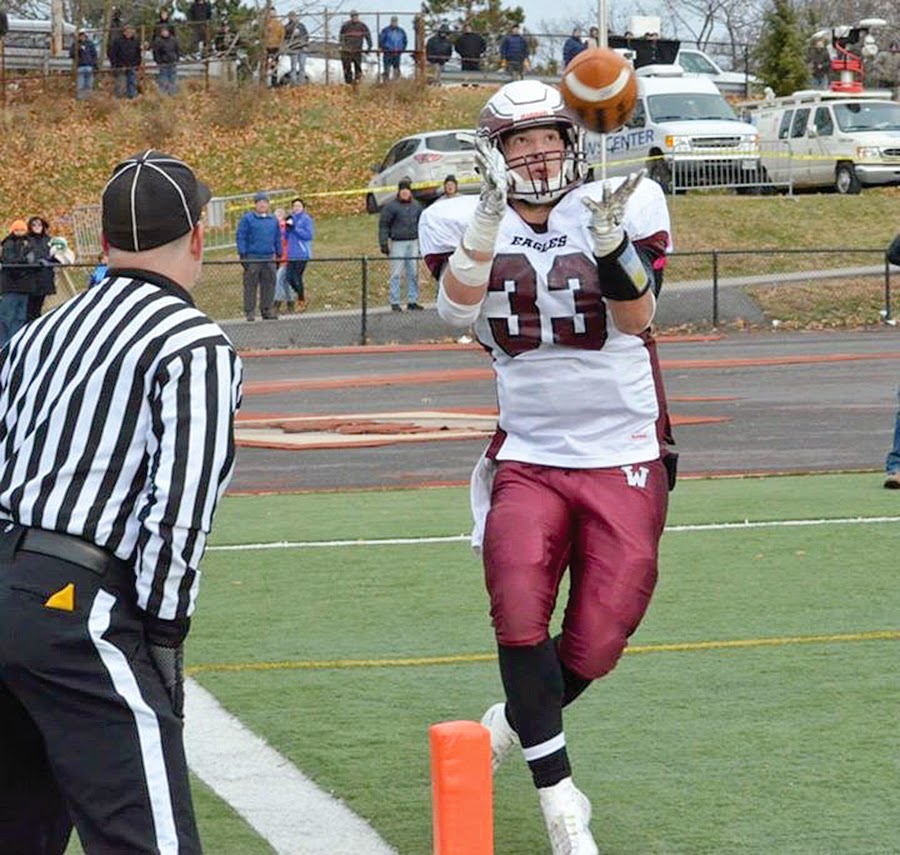 Posted by Michelle Libby at 10:26 PM No comments:


Saturday November 15, 2014, was a day to remember for the Windham Varsity Football team. Nothing stopped the fans from claiming a spot on the sidelines. Both teams gathered at Boulos Stadium located on the Cheverus school grounds to watch the Eagles face off against the Cheverus Stages for the Eastern Maine Championship Title. 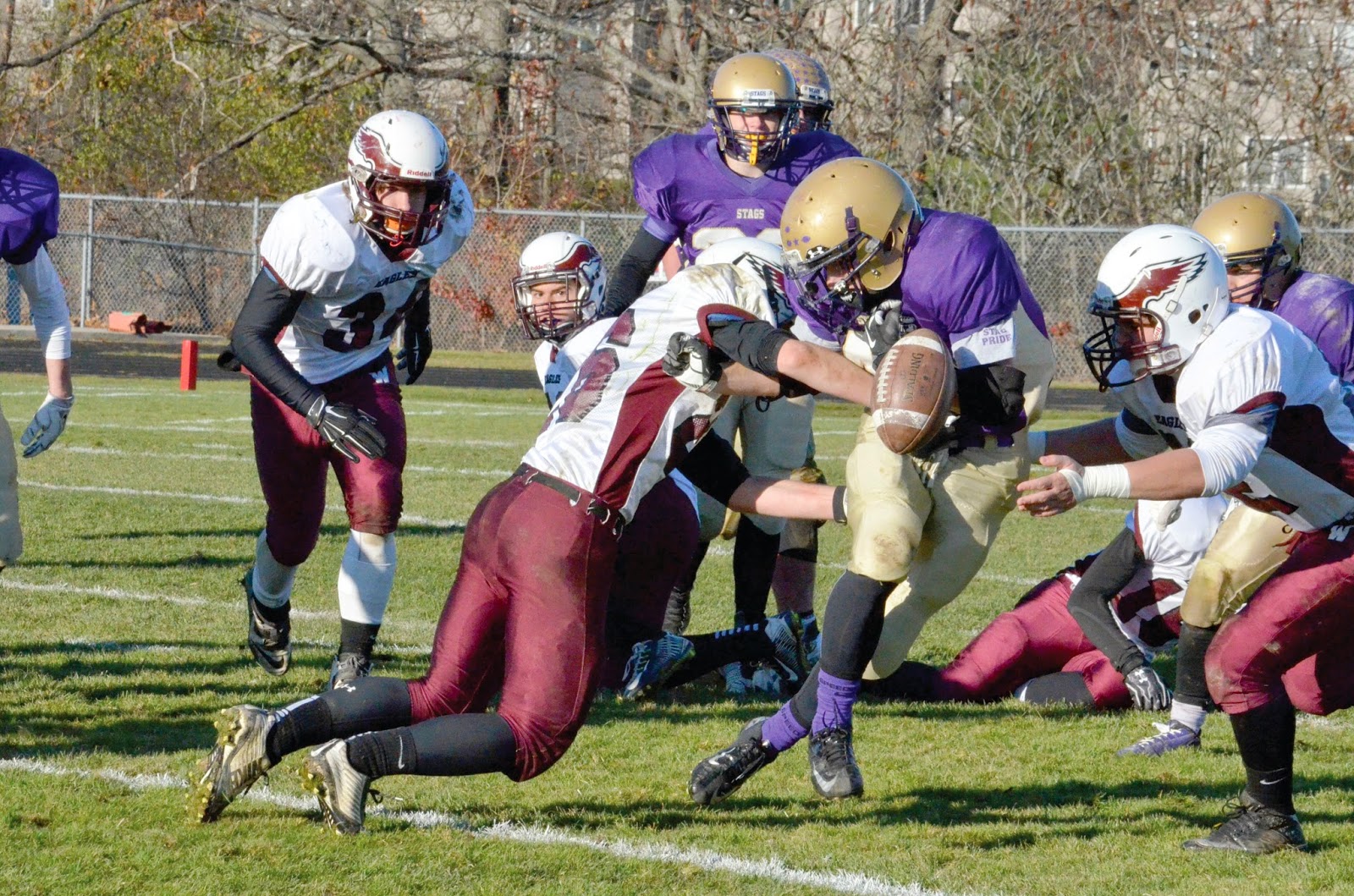 The Eagles had beaten the Stags 35-7 in week four of the regular season which was a surprise to everyone but the Eagles and Eagle fans since Cheverus had been on a 36 home game winning streak.
Both teams had to face the crisp weather along with a breeze coming off the bay and the ball moved both ways on the field, while challenging each other on both offense and defense plays. After the first half of the game ended the score had Cheverus leading 7-3. When asked why he didn’t go for the first down and instead went for the kick, Windham coach Matt Perkins said, “It wasn’t the right situation and I knew (Dugas) would make the kick. You have to know your players.”

The action and excitement came in the second half of the game. Cheverus scored again, bringing the gap to 14-3 on the scoreboard. However, as seems to be the trait with the Eagle teams, they rallied from a 14-3 deficit going into the fourth quarter. Quaterback Desmond Leslie’s running was a key factor in this game. “We knew we needed to have a third runner if we were going to beat Cheverus. Here’s a kid who started the year with no varsity experience,” said Perkins. 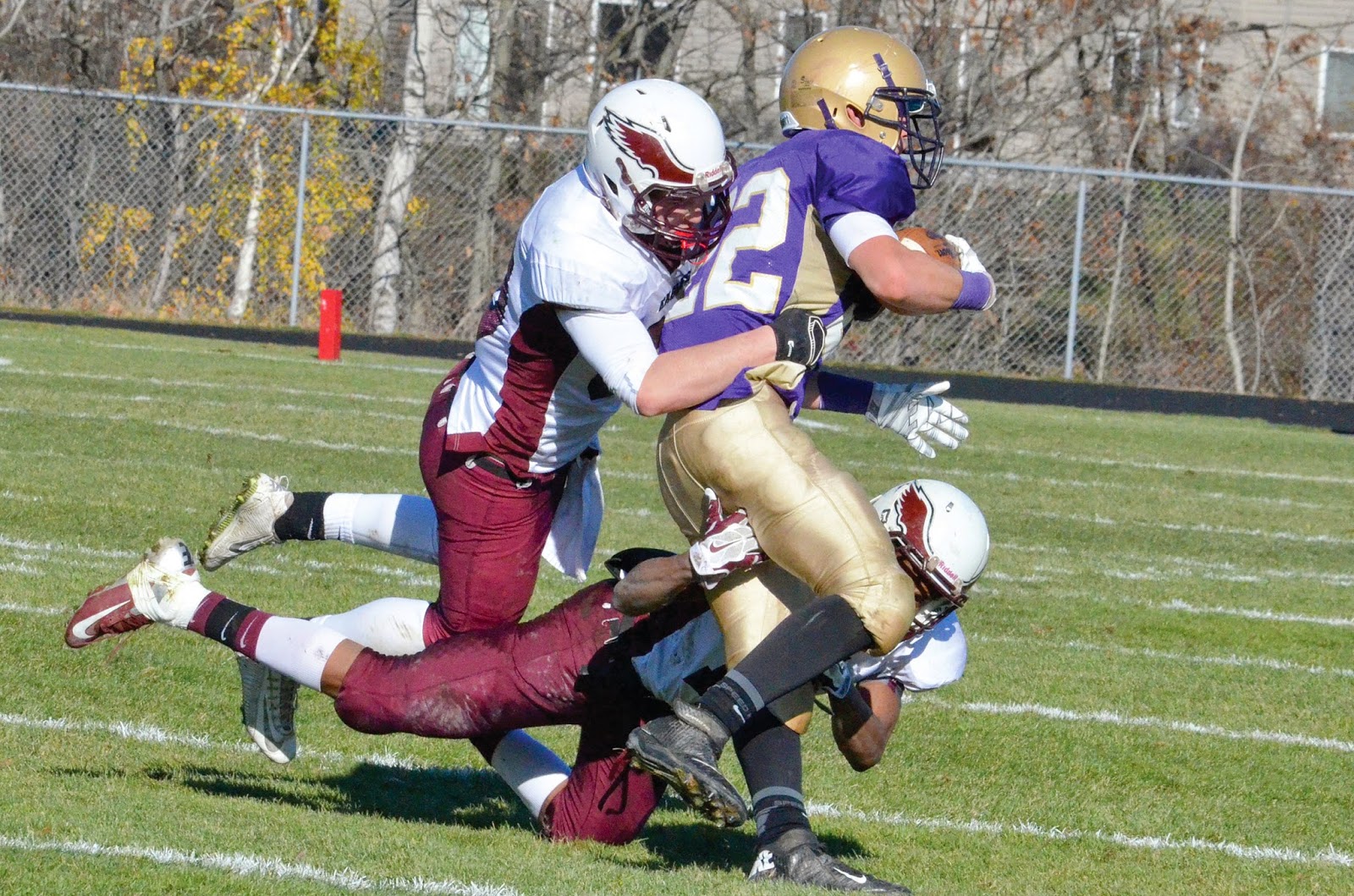 Both teams were hurting by penalties, mostly for holding. Cheverus suffered three costly errors; a high snap on a field-goal attempt, a fumble in the third quarter, and the most costly error, a fumble on the kickoff in the fourth quarter. As Cheverus caught the kickoff he ran into his own player causing him to stumble and be tackled by two Windham players. Griffin Jacobson capitalized by recovering the fumbled ball in touchdown territory, this led to Josh Dugas’ 29-yard field goal that ended up tying the game 14-14 with 5:24 remaining in regulation play, sending this game into overtime. 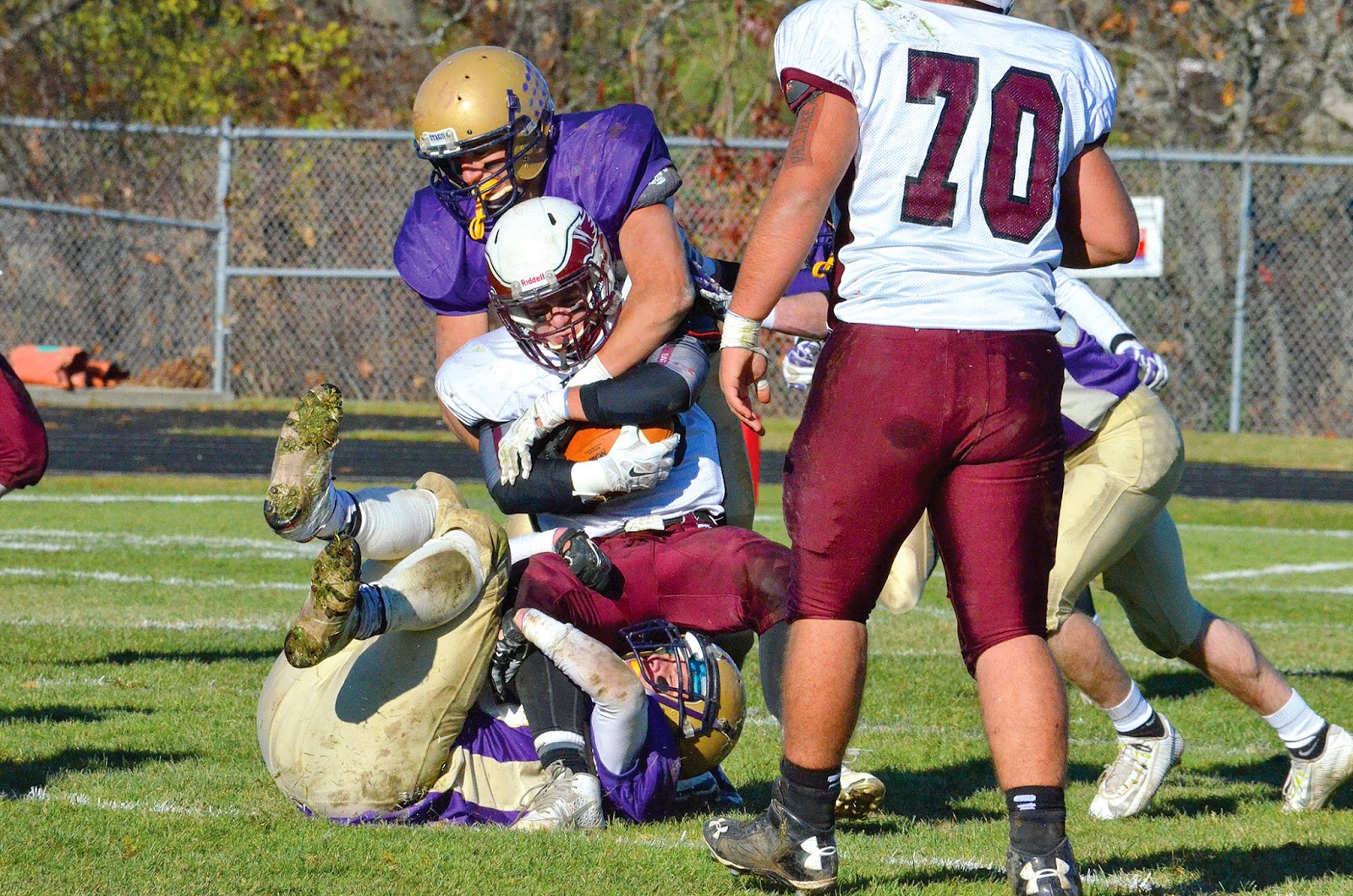 In overtime, each team gets the ball at the 10-yard line and keeps repeating it until there’s a winner, Windham received possession first and scored easily on Dylan Koza’s run. Dugas’ kick was clear sailing, which made the score 21-14. Cheverus was looking to match the Eagles and force a second overtime. It looked promising when quarterback Isaac Dunn scored a touchdown on the second play. Then came the snap for the field goal attempt. Senior Tanner Laberge came charging in from the left side to get his forearm on the kick and successfully blocking the extra point giving the Eagles the Eastern Maine title with a dramatic 21-20 victory. “We work on our PAT blocks all season. I got a good start on the snap. The ball hit my arm. This feels amazing. I can’t even explain what happened,” said Laberge. “We said beforehand that we had to block it.” 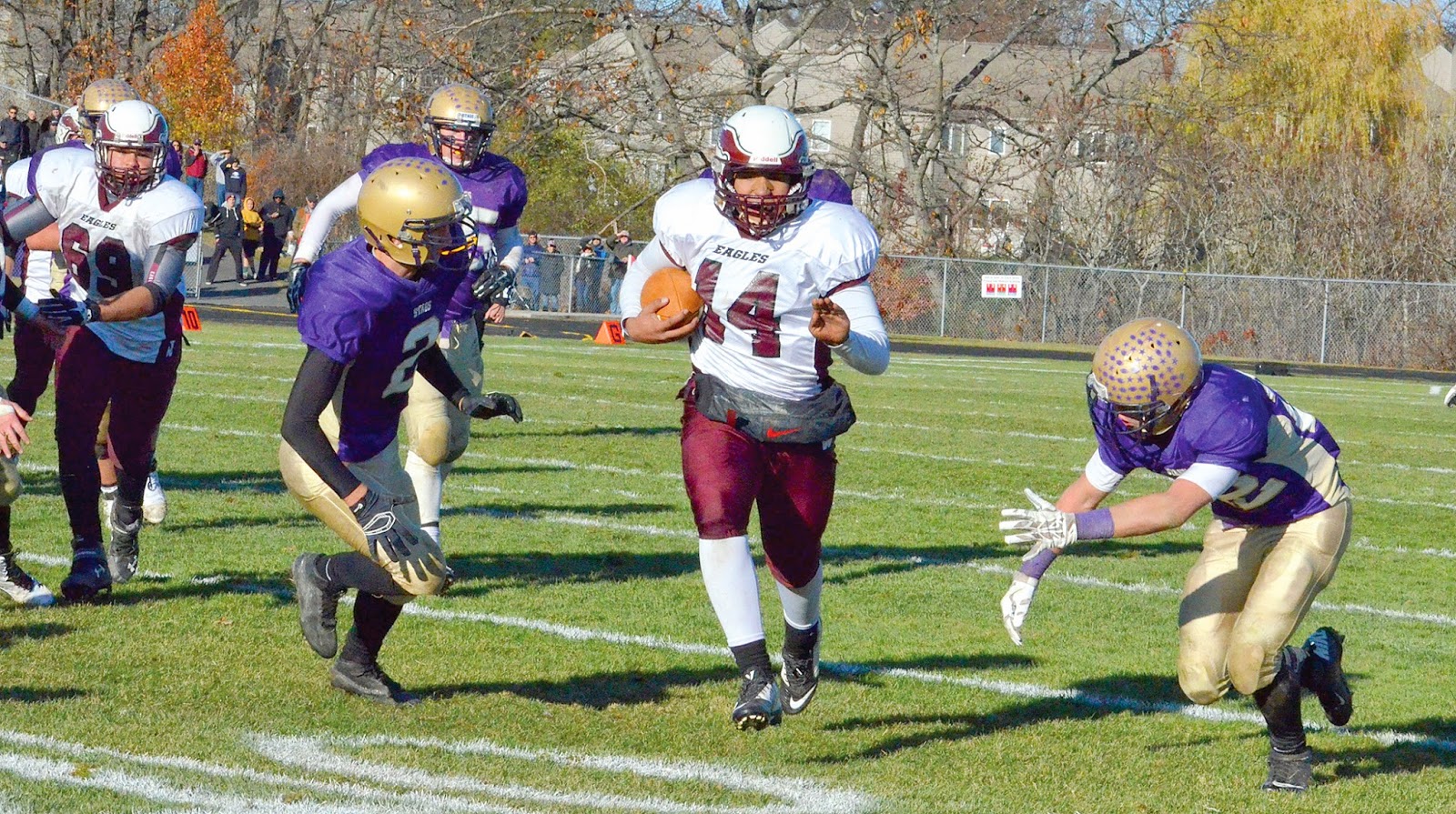 Windham (9-1) will take on Thornton Academy (9-1) in the state final Saturday at Fitzpatrick Stadium in Portland at 11 a.m. Windham will be making its first appearance in the state championship game since defeating Bangor in 2009. 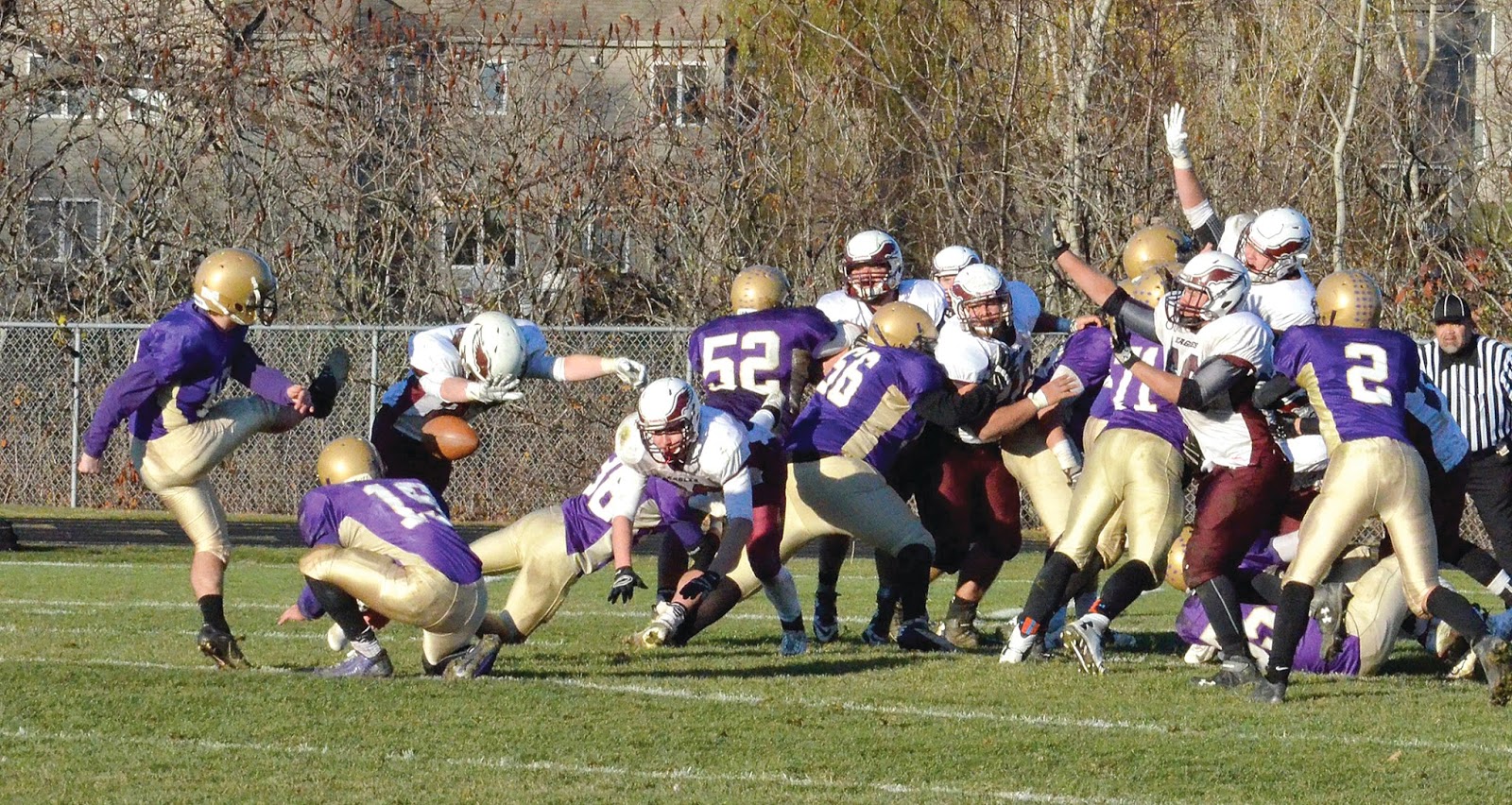 Posted by Michelle Libby at 8:36 PM No comments:

Athlete of the week - Desmond Leslie 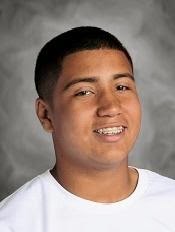 Windham High School football player Desmond Leslie is The Windham Eagle athlete of the week. The sophomore “Showed great poise beyond his years at QB to offensively lead us to the Eastern Maine Championship on Saturday versus Cheverus. He ran for 70 plus yards, scored on a 2-point conversion and had a TD in a performance beyond his years,” said Matt Perkins, head football coach.

Desmond is the son of Tony and Maleeha Leslie. He would like to “Go to college to pursue a degree in business (emphasis not yet decided). I want to play football at the next level, preferably, at a D1 school,” Desmond said.
Best way to unwind after competition: Take a nap and/hang out with friends

Posted by Michelle Libby at 8:33 PM No comments: 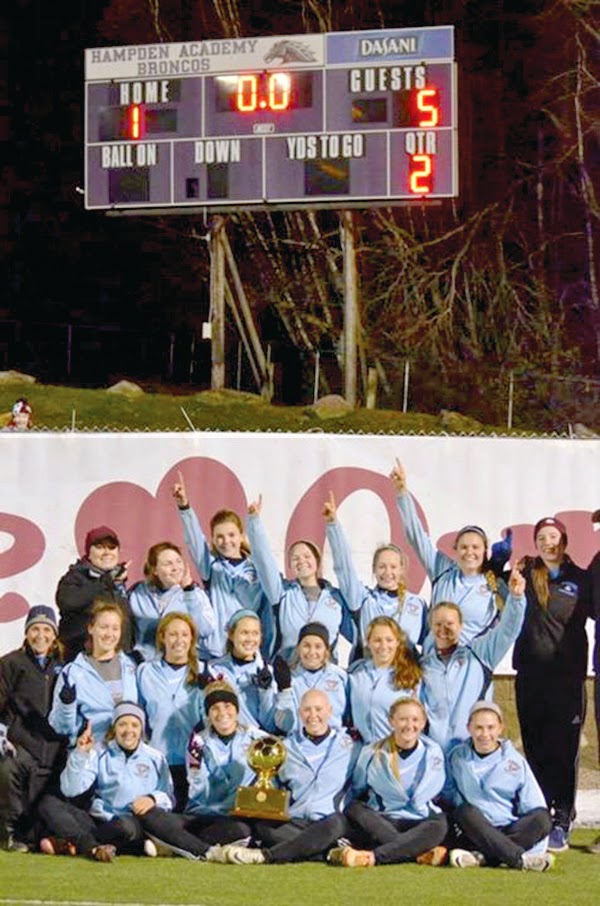 The fans were packed into the complex at Hampden Academy as the Windham Lady Eagles (17-0-1), went up against the Edward Little Red Eddies (13-2-3) for the Class A girls’ soccer championship last Saturday night.

As in the quarterfinals and semifinals the Lady Eagles trailed the game and at halftime they were down 1–0, but fans of the ladies knew that this is no cause for concern. Windham trailed in all three of its Western Maine tournament games.

Windham kept the pressure on and dominated the second half of the game scoring five goals to beat Edward Little and claim the Class A title. It was the second straight State title for the Lady Eagles who stretched their unbeaten record to 36 games.

“We’ve been getting down every game and we’ve come back and stayed strong as a team. That’s what really counts when you’re playing in a game like this,” said Ciera Berthiaume. Ciera tied the game, and then teammate Melissa Morton put the game away with a hat trick – three goals in 8 and a half minutes. Jenna Soucy added in a free kick for the final goal from 27 yards that sealed it.

Eagles Coach Deb Lebel kept telling herself her players would rally again. “I was just hoping it would be a little earlier,” Lebel said. “I wasn’t too nervous. But for some reason they like to give you a good show.”

Edward Little tried to come back, but Eagles goalkeeper Elizabeth Mycock stopped any of those chances from happening.

“This is a special team,” Lebel said. “They know how to dig deep.”

The team returned home to Windham to a police escort to arrive at a special celebration at Windham High School. 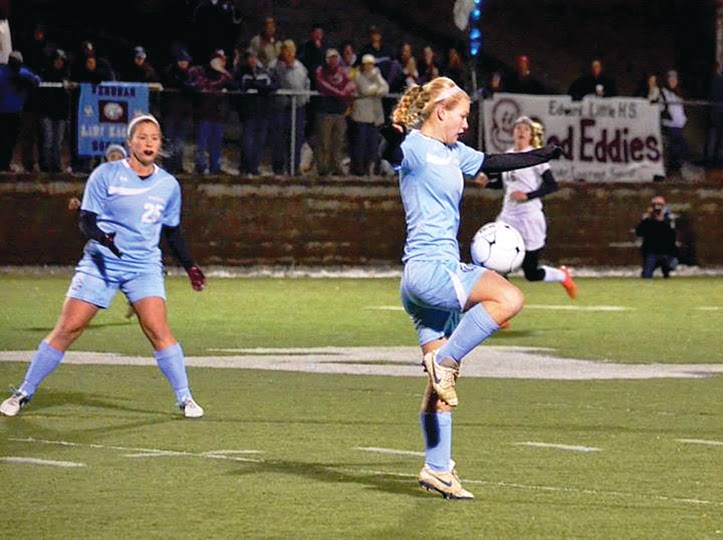 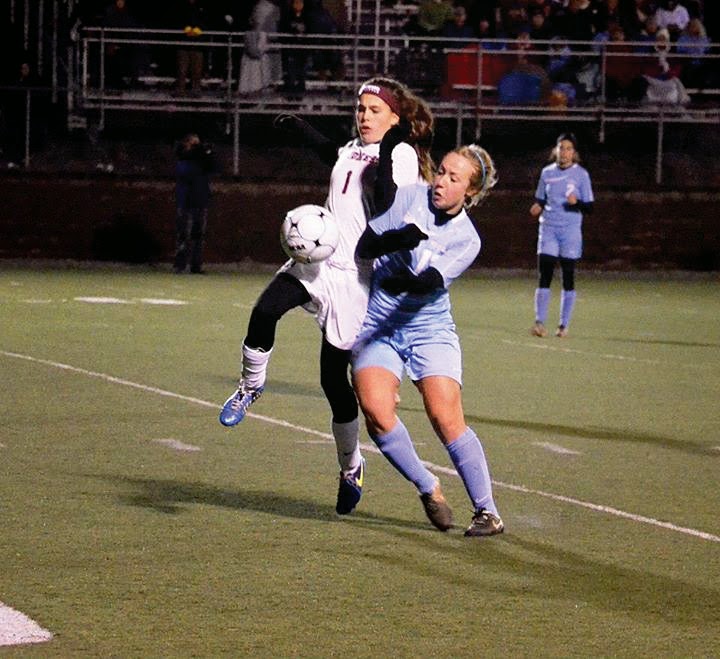 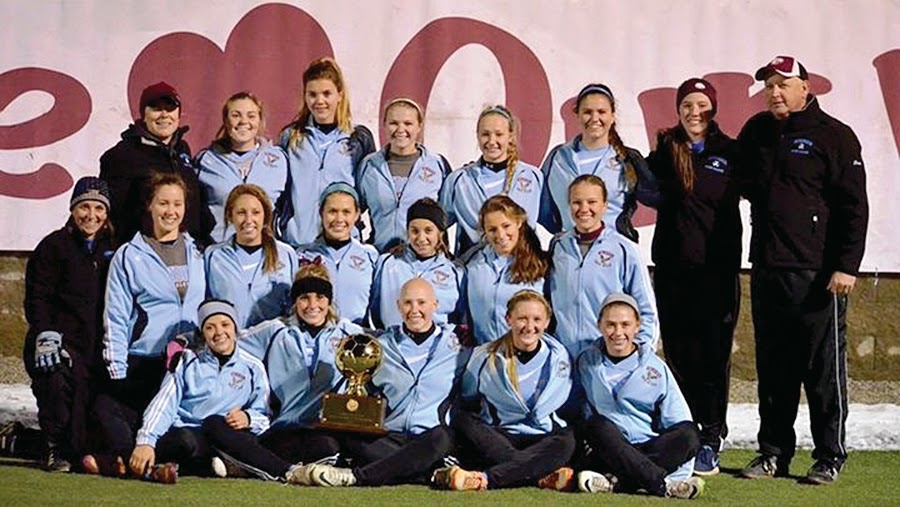 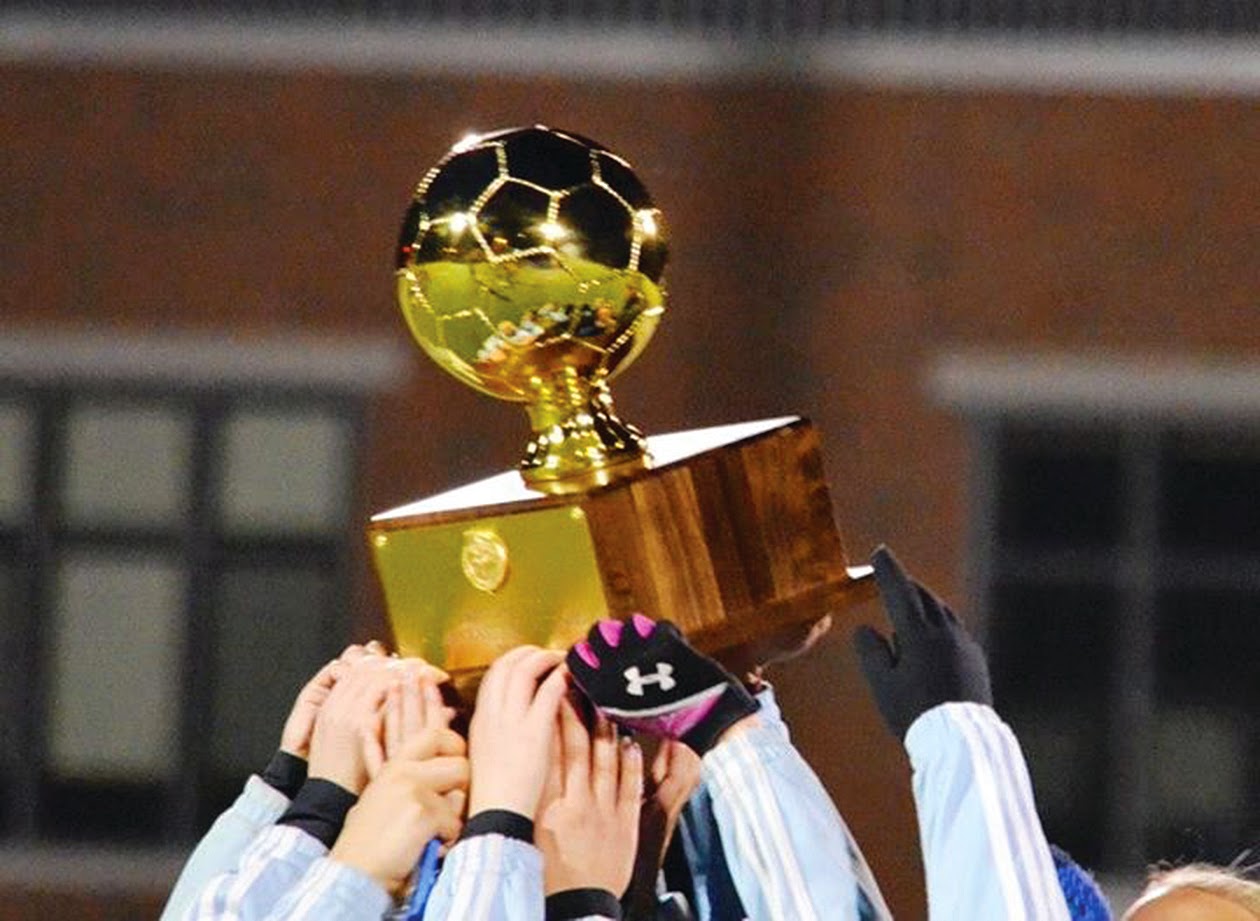 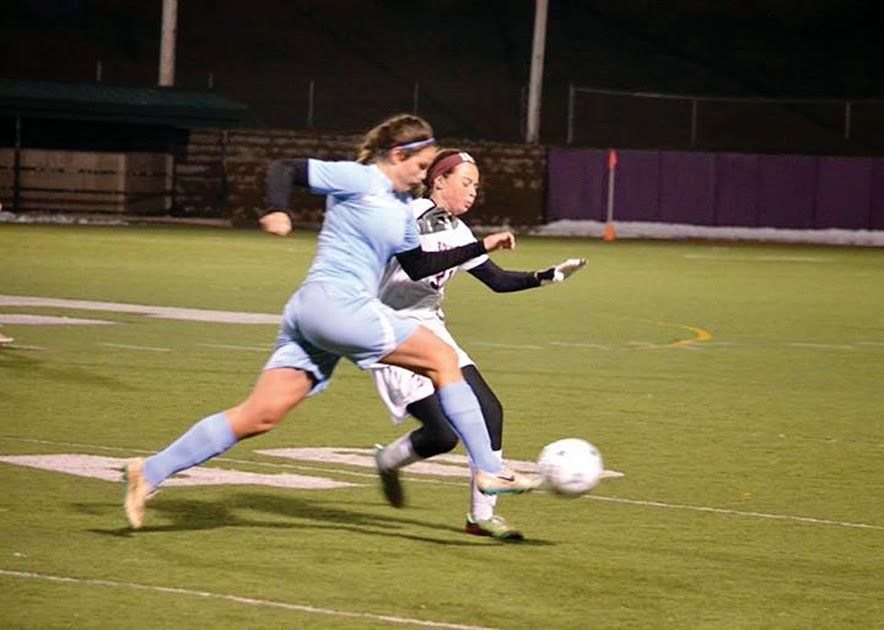 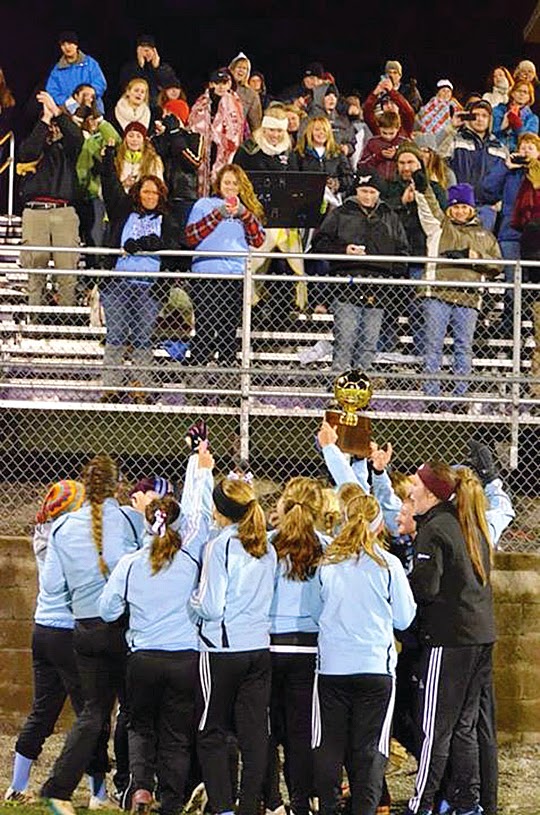 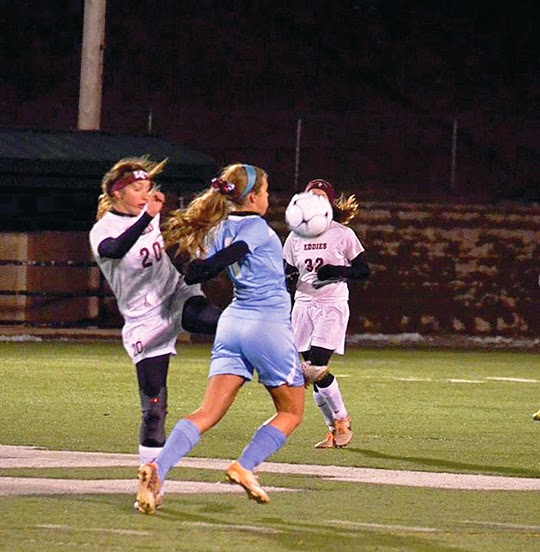 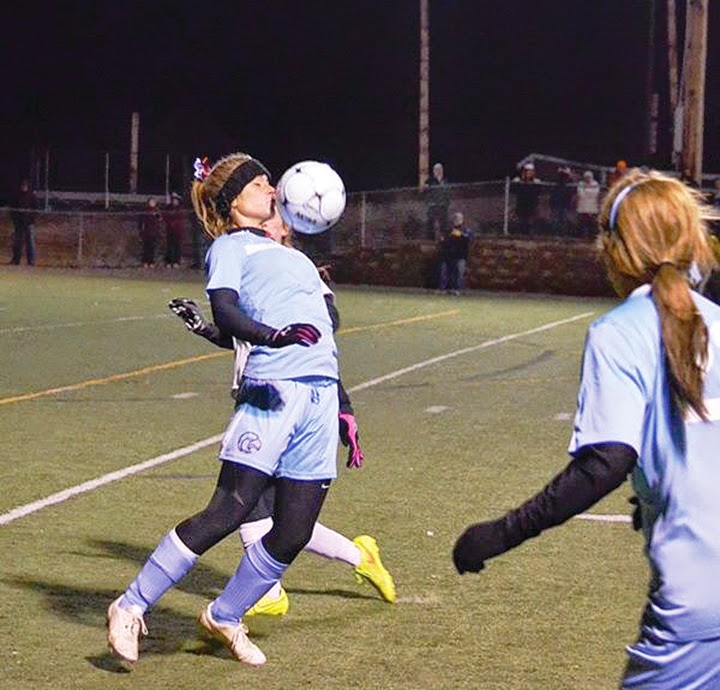 Posted by Michelle Libby at 10:35 PM No comments:


It was a cold and windy Friday night under the lights for both the Windham Eagle and Portland Bulldog fans during the Eastern Maine semi-final football game. The game was an exciting one that had fans from both sides staying until the end. After experiencing their only loss of the season to the Bulldogs, the Eagles had something to prove and that was that they could beat them at this game of football. 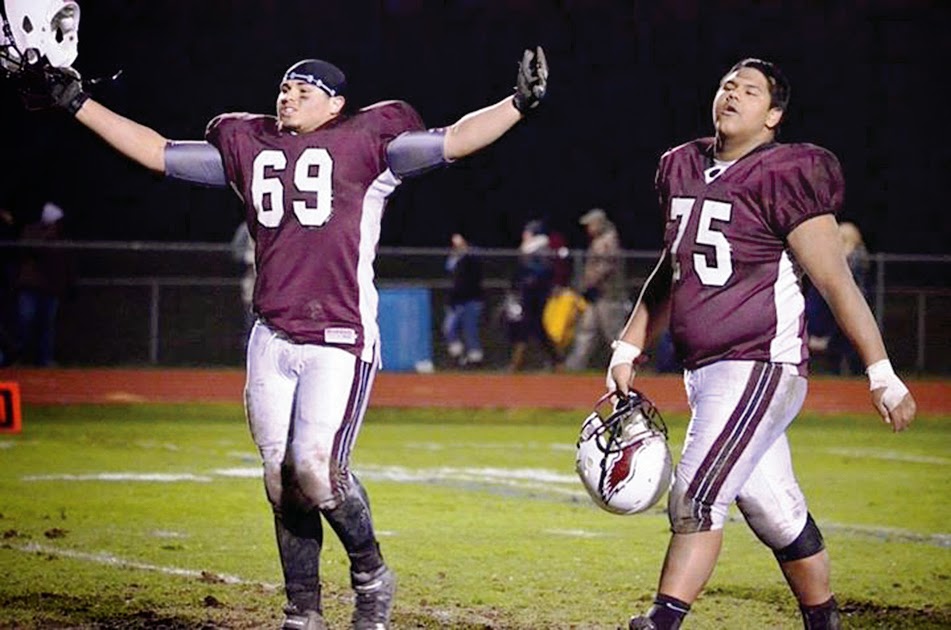 Portland enjoyed leading the game three different times; however, sophomore quarterback Desmond Leslie found his way into the end zone to put the Eagles on top of the scoreboard where they stayed. After one last drive from the Bulldogs the Eagles ran the clock down for a 21-17 victory and handed Portland a painful end.

"It was a hell of a game," said Bulldogs coach Jim Hartman. Portland, which had come up with big defensive plays all season, needed perhaps one more to clinch this victory, but instead, the Eagles would came up big when it mattered most. 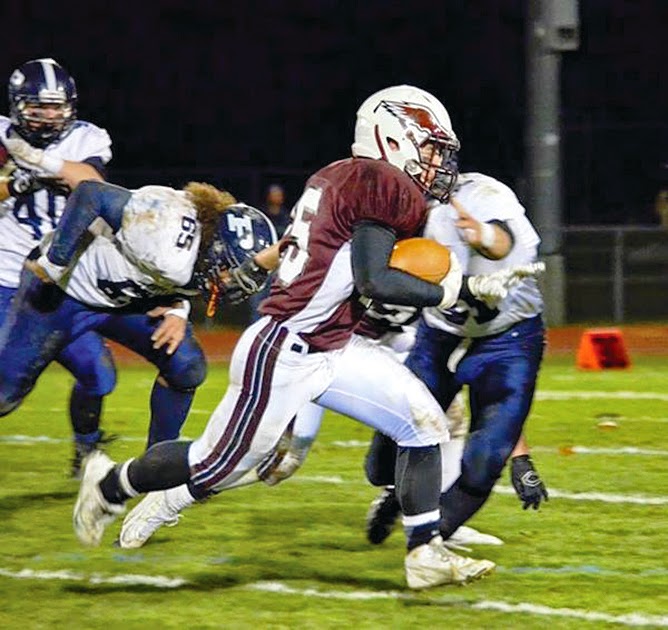 Starting from its own 26, Windham got a big break when, instead of facing third-and-seven after Leslie threw an incomplete pass, it benefited from a roughing the passer penalty and earned a first down at the 44. Leslie moved the chains with a five-yard run. After Koza ran for a yard, Leslie dropped back and launched the ball down the right sideline, which Webb caught and took to the 5-yard line. Dylan Koza worked his way to the edge of the goal line on third down, but the Eagles weren't in yet and had only one more play to make it happen. In the biggest play of the night, Leslie kept the ball and moved the pile closer to the end zone. Josh Dugas gave Windham a 21-17 lead, meaning the Bulldogs needed a touchdown to win.

Portland worked hard to work the ball downfield. However, after a pass, a penalty plus an Eagles' personal foul penalty, Talbot ran for one yard, he then threw two straight incompletions, and with 1:39 to play, the Eagles took over at the Bulldogs' 45. With no Portland timeouts remaining, Leslie was able to take a knee on three consecutive snaps and that drained the clock as Windham held on to win, 21-17. 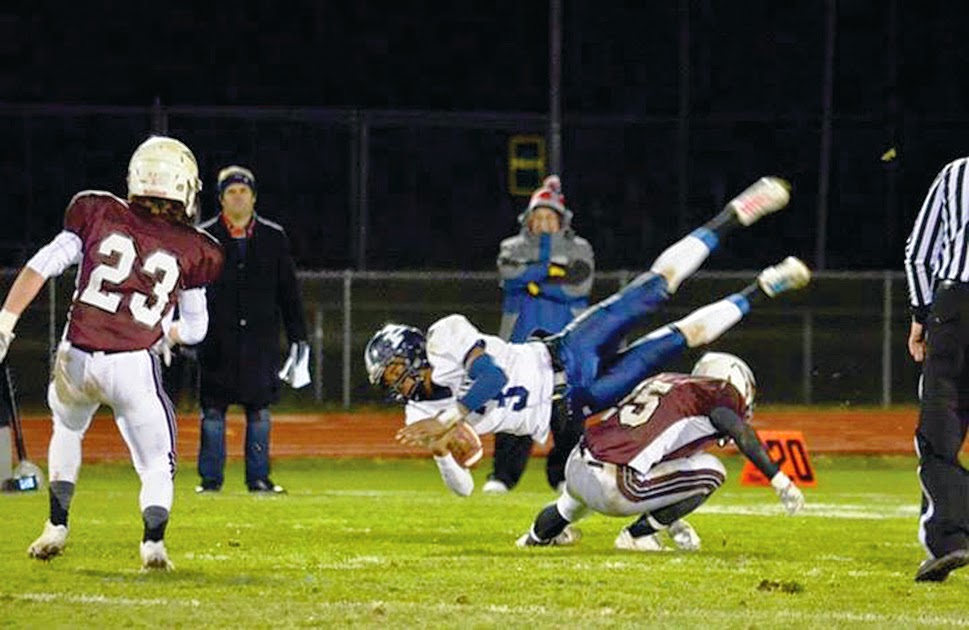 Windham improved to 8-1, beat the Bulldogs in the postseason for the first time in three tries, and have advanced to this weekend's Eastern class A final to battle 7-1 Cheverus. Game time 12:30 p.m. at Cheverus on Saturday. 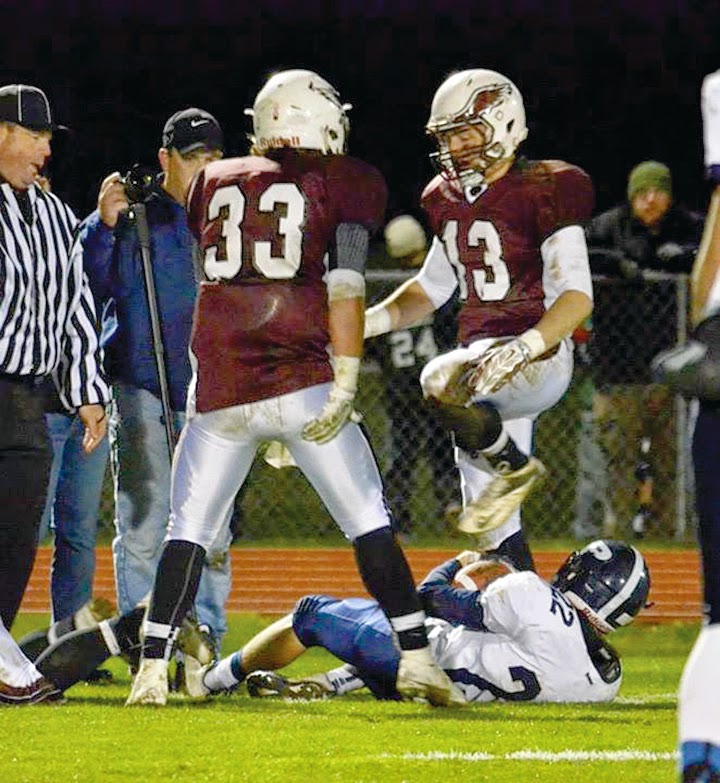 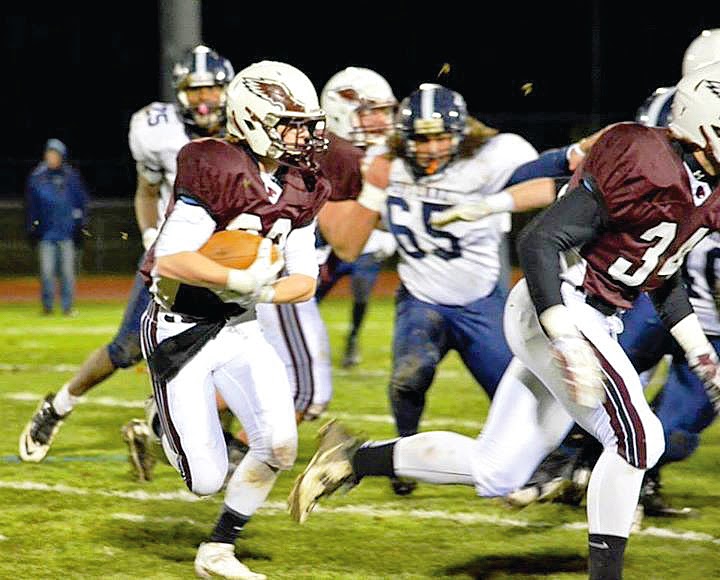 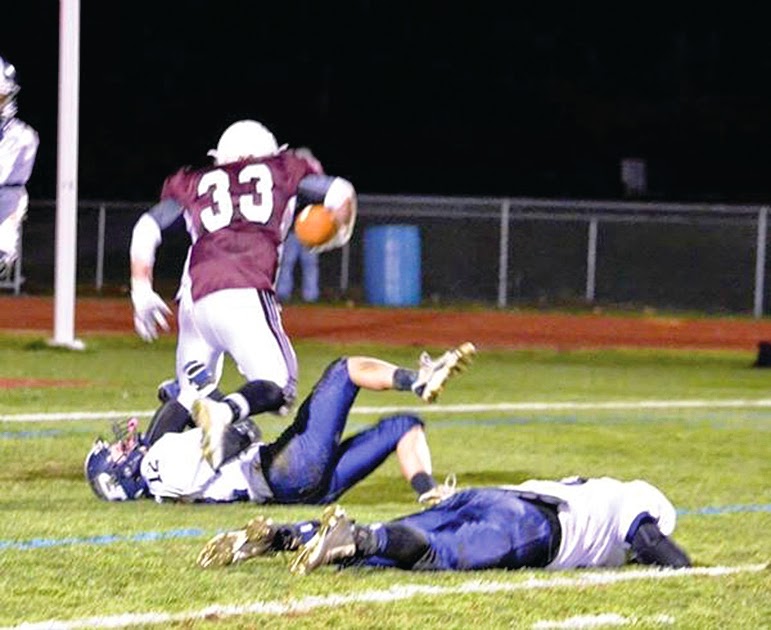 Posted by Michelle Libby at 10:28 PM No comments: 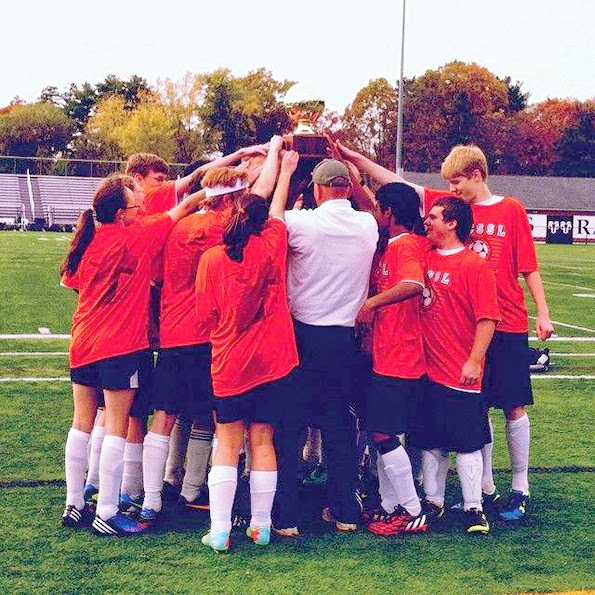 Sports League (MCSSL) soccer championship. The MCSSL is made up of 14
Christian schools throughout southern Maine.


In the championship game, Windham Christian's offense was back to full strength after having lost three starters to injuries during parts of the season. The Warrior's offense controlled play for most of the game and came away with the 7-2 championship win. Leading the way were: Noah Seavey, four goals, two assists; Christian Twombly (captain) one goal, three assists; Alex Williamson (captain) two assists; and Brandon Berry two goals.

The defense for Windham Christian was solid all season allowing just 17 goals on the season, by far the fewest in the league. Led by defensive captain, Jason Gulstrom in goal, the defense consistently turned back the Seacoast attack and put the ball back on the feet of the Warrior offense. Defensive standouts were Matt Fletcher, Ausashia Day, Katie Willard and Seth Strout.

Coach Roy Mickelson stated, "This was a total team effort, every player gave their all and every player contributed to the team's success. I am so very proud of this team for how they have embraced the team concept, honored one another, and for the lessons they learned doing so." 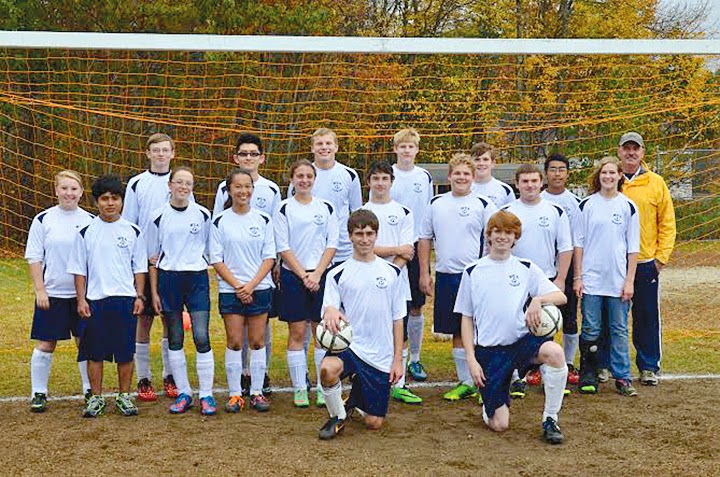 One team united, one team believing "we can do it", one team that gave 100 percent. Seniors: Alex Williamson captain, Christian Twombly captain, Daniel Yu