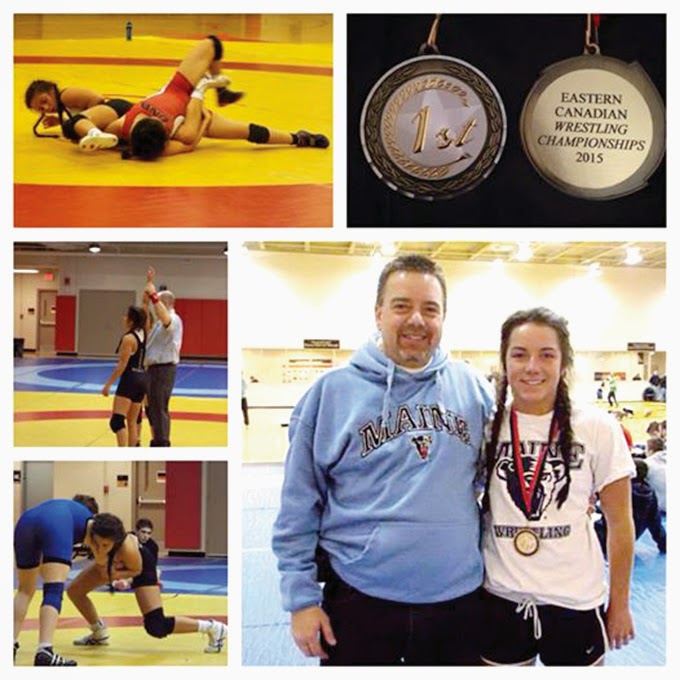 Samantha Frank, a girl who is known to her friends and family as “Sam” started wrestling when she was in the seventh grade and continued up through to her senior year at Windham High School. During this time Sam has won multiple state championships, a New England Championship and also competed in the National tournament in California where she placed second in the country. School records were broken by Sam and she was first female captain of the Windham wrestling team. Years of self-discipline, strict diets, several practices a day and support from family and friends helped her become the person and the athlete she is today.

Sam is now a freshman at the University of Maine at Orono where she is studying nursing. Along with focusing on her nursing major, Sam is part of the cheering team and the Welcome Committee for the Orono campus. Though she was offered scholarships from the University of Idaho and another from a college in Kansas, Sam had decided to give up on wrestling and focus on her nursing studies.

However, she could not retire her wrestling shoes just yet, she still has some competition in her that needs to be let out. The UMaine Coach approached Sam and asked her to be part of the wrestling team. After deciding that she missed the sport, Sam decided to join the team. “It feels great getting back at it, and I'm really glad that I didn't stop after nationals,” Sam admits. Upon returning to the mat, she participated in two only girls’ events in one day, the 2015 UNB Wrestling Invitational and the Eastern Canadian Championship in New Brunswick. Sam took home the gold in the Women’s 48 Kg event and went 7-0 with wins for the day.

Back in the wrestling mode, Sam is planning to continue this sport and represent UMaine for the remainder of college. You can also find Sam working with the Southern Maine Trappers where she was offered and has accepted a job coaching girls who want to participate in the sport of wrestling.

When asked how she felt about teaching the art of wrestling to incoming young girls, she stated, “It's honestly so humbling to be an inspiration to young girls in the sport. I know what it's like to have someone to look up to, and how highly I think of the people I look up to, so I'm really grateful and flattered that some girls do look up to me. It helps me to strive to be a better person, and not to give up when times get tough because I have so many people behind me who would be let down. It's pushed me through my high school career and it's definitely followed me through college, on and off the mat.”

“I like that people have expectations for me, because it gives me something to work at, and something to exceed. I like to go above and beyond and continue to surprise myself and others around me. I think that being offered the coaching position was really just a cherry on top of all of my busy work. I had always seen myself as a helper and a coach but never thought I would be getting into it so young. It's really an awesome experience and it will help me grow as a wrestler, and as a person. I am most excited to help them to set goals, and work hard every day at practice and in every match to reach their goals.”

“I think that it's really important to set goals because it's something to work for and it gives you a sense of worth once you reach them. It's a feeling that you can take with you in anything, not just wrestling. If you can set goals, and achieve them I think that it makes you realize how much you truly can accomplish if you just set your mind to it and work at it. Wrestling has definitely become a huge part of my life, and it's truly changed who I am as a person. My coaches have had a huge impact on me, and they're most of the reason I am who I am today. So being able to be that mentor, and leader that an athlete looks up to really is a huge complement and I hope to make a positive impact on all of them, as my coaches did for me.”

It’s easy to see why and how this young lady has become an inspiration not only to young girls but to girls her own age. Sam is not only inspiring girls, she is inspiring the parents of those girls to make sure daughters are encouraged to aspire to their own potential and remember to “step out of the box” like Sam has.
Posted by Michelle Libby at 10:00 PM