Athlete of the Week - Connor Abbotoni 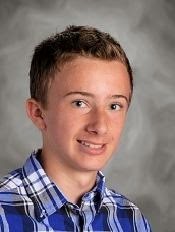 The Windham Eagle athlete of the week is Connor Abbotoni, an eighth-grader at Windham Middle School. Son of Todd and Krista Abbotoni, he enjoys soccer and track.

“Connor's work ethic has translated to his success in his races.  He's always seeking ways to improve.  He shows integrity and dedication on and off the playing surfaces,” said coach Philip Jackson.

One day he would like to professionally compete in track and field. Connor’s best way to unwind after a competition is to “Sit on the couch and eat something.”
Posted by Michelle Libby at 4:43 PM