At first glance Zander Unger might seem like an ordinary eleven-year-old boy. He loves animals and is involved in an array of activities – archery, tennis, skiing, horseback riding– and he is a little shy. But after a few minutes with Zander and his mother, Jen Cote, it becomes quickly apparent that Zander’s altruistic spirit is anything but ordinary. 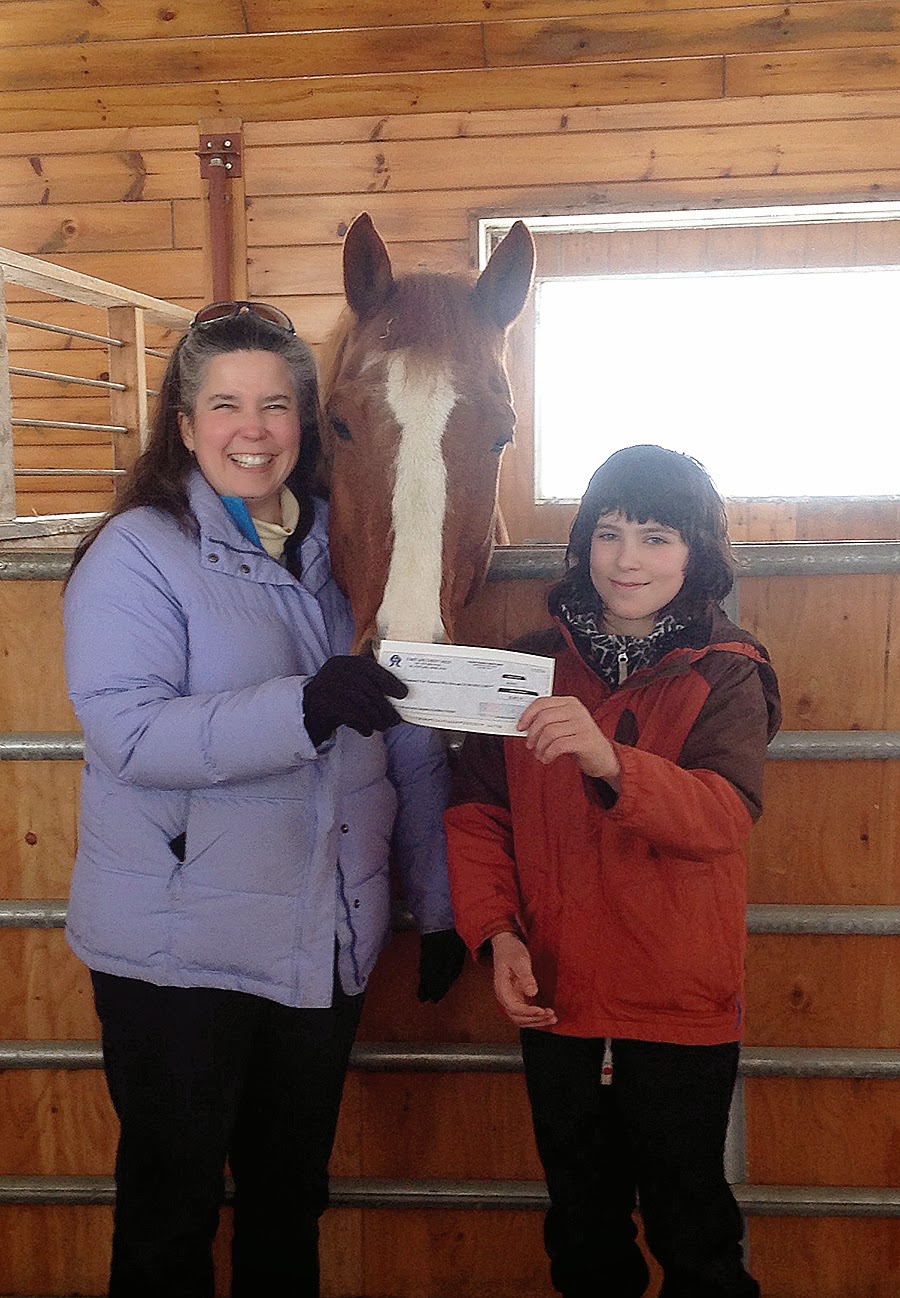 Since December 2013, Zander has raised $3,784 for the horses at the Maine State Society for the Protection of Animals, through a project that he and his mother created under the name Kids Helping Horses. Jen and Zander came up with the idea after attending the Cumberland County Fair and speaking with an MSSPA volunteer about the organization’s annual Buy a Bale Campaign. In previous years, Jen and Zander had visited the MSSPA, but hadn’t been personally involved. At the time of the fair, Jen, who teaches a community of homeschooled children that includes Zander, had been looking for a way to teach marketing skills.

When asked how the project began, Zander hesitates, as though it is something that he’s always done or was built into his character. After all he began taking care of the bunnies at Hearts and Horses in Maine when he was only four years old, and horse rehabilitation has always been close to his heart.

Kids Helping Horses, whose ultimate mission is to raise money for the horses at the MSSPA, got into full swing when Zander and Jen recruited a group of five children and together began envisioning a strategic plan. It went like this: The group created a large number of donation cans that they would place in local businesses. Zander and the other children in the group came up with a number of community businesses they wanted to approach and started going door to door. When asked how he approached each business, Zander replied, “I just said ‘Hi I’m Zander and I’m trying to raise money for the MSSPA, a place that helps rehabilitate horses that were abused and neglected’.” At first he was a little shy, but with time it got easier.

But like any new enterprise the group sometimes had to reevaluate its strategy when the collections were small. For instance, they learned that it was important to have the cans located near the register, and that the cans needed to be neat and well presented, but also compelling enough to appeal to people’s emotions. Throughout it all, they were honing their marketing skills.

Kids Helping Horses picks up their collections weekly and, after finding out that the bank would charge a percentage to use the coin machine, the group decided to roll the coins themselves – almost $4,000 to date. “We wanted to make sure every penny went to the horses,” Zander said.

When asked to choose four words to describe himself, Zander hesitated then finally said, “When I’m trying to do something, I usually first try to do it and if it doesn’t work, I usually try to step back and try to look at what’s happening and see how to fix it or make it easier to do.”

These skills have served him well in the success of Kids Helping Horses, but Zander gives no sign of slowing down. On the contrary, when speaking with Zander and Jen one gets the sense that the project is really just starting. Kids Helping Horses’ overarching goal is to expand the group throughout the state of Maine. Zander and Jen are currently working on a website that will not only tell other kids about the project but, more importantly, will give them detailed information on how they too can participate, including tips on creating the best collection cans and useful marketing strategies they learned along the way.

At home in South Portland, Zander has six cats, one dog, three rabbits, and a few fish – all rescues, even the fish. His family also fosters animals through the Animal Refuge League of Greater Portland. When asked what his favorite animal is, Zander answered – you guessed it – horses. Beyond animals and philanthropy, one of Zander’s hobbies includes Odyssey of the Mind, an international educational program that provides creative problem-solving opportunities for students from kindergarten through college. Zander has been participating in the program since he was seven years old, and has been incredibly successful, winning several state competitions, and even going to the Worlds Final in Iowa, where he met children from all over the world. He is drawn to technical and invention projects and thinks he might want to be an engineer someday.

Lucky for us, for the foreseeable future Zander and Kids Helping Horses will continue to be one of the organization’s greatest advocates, helping raise awareness and money for the horses at the MSSPA.
For more information on Kids Helping Horses, please contact Manuela Arundel at the Maine State Society for the Protection of Animals by phone at 892-30410, or email Manuela@msspa.org.

Posted by Michelle Libby at 8:38 PM