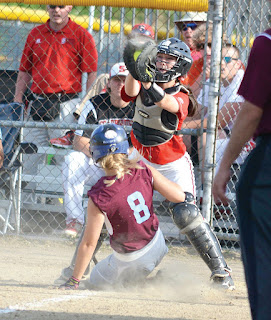 The Lady Eagles didn’t stop playing the game until the last out was applied last Thursday as the Windham Eagles softball team faced off against Scarborough in their first playoff game in eight years. What a season for this team of girls. While some played their last game of their high school career with their heads held high, proud of their teams accomplishments, others will get to come back next season and do it all again.

Scarborough Red Storms (17-0) hosted the Windham Eagles (10-8) and drew a crowd to watch the first game of the playoffs. Despite a big day at the plate for Oliva Mora the Eagles fell 12-4. 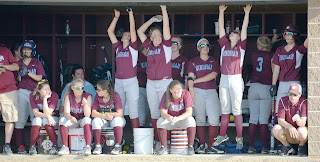 The Red Storms pitcher L. Volk recorded the win for Scarborough as she pitched five innings of shutout ball. Volk struck out 7, walked one and surrendered three hits. S. Burnham, A. Murrell and K. Scoville combined for 9 hits and 5 RBIs. 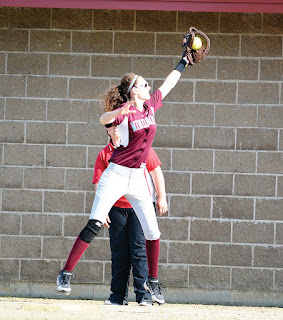 The Eagles Danielle Tardiff was unable to get it done in the circle and took the loss. Tardiff allowed seven runs in four and one-third innings, walked one and struck out one. 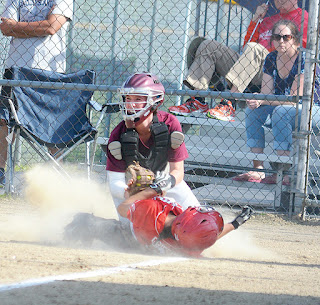 A one-run sixth inning helped bring the Eagles within 10. The Lady Eagles continue to play with a hope to close the gap made by Scarborough. Madison Elliot with a nice pop up to center field and was able to place herself on second base. Oliva Mora up with two outs, pops the ball up for a double allowing M. Elliott to score. Mooridian got to the plate and placed a line drive down the third base line for a foul. As she continued to chip away at the ball keeping her in the game, she finally walked. D. Tardiff was hit by the pitcher making the bases loaded. Anita Mooridian up to bat with a line drive to center, allowed Mora to score. When Lauren Talbot got to the plate, the pitcher over threw the catcher and Windham took advantage scoring another run. Talbot ended up walking loading the bases yet again. Scarborough eventually threw the ball to first for the last out of the game. After pushing across three runs in the top of the seventh, the Eagles faced a 12-4 deficit. An RBI single by Mora, an RBI single by Anita Mooradian, and a wild pitch triggered the Lady Eagles' comeback, which wasn’t enough to move them to the next playoff game.

Posted by Michelle Libby at 6:34 PM