Ultimate Frisbee, an overlooked sport that's all about the fun and flow - By Michelle Libby


Ultimate Frisbee is a sport that has been around for a long time, but is gaining popularity every year. In Windham, its popularity is mostly due to Zach Bailey, a 2015 graduate of Windham High School and a co-captain of the Ultimate Frisbee team.


In 2012, Bailey and Zoe Hall decided to see if they could get a team together. The next year they did some fundraising and got field time. The team then became an official club sport, which allows the team to use Windham’s name on their jerseys. However, the school provides no funding. 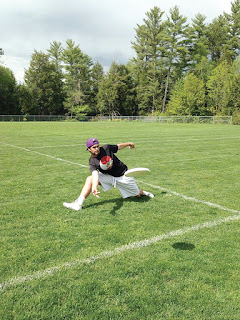 The cost of the sport is only for team registration, league play, insurance and jerseys. The first team is $200 per season, the second team is $100. To play in the state tournament the cost is $200 per team. Each player is asked to pay the $30 for USA Ultimate insurance, which also freezes the roster and makes the team official. Others can still join, Bailey said. The team does fundraisers to pay the team fees each year.

The game is a self-refereed game that is played seven against seven. The goal of the game is to catch the Frisbee in the in zone for a point. You can’t run with the Frisbee and if it hits the ground, goes out of bounds or a defender catches it, the Frisbee goes to the other team. Bailey likened it to a cross between football and soccer. The first team to 13 points wins. Half-time is when the first team reaches seven points. An average game lasts about an hour and 25 minutes.

This year the team started with 22 players. Most times the team played with between 10 and 15 players, due to injuries like broken wrists, broken toes, dislocated fingers and bronchitis, as well as other commitments. 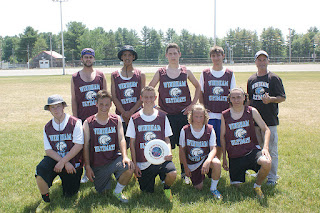 As some of the players had to stop playing, the team went from six wins and no losses to 6-6.
“We have a few very key players,” Bailey said. Half of the team were sophomores this year, meaning that next year could be a stronger year for the team.

“There are a number of exceptional athletes playing the sport from all schools and Windham is doing remarkably well this season,” said team parent Lisa Amundson.

The spring, co-ed sport is played at the Cumberland Fairgrounds and Wainwright Field in South Portland, both are rented out by Maine Ultimate for the league play. 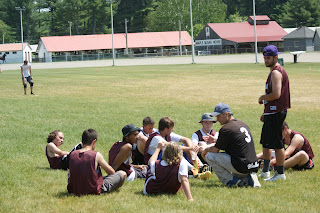 Players of ultimate Frisbee come from all backgrounds. Bailey played soccer growing up and once he reached high school, decided that he wanted something different. Playing Ultimate is all about the drive and the companionship. Bailey thought nothing of flying through the air to make a catch and losing skin from his hip in the process. Other players come from the lacrosse team, track team and the baseball team, or from athletes that don’t normally play a spring sport.

“We cheer for the other team or shake hands. The spirit is good,” he said. “There are no angry players yelling at one another. It’s a happy sport.”

The athletes come from all social groups, Bailey said. “We’re very laid back group of people that enjoy the time together. It’s for fun.”

The team is coached by Paul Amundson and Sonja Florman is the administrator.

After the state tournament Windham players received a letter from Matt Bates from Ultimate Maine. “Congrats to Windham for winning the Boys B team title over Cape Elizabeth!

Thanks to all the teams who participated this weekend, especially the teams that braved the elements and played in some tough rain and wind today!  In spite of the conditions, we played the entire event, the fields held up, there were no serious injuries, and a lot of great ultimate was played by all the teams competing!”

Bailey encourages anyone who wants to try it out, to come out for the team next spring. Watch for signs and listen for announcements about Ultimate Frisbee. Bailey recommends seeking out Trevor Rogers, who has the opportunity to be captain next year.
“We are always recruiting,” Bailey said. “Anyone can pick up a disk and be fine.” Skills are not a requirement Bailey said. Some players come to practice not knowing how to throw a Frisbee. The team encourages those who are tall and/or fast to play with them.

Posted by Michelle Libby at 8:06 PM