The season wasn't the driest or the warmest this year, but the dedication of a baseball player is hard to top. Windham Little League teams consist of 9- to 12-year-old boys that work together during the season, learning to work together while they say goodbye to past members and welcoming incoming members all while forming a bond to keep them strong on and off the field.


The championship game was played at Ciccarone Field at Lowell Farm on June 17th. Zwirner State Farm faced off against C.R. Tandberg. The game went eight innings, which is two extra innings for a little league game. A well matched game on both sides kept the score close. State Farm pulled ahead in overtime to end the game.

Both teams played the season with dedication to the sport, the love of the game and the enthusiasm of a boy wanting to do his best. With only losing one game all season the Zwirner State Farm team went on to become the 2015 Windham Major Little League Champions 7-5. 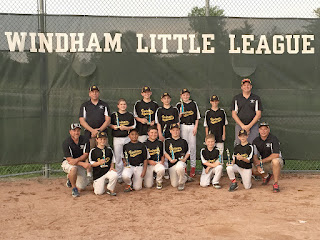 Posted by Michelle Libby at 6:07 PM