Senior Lake Region track star Kate Hall made history at the New Balance Nationals outdoor track and field championships in Greensboro, North Carolina recently. During her final attempt in the long jump, Hall jumped 22'5", breaking the national high school record of 22'3" inches that was set 39 years ago. That mark also broke the junior national record set by Carol Lewis, sister of nine-time Olympic gold medalist Carl Lewis. Hall also competes in both the 100 and 200, and finished third in the 100 with a time of 11.37 seconds, which is the fastest ever by a Maine woman. That time is 0.04 away from the qualifying standard for the U.S. national championships. 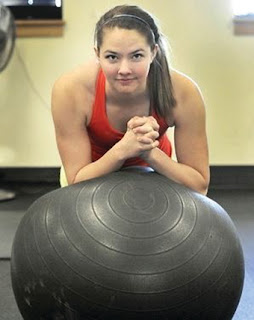 Hall is appreciative of the support of her parents who along with her older brother and an adopted 4-year-old brother who are there to cheer her on at every event. She is “crazy” motivated everyday about this sport which she started competing in eight years ago. At first it was hard to decide on her favorite event, eventually choosing the long jump to concentrate on, knowing she could do something with this. In her off time Kate enjoys playing the piano and spending time with her family. 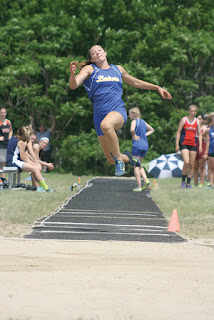 Her history-making jump puts her in a tie for ninth place in this year’s world rankings and tied for third among U.S. women along with Brittney Reese, the 2012 Olympic gold medalist and 5-time world champion.

Halls best outdoor mark going into the meet was 20’11” at the New England High School Championships where she jumped 20’ 11 ¼” to win the high school indoor national championship. “I skipped an entire foot. I was thinking tonight how years ago when I first went to nationals I saw people breaking national records. I never thought that it would be me,” said Hall. 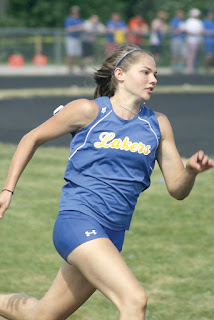 Hall with be attending Iowa State this fall on a full athletic scholarship where she plans to study Kinesiology (exercise science). Hall, who was home-schooled, was coached throughout high school by a South Portland trainer, Chris Pribish, who owns The Medically Oriented Gym. She ends her high school career with six New England titles, four New England records and two national meet records.

Throughout her high school career, Hall has continually raised the bar on her goals and performances and she has done this as a Type 1 diabetic with celiac disease, which means on a normal day she must check her blood-sugar levels five times, but during competition she might check it that many times in a few hours.

She said this jump was far beyond her expectations. “This is crazy to think I’m ninth in the world as a high school senior,” Hall said. If you would like to stop and congratulate Kate, drop by the Ice Cream Dugout in Windham and visit her where she is currently working before attending college this fall.

Posted by Michelle Libby at 5:13 PM