Basketball - the love of the game, no matter the age - By Stephanie Coffin 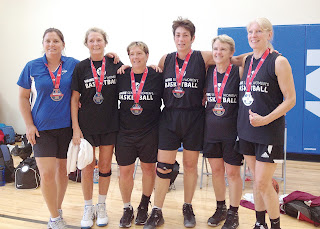 Maine Triple Threat has been playing together since 2008 and the current age range is 55-59. The team’s talent runs deep and is evident in their well-executed plays and fierce determination which pay off in consistent wins. The group practices two times a week with competitions that happen throughout the year.

Games are played on a 3x3 basketball half courts with one basket. The game starts with three players from each team on the court. There are two 15 minute halves, where there is running time until the last two minutes of each half. If the game is tied at end of regulation playing time then overtimes are played until one is ahead when the buzzer sounds.

If anyone is interested in joining a team or would like to inquire more about these teams feel free to stop in and attend a following practice: Team Pioneers (age 65+) practice Tuesdays from 4:30 p.m. to 7:30 p.m. at the Memorial Middle School in South Portland. All other practices are Wednesday from 4:30 p.m. to 7:30 p.m. at Memorial Middle School and Saturdays from 7:30 a.m. to 10:00 a.m. at Sullivan Gymnasium at the University of Southern Maine, Portland. You may also reach out to Deb Smith at N2Ldeb@yahoo.com and check out their Facebook page.

Posted by Michelle Libby at 9:53 AM