Girls Volleyball - gaining popularity all over Maine - By Stephanie Coffin


There appears to be a brightening future for volleyball in Maine. High school volleyball is picking up steam. The key will be getting players started at a younger age so a base can be created to support the high school efforts. 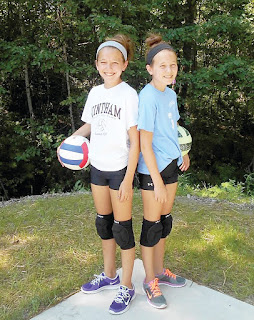 Volleyball is gaining in popularity really quickly in Maine. It seemed for a long time there was no interest among the state’s high schools. There hasn’t been a huge jump, but it has grown every year. Southern Maine sees the addition of a team or two a year. Most of the players in Maine are girls, but more boys are turning out, too, and some youth boy’s teams have been created. However, there are no boy’s high school teams in Maine.

Volleyball became a Maine Principals’ Association sanctioned-sport with one class in 1997. There were 12 teams in 2001. In 2005, teams were designated as East or West, with 10 in the East and 7 in the West. Currently, there are 23 high school programs statewide with 13 in Class A and 10 in Class B. Classes replaced East/West designation in 2010.


Volleyball is a sport with a lot of specialization. Some like to play just in the back row, some like the front row and some play every position. The rosters generally number 9 to 12 players with 12 being preferred.

William G. Morgan is the man to thank for the creation of this sport. The original name for the sport was "mintonette" but changed to "volleyball" rather quickly. And like the name being changed so did the rules of the game over the years. Volleyball remained solely an American sport for a few years until it began crossing oceans to become one of the most exciting and popular sports played all over the world.

After deciding that the net should be higher off the ground than that of a tennis court net, Morgan needed a ball that was larger than a tennis ball but lighter than a basketball and so therefore the volleyball was created of light leather that could be easily sent above the net with continued rapid play.

A little history behind the game:

In 1912 - the amount of players in a team was set at 6, which is the same as today. Also the rotation before serve was introduced.

In 1920 - the set and spike, which made the game more dynamic, was established in the Philippines. The history of beach volleyball really began and gained momentum in Santa Monica, CA. The first volleyball courts were put up on the beach and families came to play.

In 1984 - the U.S. won their 1st medals at the Olympics in Los Angeles. Men won the gold and women won the silver.

Chuck Fleck has been promoting the sport of volleyball for some time and it looks like it might be finally taking off here in Windham for future high school girls. Fleck has been coaching for the local travel club, the Maine Juniors (www.mainejuniors.org) and has kept statistics for the Windham High School team for the past two years. Fleck will also be the assistant coach at Saint Joseph’s College this fall season under the head coach Yami Nolan.

Volleyball has always been a favorite sport to Fleck who started playing while attending Ithaca College. Along with his wife, they played on a team in Maple Grove, Minn., where they previously lived. They would play three seasons out of the year and their team was the “C” league champs from 1997 to 2001. Fleck’s daughter Megan also plays volleyball and currently plays with the Maine JOs 14Gold team.

The volleyball season will run from September through October, practices will be after school Monday through Friday. Scrimmages will take place in the month of October as well as two multi program events hosted by Biddeford High School on October 18 and November 5.

Fleck stated “volleyball can be a lifelong sport and I hope this program is successful in keeping the interest growing in Maine. Volleyball is played year round, you just need to know where to look and we are trying to make the possible.”

Windham will have their first official Windham Youth Volleyball Association (WYVBA) season this fall! Information and sign-up night will be August 24th at the Windham Public Library , 217 Windham Center Road, from 5 p.m. to 7 p.m. in the big meeting room. Potential players and parents of sixth to eighth grade girls from any were in the area are encouraged to attend.
Posted by Michelle Libby at 11:08 AM