Last Saturday saw many fans come out to the Waterhouse Field in Biddeford as exiting seniors from many high schools played in the East versus the West 26th Annual Maine Shrine Lobster Bowl. Although the West won the game this year ending a two-game losing streak 45-21, the game itself is played for a wonderful cause. 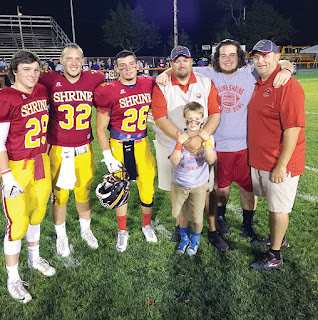 "As a coach this is a chance to coach the game you love and at the same time help a great cause. I've been lucky to play in the game (back in 1992) and coach in the bowl six times," said coach Perkins.
The players from each school are nominated by their coaches. The coaches can put their own names in to coach. The head coach is rotated by class each year. This year was Class C, next year will be Class D then to be followed by Class A starting the rotation again. Once the head coach is selected by the Maine Football Coaches Committee, the coach then selects his staff and then they select a team from the nominated players.

"Tanner, Matt, Zach and Morgan have been a huge part in the shift of the leadership change in Windham's program. They have been great players and role models for our program. They are excellent students, athletes, leaders and overall human beings. I consider each one of them a close friend," said Perkins.
When Perkins speaks of his assistant coach, Phil Rossetti, it is with admiration and respect. Through coaching, Phil and Matt have become best of friends. Perkins said that Rossetti has set the bar to what coaching should be. Developing young men and women is far more important than the x's and o's of a game. "Phil has been the rock in Windham's program." Perkins credited Rossetti for a lot of his coaching philosophy. “The character of the player is more important than the ability of the player!” Perkins added. He knows that Rossetti will be successful and the assistant principal at South Portland. However, he also knows he will be irreplaceable here in Windham.

This was Coach Rossetti's second time participating in the Lobster Bowl, his first was in 2007. This year was quite a bit different than his previous experience. Prepping for the Lobster Bowl starts in January and culminates with a game in July, with the ultimate goal raising money for the Shriners Children's Hospital.

"This time Coach Perkins called me a week before the Lobster Bowl camp started and asked if I wanted to fill in for a coach that was unable to make it. I was humbled to be asked and excited at the chance to coach Zach Davis, Matt Roy, and Tanner Laberge as well as work with Morgan Sawyer and Coach Perkins one last time," said Rossetti. "I really soaked in the experience knowing this may be my last football game. As we left the locker room to take the field it was pretty emotional and when the game ended although we didn't win it was a tremendous feeling competing one last time with some great athletes and coaches."
Photo by Melissa Perkins
Posted by Michelle Libby at 11:46 AM