The Windham Eagles football team met at the recently resurfaced Fitzpatrick stadium to face off again the Portland Bulldogs last Friday night. Both the Eagles and Bulldogs stepped onto the field with records of 2-0.

The Eagles appeared to control the ball the first half of the game with a field goal kick from Robert Innis putting three points on the clock. But just before the first half of the game came to a close Windham called a timeout with 1/10th of a second remaining on the clock, giving the Eagles one more shot at the end zone from the Bulldogs’ 33 yard line.

The Eagles lined up and quarterback Desmond Leslie threw the ball only to have it intercepted by Portland’s Bolduc at the 3-yard line. Bolduc took advantage of the stunned play and made his way to the end zone untouched. It was a stunning turn in the game after Portland committed three turnovers and let Windham control the clock throughout the first half. 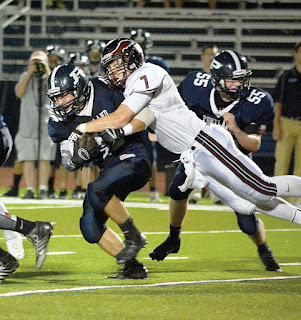 On the opening drive of the second half, Portland faced a fourth-and-six from the Windham 36-yard line in which Archambault dropped into punt formation but instead threw to Hunnewell for a 14-yard gain leading to a 41-yard field goal by Williams that provided the final margin of victory for the Bulldogs.

After the 97-yard run touch down and the field goal the Bulldogs pulled ahead by seven giving the team a more aggressive approach to the game. The Eagles couldn’t come back from the 15-yard loss due to unsportsmanship like conduct on the sideline and they ended the game with their first loss of the season. The Eagles continued to play right down to the last second of the game attempting a lateral push up field; however, the Bulldogs end up winning 10-7. 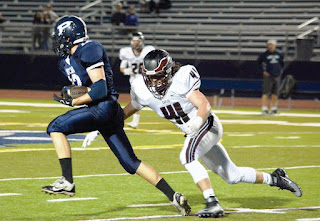 Posted by Michelle Libby at 4:37 PM