The Windham Eagles traveled to Auburn to face off against Edward Little’s Red Eddies last Friday night at Walton Field. Walton field is small in size and as a spectator you have the feeling of being on the field with the players. 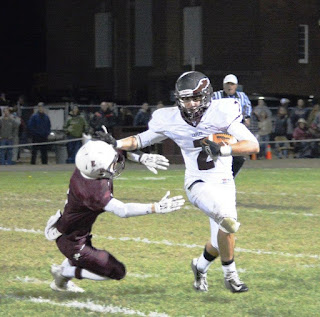 As the Eagles and the Eddies started the game you sensed both teams were ready to play the game of football. The Eagles (4-1) didn't make many mistakes and managed to play well despite a number of injuries currently on the team. The Eddies however couldn’t seem to come back after committing several errors during the game.

Edward Little despite having home field advantage seemed to make error after error. After Windham’s first touchdown the Eddies made a minor error fumbling the ball, however they recovered it and ended the first quarter of the game slightly down. 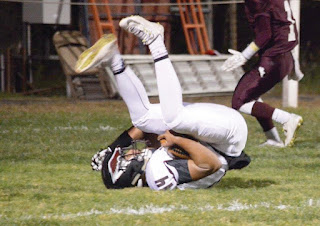 Edward Little (2-3) fumbled the ball three times in the first half and had one interception. The Eddies also had two blocked punts which were returned for touchdowns as Windham scored 35 points in the second quarter.

"It was great," Windham coach Matt Perkins said. "When you win that third phase of the game, the special teams, and have two blocked punts for touchdowns and you strip a ball on a kickoff, when you do that stuff, things are going well." 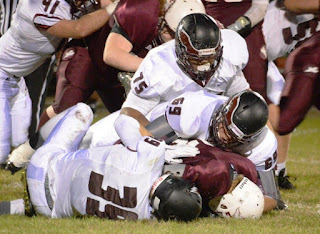 Junior back Cam Hoffses rushed for 172 yards on 20 carries and had a touchdown. Quarterback Desmond Leslie rushed for two touchdowns and threw for another. Windham finished with 251 yards rushing on 37 carries while throwing for 33 yards on two completions.

"When you can execute like that, the kids have really bought into special teams," Perkins said. "We make that a very big part of our week. Every game that we've won has had a lot to do with special teams."

The Eagles will travel this Friday to face the Bonny Eagle Scots, game time 7:00 p.m.