The Windham Eagles golf team enjoyed a successful regular season, with eyes now on the state tournament. Carrying a senior-heavy team, Coach Adam Manzo relied on co-captains Alex Spiller and Jack Blake to set the tone for Windham all season long. Spiller, who had a 39.3 average in matches, also beat the defending Girls State Champion, Hashilla Ravai, which was her only loss in the last two years. Ably backing up the captains were seniors Bryce Rolfe, Zack Hough, Connor Daigle and Tyler Johnson. They played in all ten matches, and five of the six shot sub-40 rounds in a match. 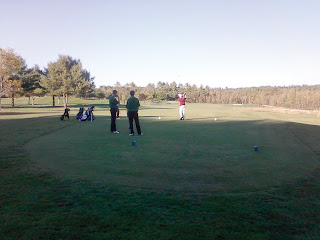 Last Monday the Eagles traveled to Vassalboro for the SMAA Team/Individual Qualifier, which was played on the Tomahawk Course at Natanis.

"We ended up shooting a 332, (keeping four of five scores from Spiller, Rolfe, Hough, Johnson and Blake), which was good enough for fifth best that day, earning us a spot in the Class A State Championship this Saturday, October 10, at the Tomahawk course. We were led Monday by Tyler Johnson, (holed out for eagle on the par 4 fifth hole), who shot an 80, and Zach Hough who shot an 81, (birdied his final two holes). Both Johnson and Hough also qualified to play in the SMAA Class A Individual Schoolboy Championships, which will be held on October 17, also on the Tomahawk course," said Manzo.


Windham's success during the regular season, and good showing at the qualifier have them poised to turn some heads at states. Coach Manzo has had this recipe brewing for a while now, and the program is delivering with great results. Manzo is in his sixth year of head coaching the team, seventh overall. 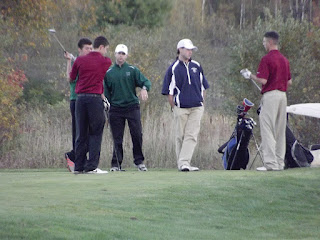 "This season was a culmination of four years worth of constant improvement. It was a season of firsts for our program. We started off the year with close to 30 kids signed up for golf. A number I never could have imagined four years ago when we only had around 12. It was the first time we finished the season with a winning record in six years. Finally, and most importantly, it marked the first time this team from this school qualified to play for a state championship. Our goal all season was to be good enough to qualify as a team, as well as send several kids off to individuals, (SMAA Qualifier), and we have been able to achieve that. Now we're starting to focus our attention on actually winning a state championship, something this group is certainly capable of doing. I could not be happier for these kids. They have really worked hard to make themselves and this team relevant," he said.

Posted by Michelle Libby at 9:01 PM