Starting with the girls team and Coach Charles Miller, who is in his 35th year of coaching organized soccer. With only three players returning from last year, Coach Miller knew he had a challenge in front of him. And at 2-4 so far, that inexperience is showing. 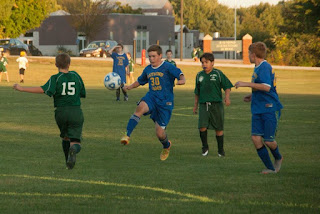 "At first we were not able to field a full team, but Mr. Fitch, (Jack Fitch, JSMS Athletic Director and teacher), really helped us out by adding some sixth graders and some players who had never played soccer before," Miller said. "We started out the season on a roll, but injuries of late, as well as lack of experience have taken their toll," he added. 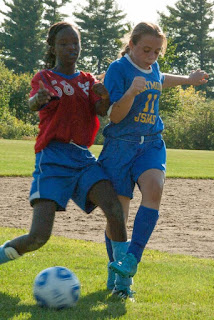 Some of those injuries include a concussion for star goalkeeper Riley Silvia, and a sprained ankle to eighth grade striker Carlee Desrochers. Silvia could be sidelined for another two weeks, but sixth grader Sadie Tirell has stepped up and shown no fear being in net in Silvia's absence. Coach Miller is really impressed with how the sixth graders have jumped right into the fire and have been able to perform.

"Ellie Miller, (sixth grader), is a good ball-handler and has great future potential. Another sixth grader, Lily Oldershaw has come right in to take over the defensive duties with no previous experience, and has done a fine job," said Miller. Eighth grader Ellie Wilson aptly holds down the midfield position with fellow eighth grader Leah Keeney. Keeney has punched in four goals on the year, while marking the best players on defense on the opposing teams as well. Desrochers has seven goals on the season, including five scored in the very first game. Each game out the girls improve, and Coach Miller is optimistic the rest of the season. "Most of the time we only have three or four subs, so they run out of steam, but I'm looking forward to the second half of the season, we're going to surprise people."

The boys team is just the opposite. Returning experience at every position, the boys have picked up right where they left off last year. Having depth at all eleven positions, the Roadrunners just keep coming at the teams with more players. The incoming seventh grade class is just like last year's, loaded with talent. The boys' record stands at 4-0-2, and they are in the midst of a 17-game unbeaten streak, going back to last season. Holding down the goalie position is eighth grader Jamie Louko, and he is as superb as you'll find in middle school soccer. 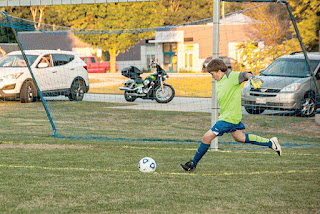 Pacing the offense is eighth grade striker Trenton Atherton with seven goals, including four in his last contest against St. John's. Right behind him is eighth grader and midfielder Lucas Pongratz, with four goals of his own, and four assists as well. Raymond is strong at the midfield position with seventh graders Nathan Plummer, Jayson Plummer, Fritz Van Winkle, and the Brooks' brothers, Alec and Keegan. They have been able to learn those duties from eighth graders Ben Childs, Cooper Elwell, Davis Kinney, Sam Hebert and Biaggio Cushman. The Roadrunners feature a fast-paced offense and suffocating defense, and are very exciting to watch. Raymond embarks on the second half of the season with the same mission in mind as the first half. 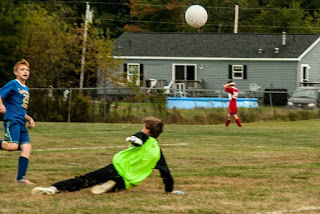 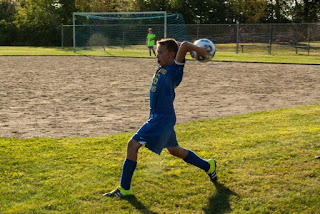 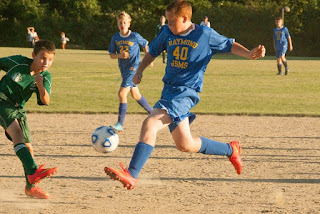 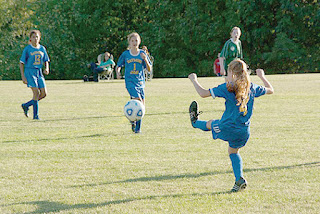 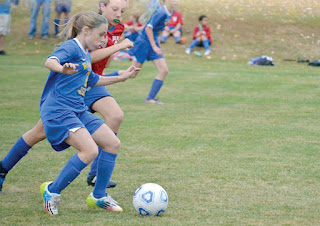 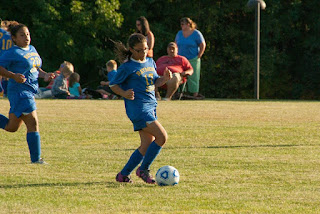