Everywhere you looked at Windham High school varsity field was lined with fans from both the home team, the Windham Eagles, and the visiting team from the Thornton Academy, the Trojans. It appeared to be standing room only, as the bleachers were full and the fence was lined shoulder to shoulder with fans. All these fans wanted to see what would happen when the Eagles faced off against the Trojans after last year’s championship game that ended with the Trojans taking the Class A title. 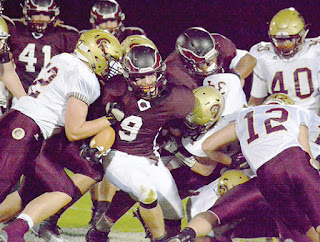 Thornton Academy was shut down in the first half of the game while Windham's running game hammered the defending Class A champions. Windham's Kyle Houser, Griffin Jacobson and quarterback Desmond Leslie had good yardage in the first half.

After coming off the Eagles only loss against Portland last week in which they were only able to score three points in the game, putting up 24 points in the first half alone was a sight to see. Thornton Academy was able to get on the board during the second half of the game, but it wasn't enough to help them. Everyone seemed to be looking at this game as a re-match of last year’s Class A state game; however, the difference this time was that the Eagles weren't about to let the outcome be the same. 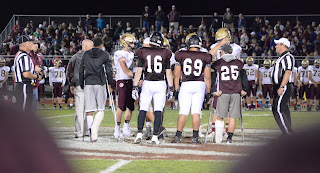 Windham (3-1) wasn’t expected to win this game because of the season-ending injuries of skilled players Dylan Koza and Eric Webb. Both Koza and Webb were in attendance with casts and crutches to help represent the Eagles and when the game started you could feel the excitement in the air.
The game was a fast paced one, the players on both sides hurrying to the line of scrimmage to see who would get the first points on the board. The Eagles made that happen as junior Kyle Houser gave the Eagles a 6-0 lead with 4:33 left in the first quarter when he scored on a 53-yard run. Houser appeared to be stopped soon after the line of scrimmage; however, he kept moving, pushing through the players and finding the openings. This play by Houser was Channel 13s play of the night and nominated for the play of the week. 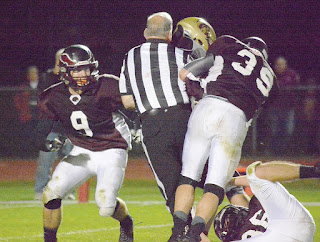 A Thornton fumble, recovered by lineman Gerry Valliere, set the Eagles up for their second score. Three plays later, quarterback Desmond Leslie bulled his way from 14 yards out to make it 14-0 after Robert Innis’ field goal kick. Innis’ 17-yard field goal made it 17-0 with 8:39 left in the first half. The momentum of the Eagles continued when Mitchell Eskilson intercepted a Thornton Academy pass from McCrum that in turn set up another Windham score before halftime. Griffin Jacobson took over eventually scoring from the 1-yard line.

Thornton Academy (3-1) was able to look like they came to play late in the third quarter. Quarterback McCrum started finding his receivers and passed to Ben Lambert for a 6-yard score. At the start of the fourth quarter, Windham was stopped on fourth down as the they set up to punt the ball Jacobson ran for 33-yards on a fake punt which brought the Eagles deep into Thornton Academy territory. After several more attempts by the Trojans to pass the ball down field and another interception by Blake Houser the game finally ended.

“We’re back, we’re back” the Windham players shouted after the postgame handshakes. “We needed to get back on track after last week,” said Jacobson. “We’re a good team.”

“To come back after last week’s loss and beat a team everyone is saying is the best in the state is a testament to our team’s heart,” said coach Matt Perkins. “I thought we shut down their running game for most of the game." “Everyone counted us out,” said Perkins to his team. “They said we were down.”

The Eagles will travel to Lewiston to face the Lewiston Blue Devils Friday night, October 2nd. 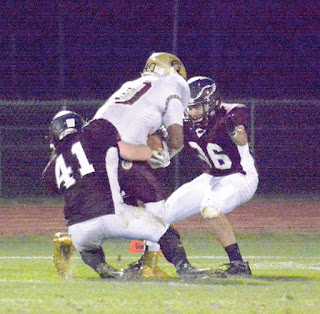 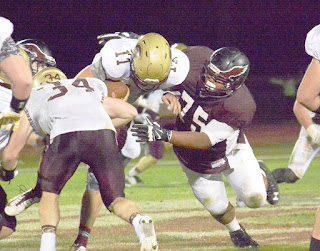