Windham High School hosted Cheverus High in the Class A North semifinal football game last Friday night. It was an unusually warm evening for November and the fans for both teams took advantage of that and packed the stands. As Windham was looking for a fourth win in a row against Cheverus and a win to move on in the playoffs, Cheverus was looking for a win, revenge and a chance to break their losing streak with the Eagles. 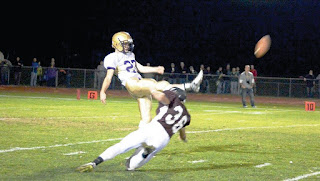 The Eagles came out strong; however, after a couple of nice drives down field the ball was fumbled and lost two times turning the ball over to the Stags. The Stags neglected to take advantage of these misplays and gave the Eagles the opportunity to continue their powerhouse drives. Windham dominated with their line and the game was a one-sided show for the most part.

Two of Cheverus’ regular season losses were handed to them by Windham, including a 19-15 decision two weeks ago when Windham had to rally to get back on top during that game. Coach Perkins, whose team had a playoff bye last week, stated, “We made some changes from last time and we just felt we were on top of everything.”

Windham totaled 59 plays for 381 yards – 356 on the ground while Cheverus only gained 74 yards on 38 plays. Senior Griffin Jacobson rushed for 123 yards on 17 carries. Cameron Hoffses gained 115 yards on 17 carries and Kyle Houser added 62 yards on 11 carries, while quarterback Desmond Leslie took off for 41 yards of his own.

“We had the three-headed monster going tonight, plus Dessie,” Perkins said. “It’s pretty tough with those four big boys coming downhill with that line.” 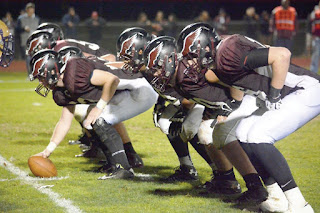 Windham was dominating, but the score was still 0-0 after the first quarter, then Cheverus made a major error with its one turnover of the game. A pass from Cheverus quarterback was deflected and sophomore Tanner Bernier grabbed the interception at the Stags 23-yard line. Windham ended up scoring five plays later on Kyle Houser’s 4-yard run. Senior Robert Inniss made his first of four extra points this game.
Windham’s line of Luke Forbush, Dederick Eastup, Tyrell Gullatt, Gerry Valliere and Thomas Sappier were strong all night and the Stags felt it. The Eagles scored on their final drive of the first half, going 66 yards in 3 minutes, topped off by Leslie’s 9-yard run, for a 14-0 halftime lead against Cheverus. This lead was just what the Eagles needed going into the second half of the game. 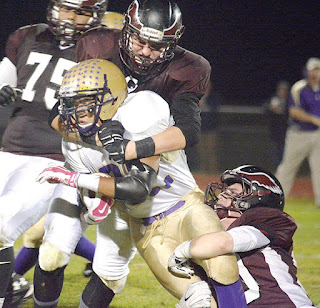 The Eagles dominated the second half of the game. While Cameron Hoffses and Kyle Houser scored in the second half bringing the score up 28-0, the Eagles defense was outstanding with Gullatt, Valliere and Sappier plugging up the middle. Both ends of Kyle Kilfoil and Griffin Jacobson, and linebacker Patrick Leavitt contained the outsized the Cheverus Stags offense.

Second-seeded Windham (7-2) advances to the North championship game next weekend against top-ranked Portland (9-0). Windham is going for a second straight regional title. The Eagles have to avenge a 10-3 loss against the Bulldogs from earlier this year.

“Looking forward to it,” Perkins said. The No. 3 Stags finished at 6-4. It is the first time since 2008 that Cheverus has not reached the regional final.

The Eagles next game is Friday night at Fitzpatrick Stadium against Portland at 7 p.m.