The Portland-Windham showdown was mentioned to be one of the matchups that could go to the wire.  Number two Windham (7-2) played number one Portland (9-0) at Fitzpatrick stadium last Friday night. 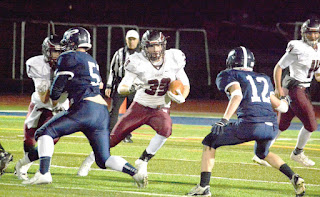 Portland edged out Windham 10-3 on September 18th during the regular season play when Bull Dogs Dylan Bolduc’s ran a 97-yard interception return with less than a second remaining in the first half which gave the Bulldogs a 7-3 lead. The Bulldogs added a 41-yard John Williams field goal in the third quarter.
Windham played in the regional final for a second straight year, which is noteworthy considering the Eagles’ rash of injuries this fall.  The rematch was predicted to be another defensive battle or the offenses would prevail. Anything can happen when these teams play one another.

Windham lost Dylan Koza, a running back/defensive back, for the season with a knee injury in the first game. Eric Webb, a wide receiver/defensive back, was lost at the end of the last Portland game. The Eagles have had other injuries but some of those players have returned to play.

Portland is led by Joe Esposito and George Chaison-Lapine, and Kyle Houser and Griffin Jacobson have been Windham’s top runners.

“It should be a good physical matchup,” said Windham coach Matt Perkins. 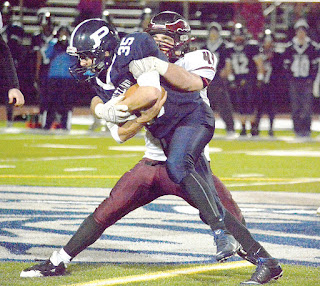 As Windham and Portland fans packed the stands on a very chilly night to watch which team would walk away the victors, the players themselves warmed up on the field.  Some of them realizing this could be their last high school game as they will be graduating in the spring, while others on the sidelines wished they could be in the game.

Field position seemed to be the biggest advantage in this game as both coaches agreed, that’s what made the outcome what it was.  “They were sticking us behind the line of scrimmage,” said coach Perkins, “I thought we had a little momentum in the first half but then they popped the big one.  It was all about field position in the second half.”

The Bulldogs took a 3-0 lead late in the first quarter.  But an interception by Kyle Houser, followed by a 23-yard run and three plays later, Cameron Hoffses scored Windham’s only touchdown.

The game then came down to one big play – an 80-yard run by Portland’s Joe Esposito halfway into the second quarter.  The same scenario that happened during the regular season game; one big play – changed the momentum of the game.

Portland led 10-7 at halftime, then scored on its first drive during the second half of game making the score 17-7.  Field position and a tough defense kept Portland in control the rest of the game.

“I’ve never been around a team that had to face so much adversity” said Perkins “I can’t say enough about our senior leadership.  Dylan Koza and Eric Webb were great helping the younger kids learn their roles.  We started four freshmen in tonight’s game.”

The Eagles may have ended their season, but what a season it ended up being.

Posted by Michelle Libby at 9:29 AM