In 2014, Windham ended Cheverus’ 36 game regular season winning streak (dating back to 2009) with a dominating 35-7 victory. Then to top the season off, Windham knocked off Cheverus in a spectacular overtime game ending in a 21-20 win with Windham claiming the Eastern Maine title. 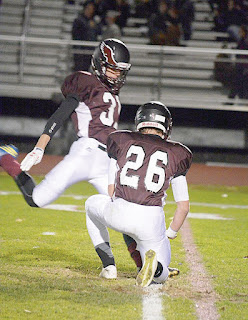 The Stags were looking for revenge last Friday night when Windham hosted Cheverus and the fans from both sides came out to watch. With the question hanging - was Windham able to defeat the Stags for the third game in a row or would Cheverus get their revenge?

It was a game of fumbles, turnovers, quarterback sacks and roughing the kicker penalties. The Eagles welcomed back junior Kyle Houser after a 3-game absence because of mononucleosis. With all the injuries impacting the Eagles this year, Kyle’s return to the field was a sight for sore eyes.

The first half of the game was quick on passing the ball back and forth and though each team scored and each team blocked the others field goal attempt the exciting part of this game came in the second half. The first half ended tied at 13-13. 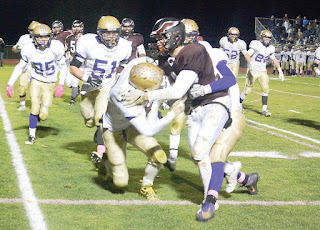 The third quarter brought little excitement until Cheverus was downed on the Windham 1-yard line off of a 65-yard punt and on the third down Cheverus’ Curran tackled Houser in the end zone for a safety, giving Cheverus a 15-13 lead. Ending the third quarter, Cheverus got the ball on the free kick, but then fumbled for an Eagles’ recovery by senior Patrick Leavitt. Windham then drove 81 yards in eight plays which expanded in to the fourth quarter. The Eagles were pushed back on a blocking-in-the-back penalty, but quarterback Leslie ran for 10 yards two plays later, Houser got a first down at the 5-yard line. Leslie scored on the next play to put Windham ahead. 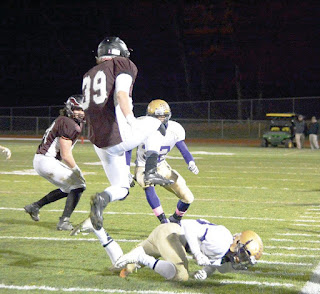 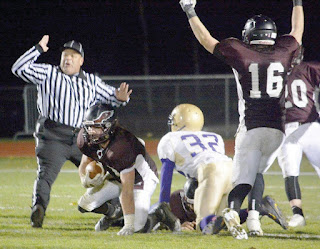 “That was a battle,” said Windham coach Matt Perkins. “We’re two physical teams. Cheverus has come a long way and they wanted it as much as we did. We’ve had some real good battles with them. “My guys have faced adversity with all the injuries. To battle through that and get to 6-2, I’m very proud of them.”
The Eagles (6-2) won the game 19-15. Windham secured the number two ranking in Class A North and will get a bye in next weekend’s quarterfinal round of the playoffs. Cheverus (5-3) was also playing for that bye spot, but four lost fumbles in the second half and a roughing-the-kicker penalty that allowed the Eagles to keep possession and run out the clock secured the Eagles win. 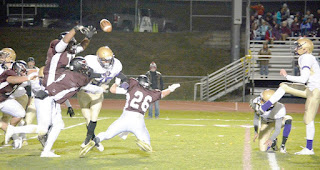