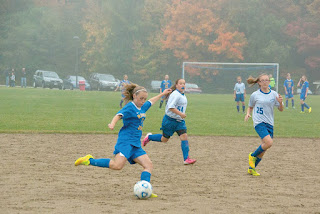 The Jordan-Small Middle School, (JSMS), girls and boys soccer teams both finished up the 2015 season in style here last Tuesday. Hosting Old Orchard Beach, (OOB), both teams each came away with a victory. In the girl's game, Carlee Desrochers scored a hat trick, punching three goals in on the afternoon, capping her season total at 20 goals. Desrochers scored 15 goals as a seventh grader last year. Eighth grade midfielder Leah Keeney also scored her sixth of the year, to go along with six assists, as they won 4-0 over OOB. 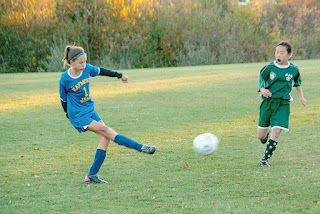 The girls finish the season at 6-6-1, overachieving in every facet of the game. Coach Charlie Miller was impressed after the game. "It was the best performance by them all year.” Miller had his challenges with this year's team, fielding many first year players as well as sixth graders to a seventh and eighth grade team. His 35-plus years of experience helped this year's club enjoy many levels of success.

On the boy’s side, and they also won in convincing fashion, 8-0 over OOB. Eighth grader Ben Childs recorded his first two goals of the season to put Raymond up 2-0, just four minutes into the game. Striker Trenton Atherton also netted two goals on the day, giving him 14 scores on the year. Seventh grader Alec Brooks put two in the back of the net as well, his second and third of the season, respectively. Rounding out the scoring was Cooper Elwell with his second goal this year, and Jamie Louko, who usually plays goalie, was able to get on the field and score his first middle school goal. 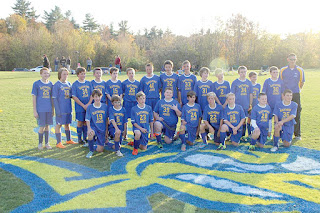 Louko and Brodie Driscoll combined in net to earn the shutout. Louko recorded eight shutouts on the year while in goal for Raymond. The Roadrunners finish their impressive season unbeaten, at 10-0-3. Even more impressive, this boys’ team is currently on a 24-game unbeaten streak, going back to last season. With talent and depth at every position, the boys were a formidable force this year. Both teams deserve great praise for the hard work they each put in for this 2015 campaign.