The Windham/Raymond Youth Field Hockey program enjoyed another successful season this year. Open to grades 4, 5 and 6, coaches and program creators Julie Wilson and Carrie Colby had 20 girls sign up for the team. The season consisted of four youth play dates or mini-tournaments, with as many as 10 teams per play date. The events were held in Scarborough, Cape Elizabeth and at the University of Southern Maine in Gorham.

Windham High School's JV and varsity teams hosted their very first Youth Play Date this year with over 10 teams participating. The JV and varsity players volunteered their time, and the Windham coaches along with Wilson were instrumental in organizing this event. 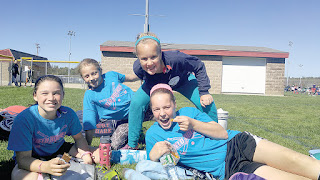 The players made huge improvements in stick skills, field positioning and overall game knowledge this year, the coaches said.

Wilson and Colby were very impressed by how far the girls have come in the program. "We could not have been more proud of the overall play of our girls. While the object of the play dates and scrimmages are designed to learn and have fun, our offensive players did score numerous goals, while the defensive side did a great job by not letting many in on our end," said Colby.

With the sport still new to Raymond girls, the program has really helped to develop the interest and skill level of each player the past couple seasons.

"Thanks to all the girls, and of course the parent's, friends and relatives for getting these players to the play dates and practices. They are the best field hockey fans around," added Colby.

Coach Wilson and coach Colby can't wait to do it all over again next year, and to see the older girls move on to the middle school team, while welcoming in a new class of beginners to the program.

Posted by Michelle Libby at 5:23 PM