It’s great to see our local school’s sports teams outfitted as a team. To watch the kids take the court, the field and/or the diamond uniformed in appearance brings a smile to a parent’s face. Being uniformed is more than just looking good though. It can make the kids feel good. A team that is newly formed can feel like a team just by appearances, it can make a team struggling to play well together feel like a team even if they may lose. To a kid, appearance is a source of pride and being uniformed with the other members of your team can make all the difference on their sense of team. So, when the Windham Youth Travel teams were given new matching sweatshirts the kids were excited to say the least. 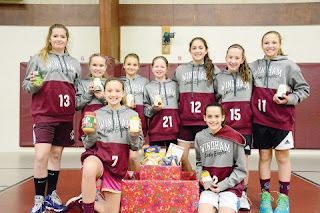 Coach Mike Flanders of the girl’s sixth grade travel team was pleased to have these sweatshirts given to his girls. However, Flanders wanted to ensure that the girls didn’t take this for granted. Coach Flanders wanted to instill the idea of ‘passing along’ this act of kindness. Thinking of how his team could ‘pass along’ the act of receiving these sweatshirts and taking in the season the girls brainstormed and decided to gather canned goods to give to the Windham Food Pantry.

“These 10 girls are amazing young ladies and sometimes what they do off the court is much more important than what they on the court,” said Flanders. “I’ve been telling them for the past two to three years of coaching them that the three most important things are…family, school and their teams/teammates, and in that order. Be respectful in everything they do and it will always come back around to them.” In this particular case, giving back to the community they live in was chosen as a group effort, which couldn’t have made their coaches and parents more proud.

All of these girls play multiple sports and are active in extra school activities. The team is having a great basketball season this year. The team is currently tied for second in the standings of their travel league with three games left before playoffs. The team finished third last year as fifth graders and Flanders is looking to best that position by the end of February this season. Keep your eyes and ears open for this group of athletic girls, you are likely to hear of them in the years ahead.

Posted by Michelle Libby at 4:13 PM