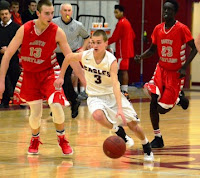 
Both teams played strong throughout the first half of the game and you could clearly see each team had the desire to win the game. First quarter ended with Windham ahead 17-15, second quarter showed the score 29-33 with South Portland taking the lead. The biggest gap in the game came in the third quarter with the Red Riots taking on a 10-point lead ending the quarter 45-55. Though the fourth quarter went to the Eagles, it wasn’t enough to pull ahead with the game ending South Portland 70 – Windham 63. 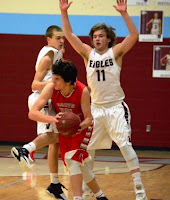 Nicholas Curtis led Windham with 27 points, including four 3-pointers, and was 11 of 13 at the foul line. Mike Gilman added 15 points along with Kyle Kilfoil and Hunter Coffin adding 6 points each, rounding up the score board were Chris Brown with 5, Josh Lacombe and Austin McGowan adding 2 each.

“Last night we could not catch a break. We did a great job of handling their interior size and athleticism throughout the game. The difference of the game was their bench contribution from players that had not gotten a lot of opportunities prior to our game. Those players made shots from the perimeter that we had scouted as the shots we wanted them to take. To their credit they made them when they counted. We had to pick our poison with South Portland and we had to live with the result that they made some outside shots,” said coach Chad Pulkkinen.

“Our guys did a great job fighting for a win, that I feel they deserved. South Portland’s size on paper would make one believe we would be destroyed on the glass and our ability to matching them 29 to 29 on the boards was a great victory for our guys and allowed us to really control the game. Some nights certain things happen that you do not expect, last night South Portland’s role players came up huge and helped them steal a win,” Pulkkinen added.

The remainder of the season for Windham is crucial. The team is fighting for a playoff spot which Bangor has now made very difficult with their big wins against single A Brewer and AA Oxford Hills over the last week time frame. The Eagles face a tough, improving Bonny Eagle team Friday, number one Thornton Academy Tuesday at Thornton and number two Gorham at home Thursday.

"We have a tough road but as our guys have proved all year we can play with anyone and we will be ready for the challenge at hand,” Pulkkinen added.
Posted by Michelle Libby at 2:00 AM