Eighth-grader Andrew Martin is the Aroma Joe’s athlete of the week. The 13-year-old Windham Middle School student plays soccer, track, hockey and wrestles. When he’s not competiting he enjoys video games and hanging out with friends. 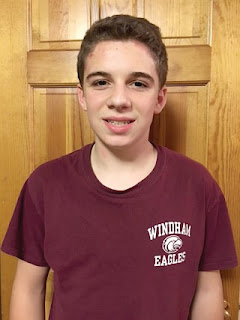 “Wrestling is a physically demanding sport but demands even more mental discipline. I have had the privilege of coaching Andrew in wrestling for the past three years and have watched him grow not only in his skill as a wrestler, but more importantly into a young man of character. I pride Andrew in his ability to win and lose with the same integrity, and focus on improving himself day by day. He is a joy to be around and I look forward to seeing him grow as an individual in the years to come,” said coach Nathan Johnson.

Balancing sports and school keeps Andrew on his toes. “You have to focus on school work first, sports second,” he said. “Teamwork motivates me not to think of myself first, but of my team instead,” he said about teamwork.

Andrew lives with his mom and dad Theresa and Jim Martin and his sister, Katie Martin.
He would like to wrestle for Ohio State or Penn State after he graduates from high school.
Posted by Michelle Libby at 1:09 PM