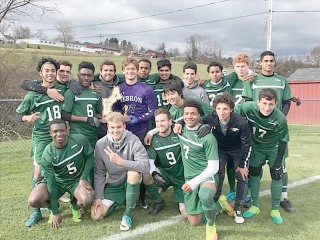 Hebron Academy beat Millbrook 8 - 1. Hebron has won this two years in a row. In the center (in purple) is Goalie, Keith Mank - a Junior from Raymond, ME. CONGRATULATIONS!

Posted by The Windham Eagle at 8:07 AM No comments:

The Eagles worked very hard all year and it came down to this: the State Championship against Scarborough. The game took place last Saturday at Fitzpatrick Field in Portland. This was a well-earned game for the Eagles who had worked vigorously all season to get there. The crowd was pumped from well before the game started to the very end, cheering Windham on.


Windham came out with intensity, ready to take on Scarborough. A fast touchdown from the Red Storm at the start of the game did not discourage the Eagles. Scarborough was pressuring Windham early as they added another touchdown to the scoreboard. With plenty of time left, the Eagles kept their heads up.

As the first half continued, Scarborough pressured Windham, scoring a couple more touchdowns. This only made fans cheer louder and players work even harder.

An intercepted pass thrown by Scarborough and caught by #89, Cameron Additon, showed the Eagles were working to turn this game around. Windham was giving it their all, but despite their efforts at the end of first half, Scarborough led 36-0.

This was not the start to the game Windham wanted, but they fought (and made it) this far and they weren’t giving up now. The Eagles worked fiercely both offensively and defensively. They had several great plays that had the potential to result in scoring opportunities, but were blocked by Scarborough. Tanner Bernier, #20, got the ball within 10 yards of Scarborough’s end zone. If Scarborough was going to win, they were going to work for it.

It’s tough to see the points rise on your opponent’s scoreboard, but Windham is a strong team. Despite this obstacle they did not let it get them down. Were they happy about it? No. But when that happens, you just work harder. And the Eagles did just that.

Scarborough didn’t let up though, scoring several more touchdowns in the second half. Windham fought hard and fought strong, giving it their all and leaving nothing on the field. In the end, Scarborough became Class A champs. Final score: 57-0.

“I think our guys played their hearts off, they have all year,” said Coach Matt Perkins. “Scarborough is one of the best high school football teams . . . they do a really good job; hats off to them. [They] represent Maine football very, very well.”

We’ll be watching when Windham returns next year to makes us proud once again.

Congrats to the Windham Eagles football team for a great season and being Class A North Champions and State Class A Runners Up!

Posted by The Windham Eagle at 8:03 AM No comments:

The varsity boys took on Portland last Friday for what was probably one of the coldest games I’ve ever been to. The temperature was below freezing with very strong winds. However, the low temperature wasn’t stopping the fans and players from giving it their all.

Shortly after the game started, I heard one player announce, “We came to play!” after Windham got off to a great start, almost scoring on Portland within seconds of the first half. The Eagles did come to play, and their intensity started from the first second and didn’t end until after the game was over.

Right out of the gate Windham scored touchdown number one of the first half. Tanner Bernier, #20, ran it into Portland’s end zone with #16, Liam McCusker, getting the field goal. From that point on, the Eagles did not let up on the Bulldogs until the end of the game.

Windham had strong offense and defense throughout both halves, keeping Portland from scoring for most of the game and putting the pressure on them by scoring touchdown after touchdown.

By the end of the first half, Windham had scored three more touchdowns. Treva Valliere, #34, ran the ball in and McCusker got the field goal. Bernier scored for a second time, running the ball in and passing it to #81, Matty Babb, who got the two-point conversion.

The cold, which hadn’t gotten much better, didn’t affect the Eagles’ enthusiasm as they began the second half with just as much force as the first. They continued to show Portland, this game belonged to the Eagles. Windham’s excellent teamwork resulted in two more touchdowns before the final whistle. Watson ran the ball in for his second touchdown, but the kick was no good. #21, Stuart Salom, ran the ball in and McCusker got the field goal. The final score: 42-6, Windham.

Coach Matt Perkins spoke about the team and their season, “The heart of the [se] guys . . . how they battled adversity all year has just been so impressive. I’m very, very proud . . .  [of] the coaches [and] the players . . . and the passion has just been through the roof.”

After the game, Athletic Director, Rich Drummond presented the team with a plaque for being the Class A Northern Regional Champions. 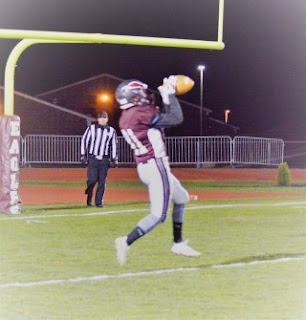 Posted by The Windham Eagle at 8:47 AM No comments: