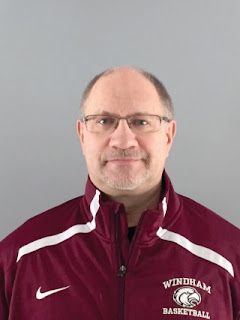 Peter Brown has been an assistant varsity boys’ basketball coach for the Windham High School since 2007 but his coaching career began a total of 20 years ago.


He became a volunteer assistant coach for the eighth-grade boys team at Lincoln Middle School
while living in Portland from 1991 to 2002. When Brown moved to Windham in 2007 he continued to be a volunteer coach in Portland. He asked the Windham basketball coach at that time, if he needed help because he thought it was better to be involved in the community he lived in.

Brown started coaching youth sports because he enjoys working with kids and loves basketball. Brown says he’s been fortunate to meet some fantastic student athletes who have gone on to become successful young men.

Brown and the other coaches want their athletes to learn the value of being part of team. School work has its importance and comes first, but learning to have your teammates’ back and realizing that everyone on the team has a purpose is vital to the goals Brown and his coaches strive to achieve.

The lesson he’d like his athletes to learn is no matter what you do, in school, relationships, work, or whatever you do - you get what you put in.

Brown says a successful season comes down to players and coaches working together towards a common goal; this includes on and off the court. Obviously, everyone wants to win, but if they as coaches, can get their kids to work together and be the best student athletes they can be, as well as be a better team at the end of the season than at the beginning; they will have succeeded as a team.

Brown is a graduate of Bangor High and received his bachelor's degree from Husson College in Personnel Management. He has been a business manager for a food broker, AJ Letizio Sales & Marketing, for over 30 years. Brown is married with two sons, Chris who played for the varsity Eagles basketball when he was in high school and Cameron, who played for the varsity Eagles basketball this past season.

Brown enjoys spending time with his family and playing golf.

Posted by The Windham Eagle at 6:45 AM