The girls’ softball team started their season off with a bang, or rather a crack of the bat. Their home opener took place Saturday, April 21, against Westbrook at Saint Joseph’s College in Standish. The game was played at Saint Joe’s because the home field at Windham High School is not ready to host games.


After a somewhat rocky start in which the girls gave up four runs in the top of the first inning, the team quickly found their groove to come back from behind and show Westbrook they meant business.

In the bottom of the first, #4 Lauren Talbot got a base hit and steals a base. Then #6 Megan Joy got a base hit to bring in Talbot. Score was at 1-4, Westbrook. An unsuccessful attempt for Joy at stealing a base brings in #2 Alexandra Morang. The score was 2-4, Westbrook after one inning.

Windham had great hustle on the field; playing great offense and defense.

Talbot got another base hit in the bottom of the third and stole a base. Chloe Wilcox, #22, got a hit and Talbot scored, 3-4 Westbrook after three innings.

The Lady Eagles excellent teamwork and communication enabled them to get it done on the field.
After #15 Kayla Gorman’s bunt brought in #8 Jessica Meyer, the game was all tied up at 4 in the bottom of the fourth.

The Eagles got a sweet double play from second base, #9 Taylah Piazza to first base, Chloe Wilcox in the top of the fifth inning to show Westbrook they came to get that ‘W.’

In the bottom of the fifth, Morang hit a double and then Joy brought Morang in to score, 5-4, Windham.

Windham kept up their solid defense, ending innings leaving Westbrook players on base, which prevented them from scoring.

#24 Erin Elder got a triple off of a bunt in the bottom of the sixth inning.

The pitcher, #7 Whitney Wilson closed the game by bringing up four Westbrook players and striking out three; final score 5-4 Windham.

“After that first inning . . . they played pretty well. We start with a W[in] . . . and by the end of the year we hope to have everything moving in the right direction,” Remarked Coach Travis Demmons.
Posted by The Windham Eagle at 10:45 AM No comments:

The girls’ softball team did not have your traditional preseason this year. They travelled to Orlando, Florida for six days during April vacation for Disney Spring Training. The team and their coach, Travis Demmons, go down every other year. 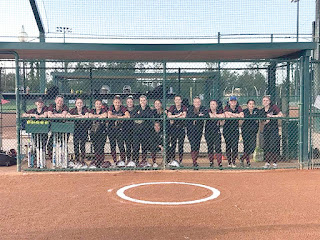 All preseason games were played on the ESPN Wide World of Sports softball fields at Walt Disney World. The team did great in their preseason games as they played eight games total and beat Medomak Valley, ME; Westerly, RI; St. Paul’s, CT and Simsbury, CT. They split winnings with Skowhegan, ME and East Haven, CT, meaning they played each team twice and won a game and lost a game to each team.

Coach Demmons said one of his favorite parts was on the field. He enjoyed seeing his team gel into a cohesive unit and seeing everyone come from behind to win.

When they weren’t on the fields they were visiting the University of Florida to watch the Gators play the South Carolina Gamecocks in Southeastern Conference (SEC) softball. They also hung out as a team with families visiting the theme parks and just relaxed.

This was their second trip down. “This trip the girls were even more successful on the diamond and just as well behaved,” remarked Demmons. “The camaraderie the girls developed and how it happened so organically with no forcing from coaches or parents was great.”

The girls loved playing at Disney and in the warmer climate. Their first practice back in Maine was a bit of a shock to the system, but the girls handled it well.

Congratulations to the girls’ softball team on their preseason victories and we look forward to a great season!

Their next game is Monday, April 30 at Cheverus High School in Portland at 4 p.m. and their next home game is Wednesday, May 2 at 4 p.m.

Posted by The Windham Eagle at 10:34 AM No comments:

Boys’ tennis off to a great start by Matt Pascarella

The boys’ tennis team began their season with an outstanding performance at their first match of the season. They played Massabesic for their first home game this passed Tuesday, April 23.


The match was broken into singles and doubles. Each individual match is best of three games and the entire competition is best of five of all the matches played.

Due to a lack of players on Massabesic’s team, they forfeited one of the doubles matches. So, Windham was up 1-0 early on.

In the doubles matches, Andrew Wing partnered with Ben White and they won two of the three matches they needed to win. Their scores were 6-1 and 6-1. The other match was forfeited due to Massabesic’s lack of players.

Windham came out to win 5-0 in this match because of the three singles wins and two doubles wins.
While watching the student athletes in both the singles and the doubles matches, I noticed one thing all the Windham athletes had in common: intensity. The Eagles had speed and agility on the court showing Massebesic they were energized for the win (or wins).

The Eagle’s forceful serves and return volleys capitalized on showing their opponent they were here for the ‘W.’ Windham athletes are concentrated and determined to do their best during these matches.

“This was a great was to start off; to get a good win and hopefully we’ll keep it going,”
commented Coach Gary Stone regarding the match.

Posted by The Windham Eagle at 10:26 AM No comments: