Slot car racing is a favored pastime for many 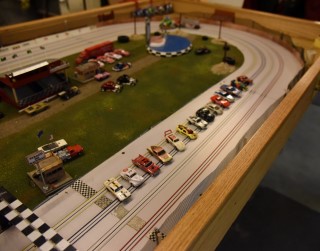 Hank Gagnon first got interested in slot car racing when he was 17 or 18. While he did stop racing for a short time, he got back into it when his stepson, Jesse Jordan, became interested in racing slot cars. Jordan’s friend brought him to a slot car track to see what it was about, and Jesse bought two slot cars and he and Gagnon started racing after that. “When I got back into it, we got into it pretty heavy,” Gagnon said.

Briefly, slot car racing the racing of powered miniature autos that are guided by grooves or slots in the track on which they run.

“I like the cars and I like the racing; it takes quite a bit of practice to get good at,” replied Jordan.
Gagnon is the owner of Rev It Up Raceway and Black Bear Auto Care, both located in Windham.

Roughly three years ago, Gagnon bought a couple slot car tracks, and designed an oval shaped track called the ‘Maine Monster Mile’ which, end to end is 24 feet long. Gagnon races 1/24 scale slot cars. He has been doing weekly races for seven to eight years. Some cars can reach the speeds of 15 to 20-plus miles per hour.

Gagnon races with other slot car enthusiasts every week where ten to 20 people bring their wooden compartment cases that hold their various slot cars, along with supplies and the necessary tools to do any repairs. Slot car aficionados travel from all over the state to race on Gagnon’s track including the towns of Poland, Auburn, Brunswick and Greene; “There was even one guy who came up from Massachusetts,” Gagnon said.

Casco resident Butch Belanger described how he got interested in slot car racing. “My dad raced in the late ‘60s, early ‘70s in Westbrook. We got into it 20 years ago when the track opened down here.

We then got out of it. When I went to work for NAPA Auto Parts I met up with Hank and he kept trying to get me to come race. I finally showed up and I’ve been here ever since. It’s been almost four years. What keeps me coming back is the enjoyment of going around in a circle having fun and an inexpensive good time.”

George Allen discovered slot cars at the Auburn Mall. “I was racing real cars and I was going to start racing remote controlled cars and I walking into the Auburn Mall and saw a slot car track. I said, ‘I got to check this out,’ so we went down to the Auburn Mall on a Wednesday night and the rest is history. Me and my boy, we’ve been racing ever since – met all these great people...it’s a lot of fun.”
Allen started the Minot Mountain Speedway after buying some track from a guy in Massachusetts. “My garage is my track and these guys all come to my house and...it’s a blast.”

On the smaller side of slot car racing, Windham resident Jim Hoar started the Maine HO Slot Car Racing Club in 1999. HO scale is 1/64 which is the size of a matchbox. Hoar enjoys the comradery of the sport and likes getting new racers involved.

He describes his club as an ‘eating club with a racing problem’ “When we take a portable track out to car shows in Portland or Bonny Eagle, people will say ‘I used to do that when I was a kid.’ Now their kids come and play on our track and they say, ‘hey mister, this is better than video games.’”

Hoar has two large tracks and a dragstrip, the only dragstrip in Maine, for racing HO slot cars, in his basement. Participants come from all around New England, and a lot of the club members, donate their time and energy; members like Mario Bosse who donated Poland Spring water to the club as well as was willing to offer any help.

HO racer, Brian Valle described racing as ‘therapeutic.’ It’s a five to six hour escape, where every month the club does a race with roughly 12 to 22 people. When people of all ages see the tracks, it brings out the kid in them. A lot of the guys involved in HO racing, are to some degree former car guys or ex car racers. “From the community standpoint, we would love to see anybody that just enjoys this as their hobby; that they remember what it was years ago...they can get in touch with us, and we’ll help them,” added Hoar.

Anyone interested in learning more or joining the HO club can contact Jim Hoar at 894-5289 or mainehoracing@hotmail.com. You can also join their Facebook page: Maine HO Slot Car Racing Club.

Anyone interested in learning more or racing the 1/24 or ‘O’ scale slot cars can join the Rev It Up Raceway group on Facebook and contact Hank Gagnon through that page.