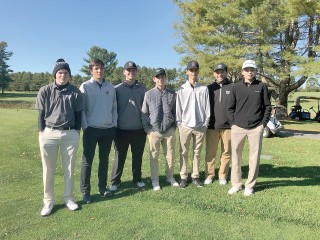 After finishing second out of 18 teams at the 8-hole golf Qualifier played at Natanis Golf Course, a par 72, in Vassalboro on Monday, September 30th, the Windham High School golf team qualified to play in the SMAA Team Championship on Saturday, October 5th.  Evan Glicos, Drew Mathieu, and Ryan Sargent also qualified to play in the SMAA Individual Championship on October 12th.

“After missing out on team states two years ago by five strokes and last year by one stroke, this was a highly successful season for Windham golf,” said Coach Adam Manzo. “We were selected as a preseason team to watch and we certainly lived up to those expectations. I am incredibly happy for these kids that they got to experience playing in a team state championship.  They have put in a lot of work over the past four seasons and to be rewarded for their efforts is pretty awesome.”
Posted by Kelly at 1:37 PM