Tails from the Outdoors: The Indestructable Duck

Some years ago I was assigned to the Pentagon but lived in northern Virginia. I had a friend that lived in Ladysmith down about in the middle of Virginia if you took I-95 south. He had access to a U.S Army Fort called A.P. Hill. The fort was a sprawling installation of several thousand acres of training areas and ranges where mostly Reserves went to train before shipping out overseas. Areas that were not “hot” with training activities could be hunted if you took the right safety courses and had the right passes.

One year at the start of duck season my friend asked if I would be interested in coming down for a few days of duck hunting. Duck season was kicked off with wood duck hunting because as it got colder, they were one of the first species to migrate further south. I was excited to do that so as the weekend approached, I got a kitchen pass, a day off from work, and a reservation at one of the vacant Bachelor Officers’ Quarters, or BOQs, for transient personal and headed south. 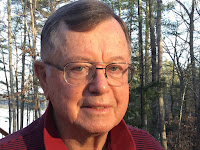 The area he had permission to hunt was a narrow valley that had a permanent creek running through it to a small pond where the woodies loved to congregate as they fed on acorns dropped from the ridgeline oak trees. The set up sounded perfect. We would enter the valley via the stream and work our way toward the pond. When the woodies left for the morning to feed in grain fields they were just as likely to follow the stream on their way out and we would have been in excellent position for some pass shooting.

Unfortunately, my buddy had not done any recent scouting, relying on his memory of the terrain from past years. When we got there the creek had grown over quite a bit and the foliage on both sides was over our heads. No problem we thought as we bushwhacked our way towards the pond. This took longer than expected and legal shooting arrived before we were halfway there. The ducks flew as we had predicted but we could only see a few degrees either side of the creek centerline. We could hear them passing us by but couldn’t see them. Finally, a flight came right down the creek and I managed to drop one just behind me. We searched for an hour looking for that duck but the most we could find were a few errant feathers. By that time the morning flight was over and we left the area for some deer hunting.

Ducks will often return to a sanctuary or safe haven toward the end of the day so we planned to be back at the creek with plenty of daylight left. We were walking in on the creek but the grass around us was so high we could not see below our knees and just shuffled our waders along feeling for the creek bottom. We hadn’t gone very far when I stepped on something that wiggled under my boot. This was cottonmouth and rattlesnake country, so I was not eager to put my hands down and grab whatever was under my boot. Finally, I was able to clear away enough of the grass to see that it was the duck I had dropped that morning. I did the usual practice of ringing its neck, put him in my vest pouch, and finished the evening hunt. When we got to the truck, I put him in the back with the rest of the gear and we drove to the BOQ. When we got to the Q, I opened the back of the truck and there was the duck
sitting upright staring back at me. I rang its neck again but did not want to disturb too many feathers as it was a beautiful bird and I wanted to have it mounted. While we cleaned up for going out to dinner, I put the duck in the freezer compartment of the refrigerator for safe keeping.

When we returned some hours later, I opened the freezer to check on my prize and lo and behold, there he was again eyes wide open and upright. However, by now he had lost control of his bowels and the inside of the freezer compartment was wall-to-wall duck poop. Can’t tell you what a mess that was to clean up. We had to defrost the entire refrigerator. I then pithed his brain with a nail we found, a technique we learned on a frog in biology class, and that did it.

I had that woodie mounted and every time I look at him in my bar I am reminded of that experience. <