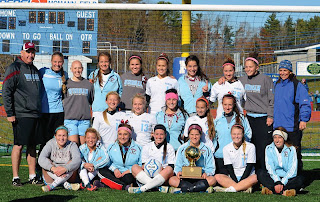 Loaded with talent on both sides of the ball, Windham’s coach Deb Lebel and her girls varsity soccer program completed the magic carpet ride during the 2013 season. And the awards keep coming, this time for Lebel, who was selected as the National Soccer Coaches Association of America, (NSCAA), Maine "large school" coach of the year, (COY) The honor now puts coach Lebel on a New England ballot, for New England COY. If she is selected as New England COY, she will vault to the National ballot.


With the team going 13-0-1 in the regular season, and scoring 92 goals while only allowing in eight, Windham didn't have a smooth playoff road ahead. The girls responded by battling through some tough teams from Gorham, Scarborough and Thornton Academy to face Bangor in the State championship.

"We did not have an easy tournament draw, but the team accepted this challenge and took it one game at a time," Lebel said. They dominated the final game 3-0 and brought the title back to Windham for the first time in 19 years. "They ended up achieving their ultimate season goal by winning the state title," said Lebel. "The girls sacrificed a great deal in the fall to make this happen."


The Lady Eagles put five players on the SMAA first team, Jenna Soucy, Ciera Berthiaume, Cassie Symonds, Jordan Sargent and Emily Gilman, with Soucy, Symonds, Sargent and Gilman making All-State as well. Soucy, who scored 23 goals, (most of any class A school player), and dished out nine assists, made the All New England Team. Goalie Katie Kneeland finished with 65 saves and an astonishing 14 shut outs credited to her and the Windham defense. 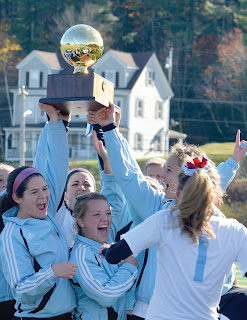 "The girls were extremely proud to represent their school, community, family and fans in a professional, sportsmanlike manner," said Lebel. Giving all the credit to her team, Lebel is already excited for next year, adding, "With the amount of talent returning, we are hopeful it won’t take as long to repeat this accomplishment."
Posted by Michelle Libby at 11:24 AM