Jenny Wood graduated from Windham High School last spring and has now found a home at the University of Maine at Machias on its women’s soccer team. Its nationally ranked women’s soccer team. This season the Division III Clippers were undefeated in their conference.
Wood, a centerback defenseman starter, is playing on an athletic scholarship.
“The physicality is a lot different (from high school). I’ve never been so beat up in a season before,” she said. “The ball moves a lot faster.”

When she went to Machias, she went there with a small group of soccer players who played on the same local club team she did. They’ve become like a family, Woods said. “The adjustment has been a lot better than I thought it would go,” she added. 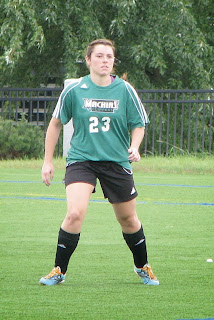 She has spent the fall traveling to games often playing Friday, Saturday, Sunday and Monday in a row before having a day off. “We were on the road a lot,” she said. The furthest away she had to travel was for their national tournament game in West Virginia. The team was fourth in the nation and ranked seventh on power points when the team arrived at the national tournament. However, they lost their first game in penalty kicks to Penn State College. The second game they played they won 5 to 0 against Paul Smith’s College. “We came out really strong,” Wood said. 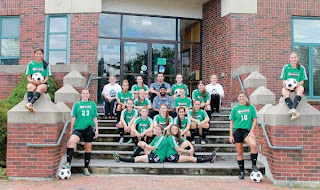 “A lot of people under estimate Machias because they say it’s in the middle of nowhere.  There are a lot of nice people here. You forget that it’s a small town because you’re so busy with sports. We want you to come up here. I love it up here,” Wood said.

Soccer is now over for the season, but Wood is looking forward to winter pickup games and then spring practices and tournaments. 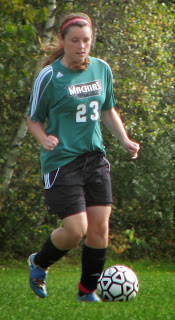