Athlete of the week - Ben MacDonald 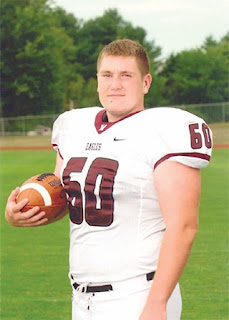 The Aroma Joes Athlete of the week is 17-year-old, senior Ben MacDonald, who is on the Windham High School football team. He also plays baseball. Ben’s hobbies are snowmobiling and weightlifting.

“I think playing sports teaches kids to be mentally tough and to not get down on themselves,” he said. “I have learned to never give up and to try my hardest all the time.”

The person who has been most influential in his sports career is his father. “For always bringing me to where I needed to go, no matter what he was doing,” Ben said.

He would like to go to college to become an electrical lineman.

Ben is the son of Kevin and Caj MacDonald, has a sister Lindsey and a dog, Cooper.
Posted by Michelle Libby at 2:00 AM