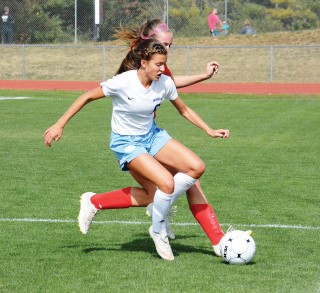 On Saturday the Lady Eagles hosted the Sanford Spartans on a beautiful fall day in what proved to be an edge of your seat game. Both teams came out strong and aggressive, wanting the win as badly as the other team.

Through teamwork, strong and quick passes up field the Lady Eagles kept the ball away from their goalie Kaitlyn Roberts. Roberts stepped up and saved multiple shots on goal while throwing her body onto the ball and into the players if needed to defend the net. 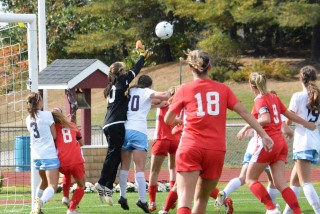 Early in the second half sophomore Meghan Hoffses is able to drive a ball into the Spartans net which would untimely be the only score of the game. Between the effort of making this goal happen and the physicality of the game itself this one goal was enough to pump the Lady Eagles to hold strong the rest of the game. Lady Eagles won 1-0.
Posted by Michelle Libby at 2:00 AM