On Tuesday the 6th seeded Windham Eagles varsity girls soccer team (10-2-3) faced off against the 11th seed Thornton Academy Trojans (8-7) in a preliminary game. A dominating performance of good defense and aggressive offense led to a convincing 4-1 victory.

The Eagles faced the Trojans earlier this year on their home turf and walked away with a 2-0 victory. 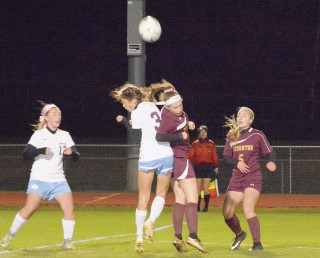 That doesn’t always guarantee a win.  It is also about remaining healthy and focused. “We’ve been prepared and working hard,” explained head coach Deb Lebel. “Unfortunately we lost Sarah Barrett on defense to a torn ACL against Gorham so we’ve had to adjust. I still think our chances tonight are pretty good. We’re pretty evenly matched. We’ll be fine,” she continued.

The first half the Eagles kept the Trojans defense on their toes and the goalie very busy. With 4:30 remaining in the first half Eagles Lindsay Arsenault scored the first goal. Aggressive play and determination led to a second goal by midfielder Hannah Kaplan with 2:53 left. With the score 2-0 Eagles, the half would come to a close. 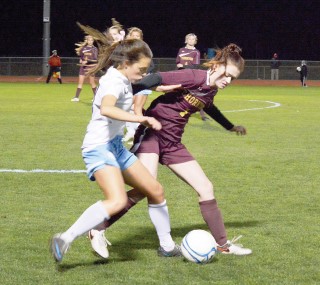 In the second half, Eagles Hannah Kaplan would score her second goal of the night. With the score now 3-0 and time on the side of the Eagles the lead appeared insurmountable. The Trojans would eventually break through the seemingly impregnable Eagle defense and goalie Kaitlyn Roberts with 8:50 left in the game on a score by Trojan Hannah Niles cutting the lead 3-1.

However, three minutes later Eagles Maggie Symonds would sneak one passed Trojan goalie Abigail Cook who was kept busy all night with 19 total saves. The lead was 4-1 and that is how the game would end. 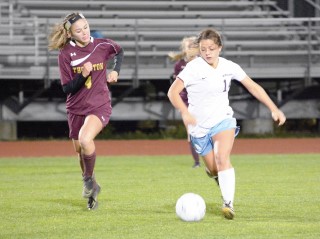 After the victory Lebel kept it short and sweet to her players, “All right ladies, great game, and way to finish.” Maintaining the energy level takes motivation. “They wanted this tonight.” This is the first time in a few years that the Eagles have not been on a bye. “They didn’t want to go home. They were definitely hungry. I love their enthusiasm.  The defense played smart and worked well together.” Like football, soccer is a game of strategy. “With the wind as a factor tonight, we chose to have the wind at our back during the second half,” continued Lebel.

Up next is the quarterfinal against Cheverus, who they played on September 21st and had to rally in order to secure a tie.
Posted by Michelle Libby at 2:00 AM