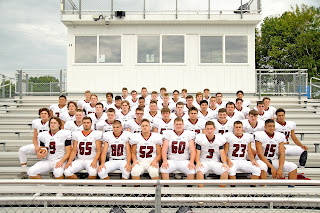 It was two years ago that Perkins established a leadership council composed of 12 players, including underclassmen, to discuss issues and concerns among players. The council, Perkins said, allows players to have a voice and police themselves. Apparently this move is beginning to show benefits.
Head coach Matt Perkins led his team into another season on the winning side. While they may have lost 27-14 a week ago in the semi-final of the Class A championships to the Portland Bulldogs and for the second year in a row, he does walk away with a young team that is sure to show promise and improvement next year. And although they took a loss, it was a big improvement compared to the loss suffered earlier in the year when the Eagles fell 42-21 to the same team.

The Eagles ended up 6-4 having scored 213 total points while giving up 163 and rank 21st in the state. Although 163 points sounds like a lot this is not a true testament to the young talent. The good majority of those points were scored earlier in the season and the performance in last two games before the semi-final against Chevrus was a sure indication of what is to come.

Next season should see the return of 35 players in the current roster of 45 players. The majority of those will be either sophomores or juniors.

Perkins has been the head coach of the Eagles since 2004 with a won-loss record of 75-53 and it doesn’t appear that his tenure will end any time soon.
Posted by Michelle Libby at 12:44 PM