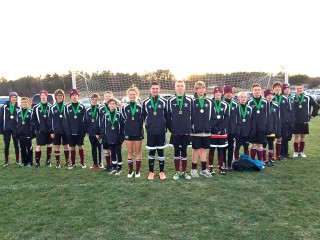 The Windham U14 Soccer team playing for the Windham Youth Soccer Association finished their final travel season games by winning the New England Invitational championship in Pembroke, NH, over the weekend.  In the first game of the New England Invitational, Windham won 1-0 versus John Stark United U14 (Henniker, NH) with the lone score coming from Simon Gabaree assisted by Hayden Bilodeau with Ryan Abbotoni in net stopping three shots for his fifth shutout of the season.


The second match featured a physical game versus Portsmouth YSA U14 (Portsmouth, RI) with Windham winning 2-0.  Cam Joyce opened the scoring unassisted from 25 yards out in the first half with Hayden Bilodeau adding another in the second half with Sean Cunniffe aiding with the assist.  A late penalty kick miss that hit the crossbar by Rhode Island maintained the shutout by goalkeeper Simon Gabaree, who stopped four shots on goal (Gabaree's ninth shutout of the season).

In the final match, Windham faced NHSL Fall League Div 1 Champion Portsmouth City (Portsmouth, NH).  In the first half Windham got the offense going early with Ethan Wert putting in the first goal in the fourth minute off a pass from Hayden Bilodeau. Shortly after, Julia McKenna added Windham's second goal unassisted, in the sixth minute, with a low driving shot from the left wing which quickly went to the back of the net past the NH keeper.  Early in the second half Hayden Bilodeau connected off a pass from Griffin Black for the third Windham goal.  Portsmouth was able to garner a single goal off a corner kick in the second half.  Simon Gabaree and Hunter Vail combined for the 3-1 win, stopping five shots.