The Windham U14 Soccer team playing for the Windham Youth Soccer Association captured the Soccer Maine Fall Classic League state championship for the Boys U14 division over the weekend. The team going into playoffs as the number two seed overall came out of the preliminary round a week earlier with a 2-0-1 record including a 3-0 win over Maranacook to secure a spot in the semifinal round. 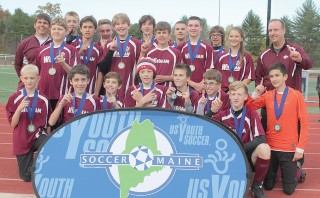 In the semifinal game versus Falmouth, the offense had to work hard to get a score past the Falmouth goalie who stopped 12 shots overall. The lone score came in the 50th minute when Julia McKenna worked the ball from the corner past two Falmouth defenders and crossed it just outside the goal area.

Dylan Gorman and Hayden Bilodeau had multiple attempts that were blocked and in the final attempt it was Bilodeau who finished the goal with Gorman assisting. The team exhibited strong defense to stop the Falmouth attack back-dropped by goalie Simon Gabaree, a defensive back line of Boden Sabasteanski, Jacob Noonan, Dustin Noonan, Ryan Abbotoni, Keegan Brooks and Devon Harnden, and defensive (holding) midfielders of Cam Joyce, Connor Cummings, Sean Cunniffe and Alec Brooks.

Gabaree had six saves to complete the 1-0 shutout.

In the championship game against York, Windham started quickly and got a score within the fifth minute off of a direct kick outside the penalty area by Hayden Bilodeau. The team exhibited excellent ball control and passing by controlling the middle and switching fields in their offensive attack.
In the match two goals were added by Keegan Brooks with assists by Ethan Wert and Boden Sabasteanski. Simon Gabaree and Ryan Abbotoni combined for five saves in goal for the 3-0 shutout to clinch the state championship.

The Windham U14 team, which is 19-3 with 5 draws on the season, had 12 shutouts through the season and has been asked to represent the Soccer Maine U14 division in the New England Invitational in Pembroke, NH on November 12th for three matches versus the top teams from Vermont, Rhode Island and New Hampshire.

Posted by Michelle Libby at 2:00 AM