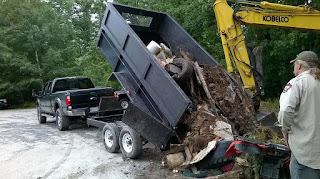 Tis the season to think about snowmobiling!  The Windham Drifters Snowmobile Club has been busy preparing for the upcoming season since the late summer months.  The Drifters are a group of snowmobile enthusiasts who donate much time and effort each year to provide a trail system for all to enjoy in the Windham area.


Much of the work and efforts each year is spent on landowner relations.  With the growth of the town comes new landowners and development.  In order to keep the trails open, the club contacts each landowner annually to gain permission for access.  As many clubs are aware, landowner relations are critical to the success of the club.  The State of Maine recognizes the importance of landowner relations and work with clubs to retain access.


One way the state has improved relations is by creating the annual “Landowner Appreciation Day”.  The day was created to clean up illegal dump sites throughout the state.  This year it happened on Sept. 18th.  Four members of the WDSC participated in the event.  Members cleaned up sites on land owned by Phinney Lumber and Central Maine Power Co.

The photo shows the approximately 9 cubic yards of illegally dumped items that were gathered along the Windham Drifters trail system.

The state provides sites for clubs and organizations to bring the illegally dumped items and it is managed by the Inland Fisheries and Wildlife Deptartment.  The thought behind the day is to create good relations between the landowners and the people who use their land.

The Windham Drifters also show thanks to the landowners in Windham by organizing an annual “Landowner Dinner”.  The club provides a free dinner at a local restaurant to all Windham landowners that allow a club trail on their property.  This year’s dinner was provided by the Deck House in North Windham on Saturday November 5th.  These dinners give the club an opportunity to build relationships with the landowners and discuss issues they may have involving the trails.  Every dinner is always a success!

The Windham Drifters would like to take this opportunity to thank all those that support the sport of snowmobiling.  It takes many contributors to make this sport in Windham successful year after year.  If you have any interest in getting involved, please join the club and come have fun with a great group of snowmobile enthusiasts.  You can learn more at www.windhamdrifters.com and you can find us on Facebook.
Posted by Michelle Libby at 2:00 AM