It was shaping up to be a perfect night for football as the crowds took to the bleachers to watch the Eagles (3-2) take on Scarborough (4-1) in Windham’s Homecoming game last Friday, October 6.


Family, students and spectators had their sweatshirts and blankets and were prepared to root for their Windham Eagles, as it was almost time for Friday Night under the lights. As the clock wound down to game time, excitement was in the air; Windham was fired up and ready. The Eagles took to the field with intensity. 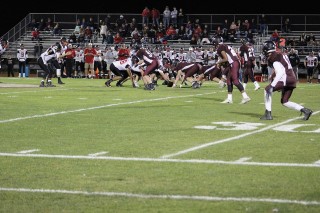 Scarborough scored in the first quarter, which only energized Windham to come at Scarborough with more power.

Windham’s defense was tight blocking some key touchdown opportunities for Scarborough.
Scarborough scored a couple more touchdowns in the first half, but that did not diminish the mood of Windham players or the mood of their crowd.

Windham did not get discouraged after a couple Scarborough touchdowns; they were determined to turn it around.

You may think Windham might have gotten a little down, but they definitely weren’t.

“Let’s get fired up!” was overheard from a Windham player, only emphasized that they were not 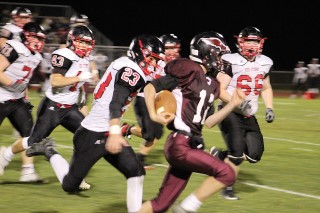 ready to throw in the towel.

A quarter later, Windham fought the good fight, but in the end, the final score was Scarborough 66, Windham 7.

“I think the kids played hard, we had a lot of injuries,” observed Coach Matt Perkins.  “And young guys had to step up and I think they did a good job.”

This was a tough loss, but it wasn’t for a lack of trying. Keep up the good work, Eagles.
The Eagles next home game is Friday, October 20th vs. Bangor at 7 p.m.

Posted by The Windham Eagle at 4:30 PM