How to: Start by placing both feet about shoulder width apart on top of a resistance band. Have a firm grip on the handles and supinate the wrists. This can be achieved by rotating the wrists so that the palms are facing outwards. Once this position has been achieved, flex the arms by bringing the hands towards the shoulders. Once the arm is fully flexed, slowly lower the hands back to the starting position, keeping the palms facing outwards the entire time (this will focus the exercise primarily on the biceps). Throughout this entire movement the elbows should remain fixed in one spot by the side of the body. Allowing the elbows to move increases the involvement of other muscles during the exercise, this will decrease its effectiveness at strengthening the biceps. 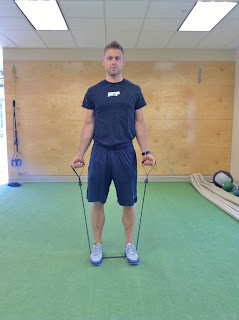 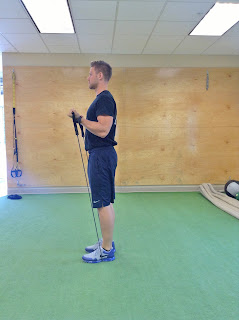 What is strengthens: This exercise is a single-joint/isolation type exercise which means that, if performed properly, should strengthen the biceps only. There is also some strengthening of the forearm musculature because it requires the gripping of the handles.

Equipment needed: Resistance band (preferably one with handles attached to each end).

Modifications: It is very easy to modify this exercise, but it requires having different levels of resistance bands. To make this exercise easier simply use an easier band with less tension and to make it more challenging simply use a band with more tension. There are many different colors of bands, but typically the lighter the color the easier the band. Another easy way of distinguishing between bands is to look at the width of the band.

Posted by Michelle Libby at 5:28 PM